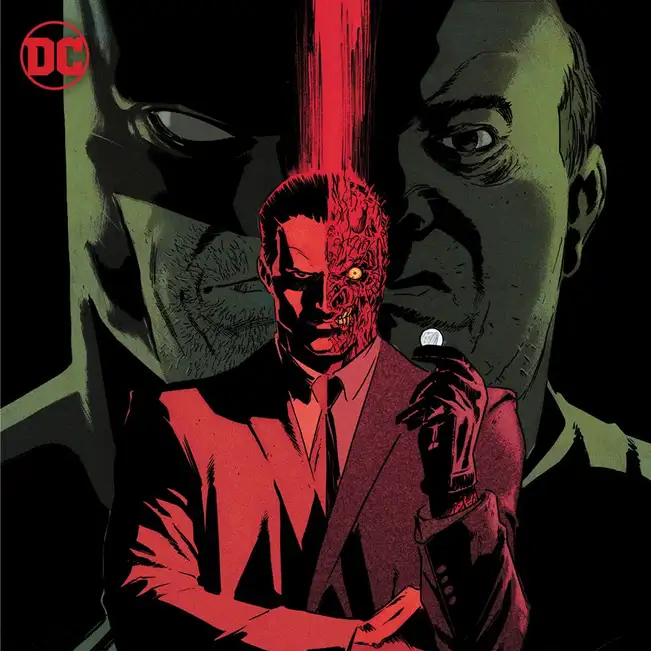 Overview: In Batman: One Bad Day-Two-Face #1, Batman aids Harvey Dent in trying to unravel who put a death threat out on Harvey Dent’s father’s life.

Synopsis (spoilers ahead): Batman: One Bady Day-Two-Face #1 begins years ago, as Two-Face holds a young man over the edge of a building. The GCPD has the building surrounded down below, and Batman asks Commissioner Gordon to hold off firing upon Two-Face for a few minutes while he intercepts. Down below, one officer tells Christopher Nakano, then an officer, to extend the perimeter.

Batman beats his way through Two-Face’s thugs. When he reaches Two-Face, a police sniper takes a shot at the villain and misses. Two-Face drops the young man, and Batman ropes the youngster before he plummets to a grisly death. Gordon arrives, and Two-Face is arrested.

Batman and Gordon talk about Gordon’s theory that Harvey might not still be in there, just Two-Face. Gordon still believes, reminding Batman that Harvey isn’t gone.

In the present, Two-Face meets with Mayor Nakano, who begrudgingly offers the former villain a chance at being district attorney again. Harvey graciously accepts, noting that he wants to make good on this trust.

That night, Dent meets with Batman. Dent tells Batman that his father is celebrating his eighty-eighth birthday. Dent received a death threat for his father, whom he says is responsible for all of the good parts of Harvey’s character. Dent can’t make out who sent it, and despite this threat, his father won’t move the date of his birthday party. Harvey asks Batman to look into the threat and make sure his father is protected.

Batman goes through all the people who could have a vendetta against Harvey Dent, including other rogues, members of the Bat-Family, and members of City Hall. Batgirl (Stephanie Brown) shows up and asks Batman to chat with her out in the fresh air of Gotham City. Batgirl suggests that Batman is giving Two-Face special treatment because of the gray area he walks between friend and foe. Her opinion is influenced by her relationship with her father, the Cluemaster.

While Batman doesn’t outright say it to her face, he admits that Batgirl is right. He must consider that Two-Face created this threat himself, if not some other member of his family.

Time goes by, and Oracle tells Batman that she’s come up with nothing. There’s no word on the street, and the note turned up no fingerprints. Batman relays this to Harvey Dent, affirming that he’s still going to look into it.

On the night of the big event, Cassandra Cain and Stephanie Brown both infiltrate the event and look for clues. Batman keeps watch outside. Near the hour of Harvey Dent Sr.’s speech, Batman notices that the GCPD guards have been taken out. Cass and Steph realize that the balloons are loaded with noxious gas.

A cake is wheeled in, and when Harvey Dent pulls the sheet, there’s a message written to his father. It’s signed, “Love, Two-Face.”

Batman fights some goons outside and makes his way to the roof. Cass and Steph clear the ballroom and then attack some goons inside while in their Batgirl attires. Batman throws a batarang into the glass roof, letting the balloons out before they can release gas.

Two-Face melts half of his father’s face, telling his dad that this two-faced look is their family’s legacy. Batman intervenes, battling with Two-Face. Batman realizes that this night was about getting witnesses to see. Harvey wanted to see Batman, and Two-Face wanted to reveal who his father really was.

Batman apprehends Two-Face, but it’s at the cost of Harvey Dent Sr.’s life. The old man killed himself because he couldn’t live with his new face. In Arkham, Two-Face taunts Batman.

Later, after the funeral of Harvey’s father, Batman tells Batgirl that Two-Face did it because he was both Harvey and Two-Face. They both got what they wanted. Batman rides off, thinking of his enemy and his friend. Two-Face, from Arkham, thinks of Batman as both his enemy and friend.

Analysis: One of the highlights of Batman: One Bad Day-Two-Face #1 is its moody and grotesque art. Artist Javier Fernandez makes great use of space and showcases some real serious showstoppers. There are some particularly nasty and mortifying images of Two-Face’s scarred side that are nightmare-worthy. These are peppered throughout an issue that has a great, noir-inspired atmosphere in a Gotham City-scape that looms larger than life.

Colorist Jordie Bellaire excels in bringing out the grimy color beneath Gotham’s darkness. Even in an issue one could argue is more horror-inspired, Bellaire’s coloring brings out some truly vibrant moments that evoke a sense of awe and admiration.

The story, however, is where this issue falls flat. While there has been a little teasing in Ram V’s run on Detective Comics, Harvey Dent’s return as a law-abiding citizen still feels like it came out of nowhere, especially when paired with the idea that Mayor Christopher Nakano is making Dent the district attorney again.

What’s worse is the progression of the mystery. After getting a death threat on his father’s life, Harvey Dent calls Batman to investigate. Batman turns out to have no clue as to who it could be, and he even agrees with Batgirl (Stephanie Brown) that Two-Face could have issued this threat himself. Batgirl is proven right near the story’s climax, as it’s revealed that Two-Face threatened his own father.

First, Two-Face scars his father’s face to look like his own. Occupied in his battle with Batman, Two-Face isn’t there to witness the result. Dent’s father, unable to live with the physical scarring, takes his own life. It’s also a not-so-subtle reveal that Dent’s father isn’t the white knight that the people of Gotham City claim him to be.

If this story sounds familiar, much of the themes and plot threads in Batman: One Bad Day-Two-Face #1 were also featured in the exemplary Batman Annual #14 (released in July of 1990). In that annual, it’s revealed that Two-Face’s father was an abuser who used to flip a coin as a “game” to dole out abuse for a young Harvey Dent. Batman has suspicions that Harvey isn’t who he seems to be even before becoming Two-Face and is proven right when, after getting acid thrown into his face, turns into a killer who ultimately goes after his own father. The difference in the annual is that Batman arrives in time to stop Two-Face from murdering his abusive father.

It’s reasonable to assume that these two stories, the annual from 1990 and this newest One Bad Day story, don’t exist in the same canon. If they did, it wouldn’t make much sense. However, the old annual overshadows Batman: One Bad Day-Two-Face #1, serving to highlight a sloppiness in the plotting of this present-day story. It’s a retread that even highlights its own shortcomings in the form of Batgirl, who quite literally reveals the whole game to Batman by illuminating her own trauma with villains who blur that line of friend or foe.

Ultimately, this story wants to hit at something deeper about the relationship between Batman and Two-Face, about Batman’s desire to trust Jim Gordon when he believes that Harvey Dent is still there. It just comes up short, undermined by a mystery that’s more of moving chess pieces around a board than an actual breadcrumb of clues that lead to a greater understanding.

On a final note, while Batman: One Bad Day-Two-Face #1 wasn’t the defining comic book many expected it to be, Mariko Tamaki is an incredible writer and talent, and her work on Detective Comics stands among some of the best Batman stories out there.

Batman: One Bad Day: Two-Face #1 is a beautiful book that lacks the punch of a true mystery to give all of its themes the weight and impact that the story so desperately intends.