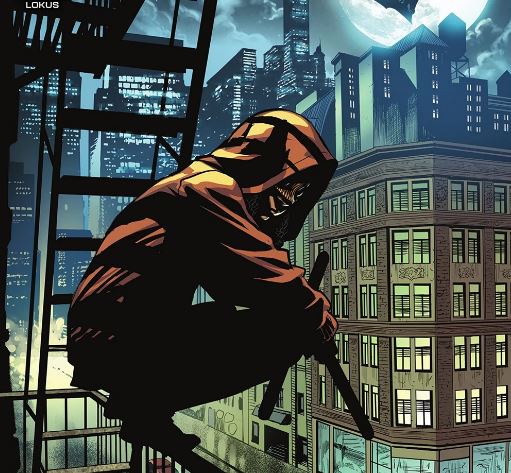 Overview: In I Am Batman #14, we see the conclusion of the arc featuring the Question while Dark Crisis lurks ahead.

Synopsis (spoilers ahead): As I Am Batman #14 begins, Batman and Question give Tony and his activist buddies the lowdown on the Anarky case.  The only question remaining is who killed Anarky.  That is really not a question, as Tony did it.  Danny Chan, the original victim was really a police informant and was feeding information to the officers the group protested against.  Tony found out, so he killed him. Anarky was killed when he started looking into the case.  Anarky was shot at point-blank range in the chest. Anarky would only let those he trusted near, and he trusted Tony.  With this information, Question and Batman are attacked by Tony and his people.  The two vigilantes quickly put an end to the fight.  As a final statement, Tony accuses Batman of fighting with the oppressors and not against them.  The police wrap up the scene leaving Batman and Question to have a final conversation about human nature and their gray nature.

In Queens, Kayln is being goaded to commit a robbery by her friends.  They give her a gun and tell her to show them what she’s got.  Kayln takes the gun, and soon she is face to face with a new mask in New York.  The vigilante, Tiff Fox, tells Kayln to drop the gun.  She does without much convincing and runs away right by her “friends.”  Tiff encounters the gang and quickly takes them out.

Chubb and Whitaker get the call and respond.  The detectives arrive just as Tiff finishes up, and she runs with Chubb close behind her.  Not knowing Tiff’s identity, Chubb tells her to stop, and Tiff hits Chubb.  This angers Chubb, and the detective throws off her coat and engages the vigilante.  Tiff gets the upper hand in the fight, but more cops show up, so she runs off.

Renee and Hadiyah meet for coffee.  Renee has decided not to pursue the New York commissioner opening. She has too much to do in Gotham, and she is not ready to leave just yet.  She seems to encourage Hadiyah to apply for the position.

Back at the fight scene, Batman arrives, and Chubb gives him a surveillance photo of the new vigilante.  Batman recognizes Tiff but says that he does not know her.  Chubb walks off, leaving Whittaker and Batman. Whittaker mysteriously goads Batman to strike him, and the man nearly beats him to death before Chubb pulls him off.  We see Whittaker’s eyes glowing.

Analysis: The art in I Am Batman #14 is top-notch.  The detail is exquisite, and it really looks like the characters are in the city.  For example, the last page shows a shining moon.  The coloration of the moon makes the ball in the sky masked by clouds appear to glow in the night sky.

On the character side of things, I am a little disappointed.  I would have loved to see more of Renee Montoya.  Having her as a recurring character, given that she is female and queer, would have been a welcome addition, but I understand that this is about Jace Fox and his coming in as Batman.

To include Tiff’s arc in this is a welcome addition to the story.  Her story needs to be told. She is suffering trauma and to see how she is coping and growing is a welcome addition to this story.  I do want to see her family rally around her as they have done for her older sister, who is suffering physically. The inclusion of mental and emotional pain is really what any Batman book should be about.

For someone who really is not in the day-to-day happenings of the DC Universe, the inclusion of the Dark Crisis is a little off-putting.  I am not following that story, and I get weary of how and why everything in the DC catalog of characters have to be involved in the big crossover event of the day.  I will hold my opinion of that until the next issue.

With the awesome art and the poignant storytelling in addition to the minimum number of white characters, I still find this title to be a breath of fresh air. It gives an excellent closure to the Question arc as well as continuing to bring in the many side characters and giving them their time to shine in the sun.