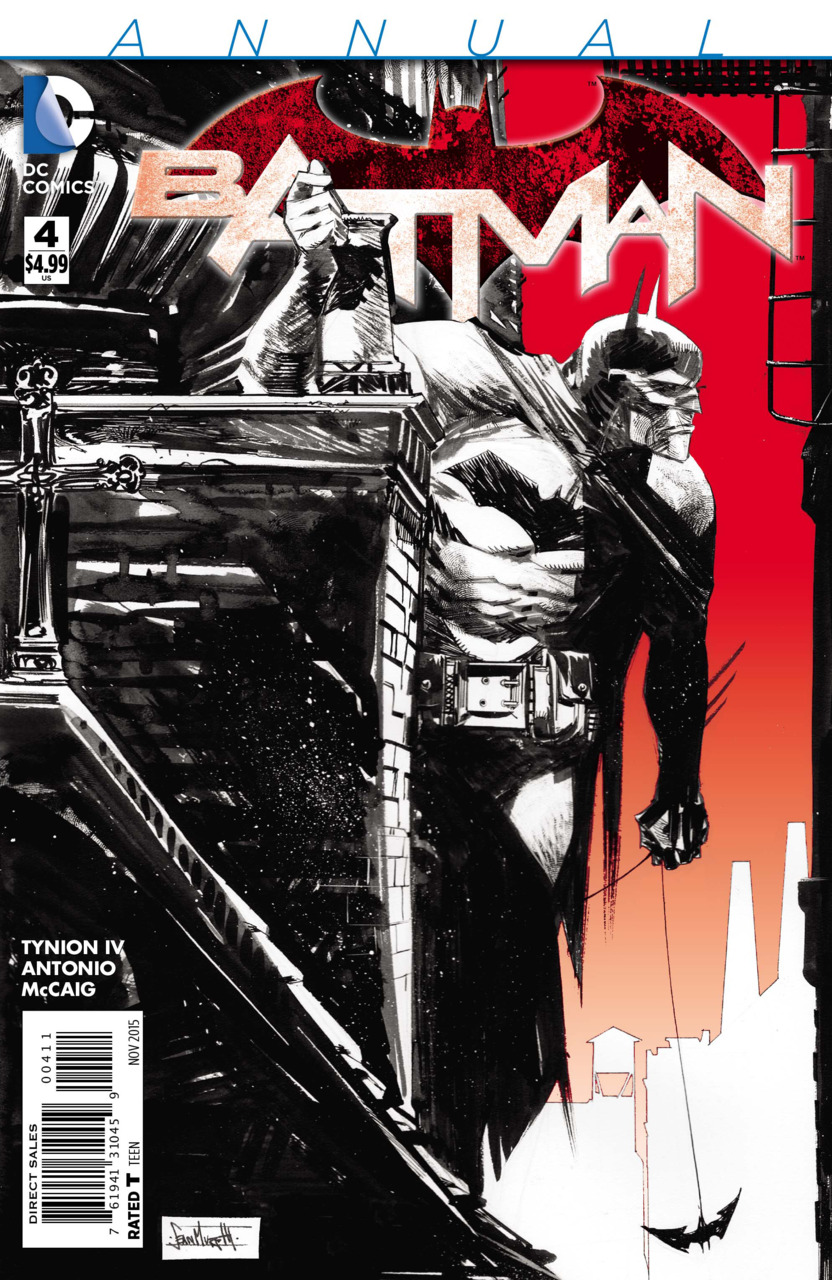 So often, it seems as though DC through a Snyder’s name on these annuals so that they sell more. I guess they forget that it’s a Batman book, and it’s going to sell anyway. So, you could say that I was thrown off by the fact that Scott Snyder’s name was no where to be found in this book. And you know what? It was still good.

James Tynion has done quite a bit of work on Batman over the last few years. He’s done some work on annuals in the past. He did some backup stories for Zero Year (with which a discussion with Dustin got me this job) during the Court of Owls, and the spinoff series – Talon. Now, this story is by no means perfect. But I really enjoyed it as an annual. It barely has any Batman in the book. It’s about Bruce going home; about getting over your past.

It’s by no means a MUST READ, but it was an enjoyable single issue that catches you up on what Bruce has going on. Roge Antonio is on art for this issue, and although I’m not familiar with him, I thought he did a great job. His style is very similar to Rafael Alburquerque, so if you like him, I’d check this guy out. Dave McCaig is on colors, so that probably contributes to that same feel.

On a stormy night (it’s Gotham, of course it’s dark and raining), Bruce and Julie are heading back to the mansion. They go inside and meet up with Alfred, suggesting that they get married in the gardens. Bruce seems uneasy in the home though, but continues on. Geri Powers is there as well. She has bought the manor back, and wants to give it back to Bruce. He’s not very pleased about getting the manor back. Geri goes on to explain that all the inmates have been transferred over to a wing that Blackgate prison has developed until a new asylum can be built. The last three, they moved earlier that day: Clayface, Mr. Freeze, and Riddler. And they took very careful precautions in moving each of them. Alfred wants to keep the Manor in the Wayne family, and Geri takes them into a room with all the paperwork. Alfred notices that the room is significantly smaller and asks if any other work was done. Clayface IS the room and he swallows up Alfred and Julie. Geri tries to radio for help, but Riddler activates a com-jammer. Clayface swallows Geri next, and the group talk to Bruce for a bit. Mr. Freeze goes to move him into the next room, but he is greeted by Alfred, who is armed with a shotgun. He takes a few shots at Freeze, grabs Bruce, and they head into a secret tunnel system hidden in the manor.

Alfred takes him to an armory, giving Bruce a rifle, telling him to at least hit them with it. He also explains to him that HE built all this because he was always prepared. He even has a secret word that drops the chandelier in the main room. Mr. Freeze separates them by creating a wall between the two, and they get into a fight. Bruce looses him, and the villains taunt him with his parents, Julie, and their knowledge of his past. Riddler keeps asking Bruce to answer the question to who he is, and finally he yells that he’s crazy. That after his parents death, he used his money to fund Batman, who they hate for all the abuse. It’s spawned from Bruce’s craziness. They are going to get revenge for what he has done by shooting Julie. Bruce pulls up his riffle and shoots in Nygma’s direction, but he wasn’t shooting at Riddler, he was shooting at the com-jammer. He says the secret word that drops the chandelier, taking out Clayface and Freeze. Bruce goes on to explain that Nygma is the real crazy one for holding a grudge so bad, that he would try to kill innocent people to get to one man.

The GCPD take the REAL villains this time. Bruce give a look at the manor as the sun sets, and says “Maybe the gardens wouldn’t be a bad place to get married.”