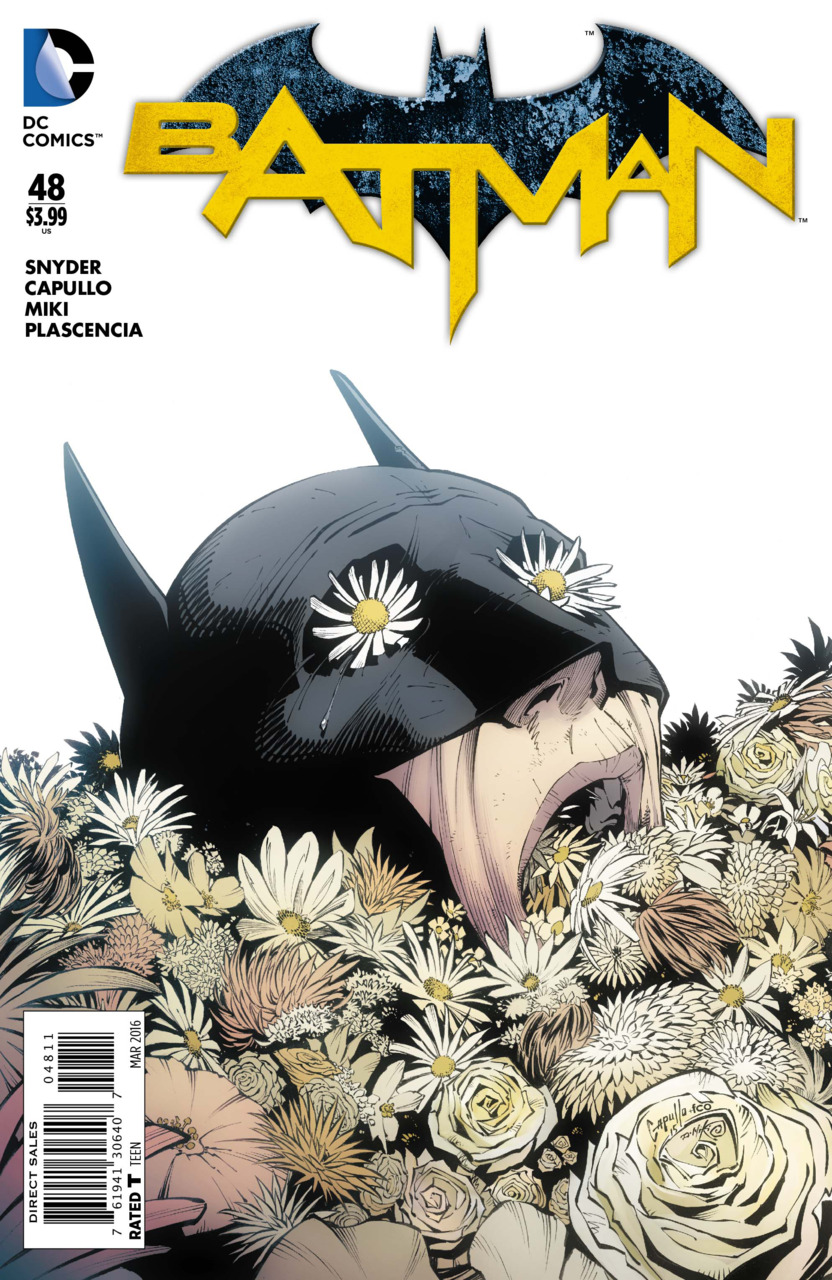 Okay, so this issue was amazing. It does something that most fans love to see — a chat between the protagonist and the antagonist. In fact, it does it twice. Although one isn’t very memorable, the other stands out as the highlight of the issue — and possibly as the highlight of this story arc, so far.

Scott Snyder delivers a tight script that shows off his skill of building tension, as well as terrific flow and pacing throughout the issue. Although it is a bit dialogue heavy, I feel it fits the situation, and actually adds to the moment instead of taking away from it. The freaking thing reads like a beautiful song that has you on the edge of your seat… In fact, you could probably read it along with some of Hans Zimmer’s scores, and it’d fit perfectly. It’s when I see beauty done like this, I see why people like Snyder are in this business, and I’m not.

Greg Capullo delivers some very unique storytelling techniques to the table. He does some panel layouts that never repeat on a single page. His facial expressions, body language, attention to detail, storytelling, as well as building the tension throughout — make this a solid A+ for Capullo.

I really do love Danny Miki’s inks over Capullo’s pencils. He does such an amazing job complimenting his work. You can clearly see the guy knows when to add a little more line-work, and when to lay off and when to let the negative space breathe on a page.

FCO Plascencia’s colors are still amazing. You can still see the differences in the color palate if you look closely, but it’s not as noticeable as before. I do like the shift in tones and changes in the grain that he gives from scene to scene. It allows for the mind to adjust on a subconscious level.

If it feels like Batman has been a great book because they always have the best guys in the business working on it at all times, it’s because they do. Some people like to compare the letterer to the kicker of your favorite football team, but that’s not it… the kickers still get noticed more. Letterers are more like the holder for the kicker — only noticing him when he messes up and drops the snap. Steve Wands has been so freaking consistent as a letterer, and his placement is impeccable. Although, it helps to have a pro like Capullo leaving you space for letters, but hey, Wands gets lots of credit for that here, too.

Recommendation – Buy! This issue of Batman was a work of art. If you’ve dropped out because Bruce isn’t Batman… You’ll be sorry. You’re missing a great story.

We open with a confusing single page, that foreshadows the coming scene, that will probably make more sense later.

We continue with where we left of on the final pages of last month’s issue — With — I’m gonna just call him — Joe, sitting on the park bench with Bruce. Joe strikes up a conversation about the accident that he was in, how he has no recollection of the man he was before, how he wasn’t sure if he wanted to live anymore, and how he thinks Bruce can make a change for the better. Joe also makes some poorly timed, not very funny, easily-taken-the-wrong-way kind of jokes, which added to the suspense in a masterful way. The conversation these two had was fascinating to me. Here we have two enemies, who no longer know they are enemies, catching up and — in a way — breaking the fourth wall. Here, the two have this conversation about their life… if any decisions they make really matter… if they are doomed to just fall back into a pattern of the same old life they had before… You know — Comics!

Meanwhile Mr. Bloom has wrecked the Batvan. So he and his other hims decide to grow thirty to forty foot tall, grab a hold of Gordon, and then go rampaging through the city King Kong style.

Joe and Bruce’s conversation has gotten pretty intense when Joe puts the gun back to his head, and threatens to pull the trigger. We believe he does for a brief moment, until we realize that the sound was an explosion taking place in Gotham City. Bruce runs toward the explosion, but turns around to check on Joe, only to find nothing… There’s no sign of him.

Bloom informs the city that he has planted seeds all over the city, and anyone can have one. He wants to destroy this city, and remake it in his image, and he’s giving other citizens the opportunity to help him. However, this is turning some into human bombs, causing explosions throughout the city. Bruce makes his way to the shelter, but one of the young girls has taken a seed. She stretches and mutates, and seemingly causes an explosion inside the shelter.

As we close out, the Robo-Batsuit army has been deployed, people are fighting over seeds, some high tech device is about to malfunction, something’s wrong with Duke’s parents, and Gordon looks like he’s about to croak. Alfred is sitting at home watching all this on the news, as he begins to hear banging on his door. He refuses to answer it, as his worst fears are on the other side — Bruce knocks down the door, demanding Alfred to take him to his cave.

Closing thoughts – Snyder masters the art of pacing and delivers the most compelling issue of Superheavy yet, as we approach the climax of the story.