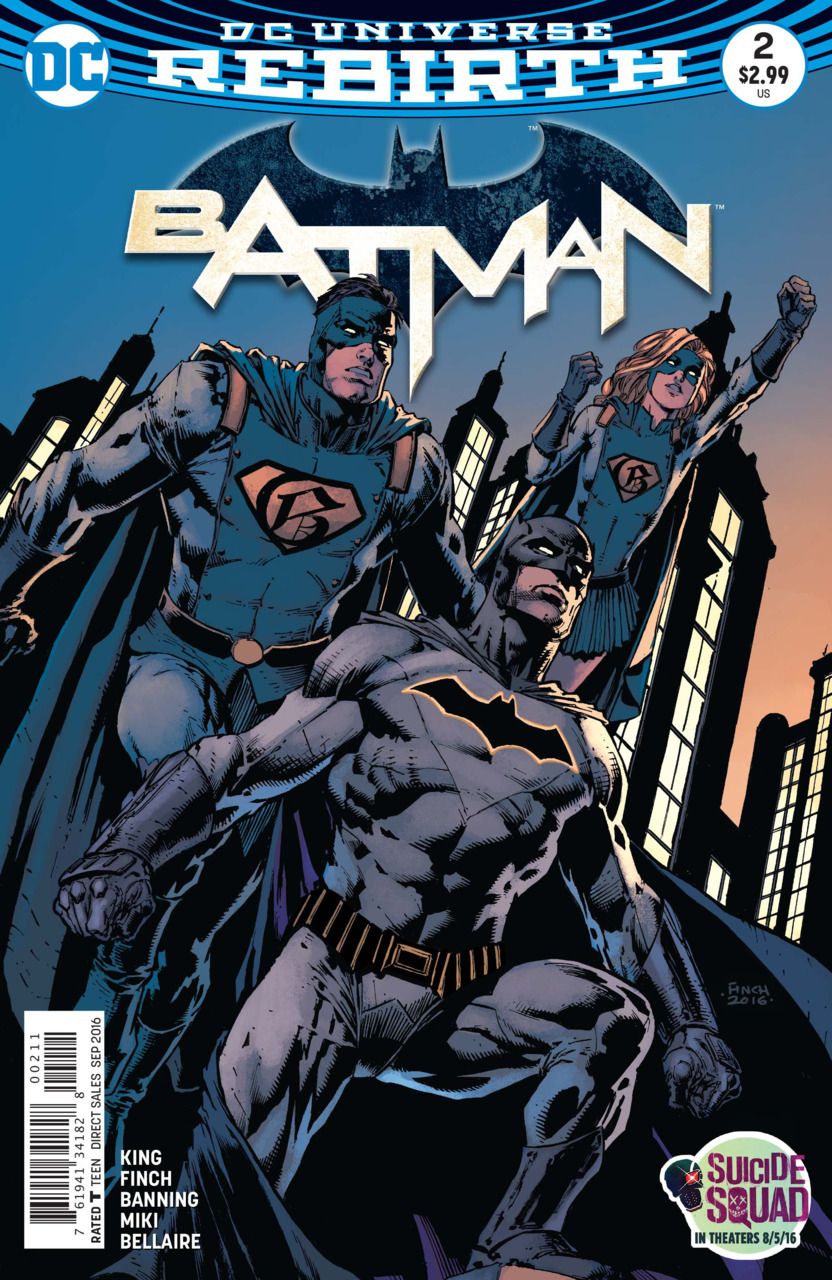 The bi-weekly adventures of Batman and company continue with Batman #2, which wastes no time in getting down to business.  First, we have the re-introduction of another classic villain, Solomon Grundy, whose only appearance during the New 52 period was his reimaging in the pages of Earth 2.  This version is back to the roots, poem and all.  He’s tearing up the streets of Gotham and fighting against the newly introduced Gotham and Gotham Girl.   As Grundy flees from the pair, Batman appears from nowhere and quickly puts an end to the rampage.  There is a brief exchange between the heroes wherein Batman compliments their actions, buts urges them to be more cognizant of their surroundings, as Batman’s interjection into the fray saved the life of a bystander.  Understanding Batman’s point of view, Gotham (hero, not city, this could get confusing) expresses their desires to do just that, be better heroes, and he thinks Batman can help them with that.

Back in the Batcave, Bruce Wayne ruminates on his own mortality, and that of his heir apparent, Dick Grayson.  Eventually they will both be killed in the line of duty, whether it’s something small or large, it’s inevitable.  His soul searching comes to end as Alfred politely but firmly reminds him of his obligations to a fundraiser being held in the manor above.  Across the city, Jim Gordon is deeply entrenched in his own personal world when a representative from the bank comes to see him.  Only, plot twist, he’s not from the bank at all.  That was a ruse.  He’s really the person who set Grundy loose on his earlier rampage.  Gordon questions him, only for the man to take his own life, while warning Gordon that “The Monster Men are coming… aren’t they strange?”

Gordon sends the Bat-Signal into the sky and Bruce Wayne reflexively skips out on his latest way-to-beautiful-to-be-real “friend” and heads to the Batcave.  Along the way, Duke makes an appearance to remind us that he’s still there.  He questions Bruce’s plan on including the Gothams in the meeting with Gordon, but Bruce thinks they need to know.  On the rooftop Gordon takes the appearance of the duo in stride, and informs the hero of his interactions with the man who took his own life.  Gotham Girl makes the connection between that incident and the one from the previous issue where the Kobra agent fired on the plane, taking his own life afterwords.  Gordon also brings up the vague threat of the Monster Men, only to find out the heroes are just as in the dark as he is.  Batman pulls a Batman and disappears, perplexing the Gothams as they can find no trace of him, even with their heightened abilities.  Gordon merely shrugs it off, he is the Batman after all.

The issue closes with the reveal of the arc’s main antagonist, Professor Hugo Strange, and the introduction of his patient, Roger.  Of course, it’s just not Batman without a twist.  This time around, Strange appears to be working with none other than Amanda Waller of Suicide Squad fame and General Sam Lane.  And they believe Gotham has finally been saved thanks to some machinations of Strange.

I’m not going to lie, the opening of this issue was somewhat jarring.  For a brief moment I thought I might have missed an issue.  It’s a small complaint, but I was really looking forward to seeing more of the initial meeting between Batman and the Gothams.  Of course, King’s got to keep some mystery to that for the time being, so he hit the fast forward button and got us to the next team up situation.  That being said, I’m enjoying the Gothams.  They aren’t perfect specimens like their possible distant relative Superman.  They have all the power, but what they don’t have speaks volumes.  The ability and drive are there, but they lack approach.  Something Batman can help with, if he decides they are worth his time.  Which they seem to be.  Other standouts were Alfred, who steals every scene with his droll sense of humor, and Gordon, who seems to have relegated himself to accepting the fact that his world in which he operates and attempts to maintain order is completely absurd.  Batman is a great solo character, but my favorite moments have always been when he is playing the straight man to his supporting cast.   This is why the extended Bat family is so important.

David Finch and the ink team put in decent work.  The poses weren’t terribly dynamic, but the pacing was solid and the camerawork kept things from getting too stale.  Bellaire, as always, beautifully colors the pages.  The contrast between the Gothams costumes and the city from which they take their names is a story unto itself.  If it came down to “Who did it better?”  I’d support Mikel Janin over David Finch.  His pencils are livelier and fit more in line with the rejuvenated Batman.  Finch’s approach seems much more in line with the frowny, battle worn character from previous years.  Just my two cents, take it as you will.