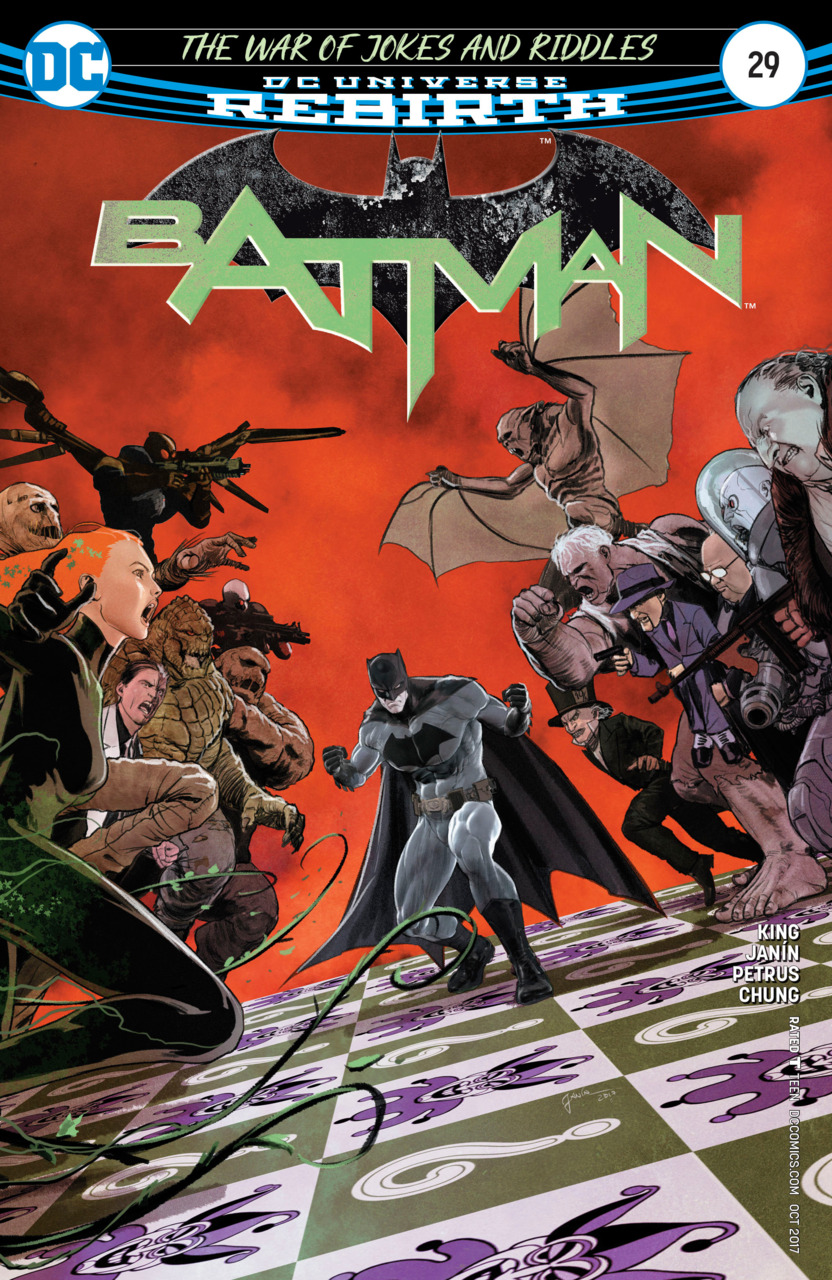 Overview: We’ve all had the fever dream where Batman has a full nine-course French meal with his rogues gallery, right?  In the pages of this issue, Tom King and Mikel Janin bring those dreams to life as Bruce Wayne takes a cue from his mother’s socialite playbook and holds a sit-down with the figureheads behind the War of Jokes and Riddles in an effort to bring about the end of Gotham’s suffering.

Synopsis (spoilers ahead): With no end in sight to the war, Batman switches up his strategy and approaches Joker and Riddler in his civilian identity.  Played out against the backdrop of the dinner, Bruce Wayne talks through the various issues each villain has with both the Batman and the other.  All of this is under the guise that he will be giving the hefty sum of one billion dollars to the individual he deems worthwhile in an attempt to fund the ending of the war.

Peppered with the occasional joke or riddle, the dinner conversation flows as one would expect with the cast at hand, eventually veering into confrontational territory before Wayne guides everyone back to the matter at hand, ending the war.  He knows both sides want Batman in order to be the one who kills him.  Riddler’s fantasy of Batman’s death is rife with symbolism and meaning as he methodically plots out killing the Bat-Family while Batman watches helplessly before his own demise.  Joker’s approach of strangulation is raw and straightforward.  The next matter covered is why each person thinks they should be the one to kill Batman over the other.  Again, Riddler’s well laid out thoughts are elegant in that he has deduced Joker is a phoney.  All of his possible origins are fiction and he, in reality, is no more crazy than anyone else.  His entire persona is an act.  Joker’s rebut is simply “Who cares about the Riddler?”

With both sides having presented their cases, Batman excuses them before the coffee course.  He will have Gordon contact them with his decision.  Back in the Batcave Bruce Wayne reveals his true intentions – Batman can’t stop this war, but he may be able to finish it by taking part and joining a side.

Analysis:  The War of Jokes and Riddles isn’t shaping up to be what many people expected.  Fans of the action from the last issue are going to be disappointed here.  There’s a lot of talking.  This isn’t to say that’s a bad thing, but it’s an interesting choice as we’ve now completed the first installment of the second half of this story and the action centerpieces have been few and far between.  I keep coming back to the thought that this isn’t that kind of story, but it’s still not satisfying.  I think King could walk the line between blockbuster and character piece a little more closely, live a little more dangerously so to speak.  There were a number of great moments in this issue which make up for the slight monotony of the story.  King’s apathetic Joker, the one-off jokes and asides are all things he continues to nail in the book, which makes it that much harder on me when the rest of the book doesn’t quite live up to expectations.  After the upcoming interlude, I think the success of this storyline is going to reside on the closing issues.  Things could go either way at this point.

Janin played it safe in this issue, which I respect.  He had a single splash page where he got to stretch his creative muscles, but for the most part this was a single-camera story involving a lot of repetitive shots.   He kept everything moving briskly, however.  Slight changes to facial expressions and body movements were key to keeping these pages from being outright boring, which would be a credible fear with some artists.  I’m not sure David Finch could handle this issue with the same ease as Janin.

Final Thoughts:  Alfred is the unsung hero of the DC Universe.  Not only can he run operations and repair the advanced technology at Batman’s disposal, the man can prepare a full course French meal for supervillains and not miss a step.  We’re getting closer the reveal of Batman’s mistake.  A few issues back, the comment was made that Joker lost his grin because everything had become predictable with Batman in the picture.  The Bat joining a side in this war seems pretty unpredictable; maybe even enough to bring that grin back to Joker’s face.

While on the subject of Joker, the depression vibe from the character is getting strong and Tom King is no stranger to the topic of suicide in his back catalog.  It’s probably just speculation, but Batman talking Joker off the proverbial ledge would probably be something he sees as an unforgivable act.  Well, we won’t be getting many answers next issue, as it’s the second part of the Kite Man (Hell Yeah?) interlude.  Come back and see if I’m sick of him or not.  Could go either way.