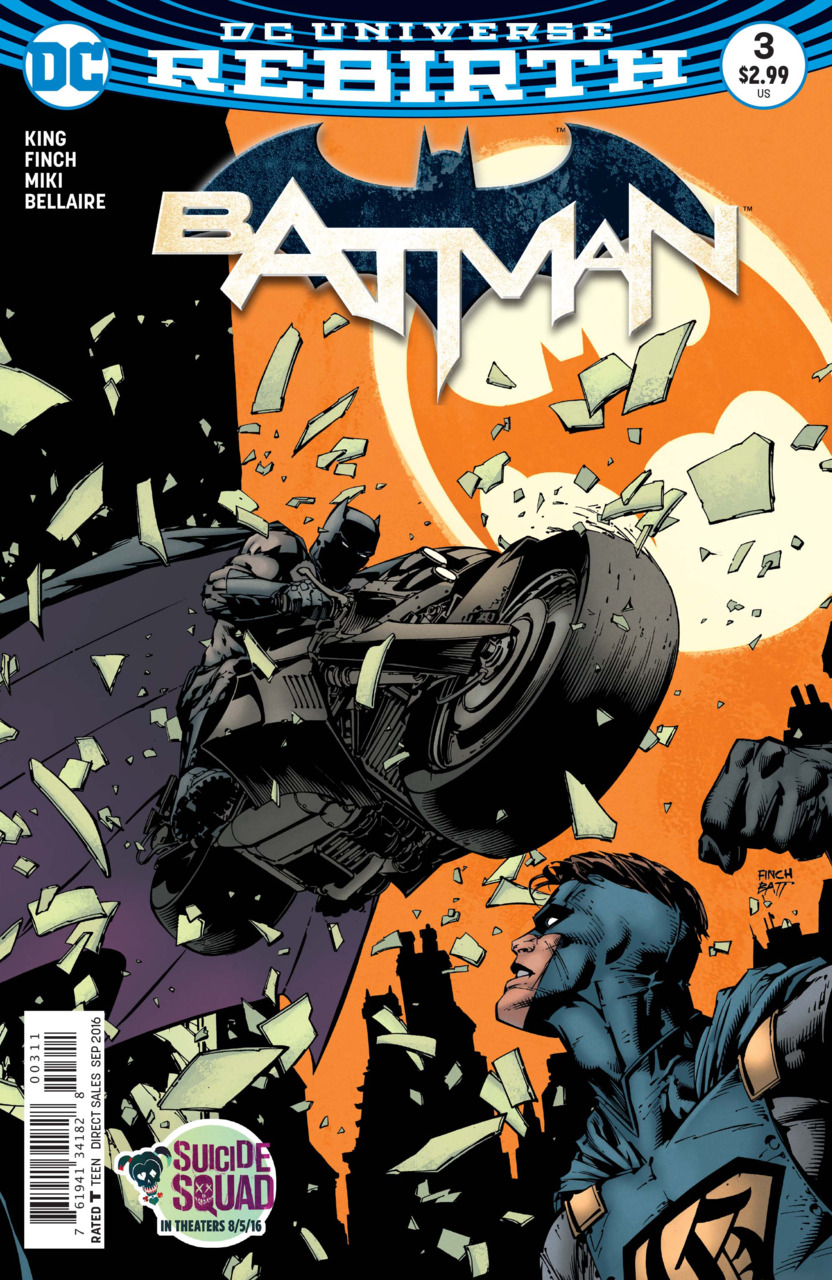 The scene is a familiar one.  A family, mother, father, and son, obviously enjoying their time together, chooses the wrong back alley to cut down.  The bad man makes himself known.  The scuffle ensues.  Just when we’re expecting those cascading pearls we know and love and have seen more times than we care to admit, our expectations are subverted.  Batman arrives just in time to save the day, violently putting an end to the situation like no one did for him.  After making sure the family is alright, he leaves them with his advice.  “…fight the fear.  Everyone gets the chance to be brave.”   Flash forward to now, the parents are older, and the father has been speaking with an unseen federal agent, opining on what it is to truly be a part of Gotham.  How to overcome the seemingly natural evil that resides in the streets.  How to stand up and say no.

The agent is investigating a strange financial transaction and its ties to the family.  The father recently wired a substantial sum to his children overseas.  He explains the family’s history, and how their son changed after their encounter in that dark alley.  How his focus began helping people and bettering himself.  His younger sister took up with him in his endeavors.  They requested the money, and the father didn’t think twice.  Soon, they returned home.  Just about the time a certain duo made their grand appearance.  The federal agent leaves, letting the couple know his name:  “Matches” Malone.  Ever the detective, Batman has easily deduced the civilian identities of his new partners in his war.  With the “who” and “why” off the table, the question becomes “how?”

On patrol, the Gothams respond to an explosion on a bridge.  Another person has committed suicide, warning of the coming of the “Monster Men.”  Batman joins them, quickly showing that despite the lack of superpowers, like the Gothams use to maintain the crumbling fixture, he can still save the day.  The Batplane remotely arrives, attaching new supports to the bridge, allowing the Gothams to focus on rescue efforts.   Another narrator begins his observations on how the city of Gotham affects its citizens, a much less optimistic approach.  Whereas the previous story showed the determination of humanity and the ability to overcome, this story is one of acceptance and the inevitability of fate.  Everything will eventually fall.  It becomes obvious the speaker is Hugo Strange, discussing his thoughts with Amanda Waller.  He wants to separate the darkness from Gotham.  Remove it completely instead of using it to overcome.  To be better than Gotham.

Batman and the Gothams discuss their success, Batman even complimenting their efforts.  Natural to his character, he doesn’t stick around long.  But, before leaving, he slyly references their first meeting in that alley so many years ago.  Their victory is shortlived, as another explosion immediately draws their attention.  They rush off, lightheartedly discussing their roles as superheros in Gotham.  Arriving at the scene, they come face to face with none other than Hugo Strange himself.  This is a trap.  Hugo also reveals his secret asset.  The master of emotions, Psycho Pirate.

King’s first arc has been moving steadily along.  We’re getting quick answers, but we’re not being given everything right out of the gate.  Just enough to keep us from being overly frustrated.  I’m actually somewhat surprised at how quickly we learned the basic backstory of the Gothams.  While the exacts of how they developed their Kryptonian-like powers is still a mystery, it’s nice to see that they are earnest in their desires to help the city, and there doesn’t seem to be any nefarious  desires on their part.  Also, Batman having little to do with their history aside from one pivotal meeting is a nice change of pace.  I wouldn’t be surprised if it comes to light that Hugo Strange played a part in their creation, but I’m hoping King stays out of that realm of thought.  I like that their origin thus far has been fairly autonomous.

The only downside I notice at this point is that the opening arc seems to serve no main purpose than setting up the impending crossover story.  I would rather have more focus on the interactions between the Gothams and Batman, maybe with a little Hugo Strange dropped in the background while the group focuses more on their working relationship.  A minor gripe, but a thought worth mentioning nonetheless.  It doesn’t distract me from my enjoyment of the story, and each issue is consistently improving upon the last in terms of quality.  The foundation of something good is being created here.  I’m happy to say there is life after Snyder.