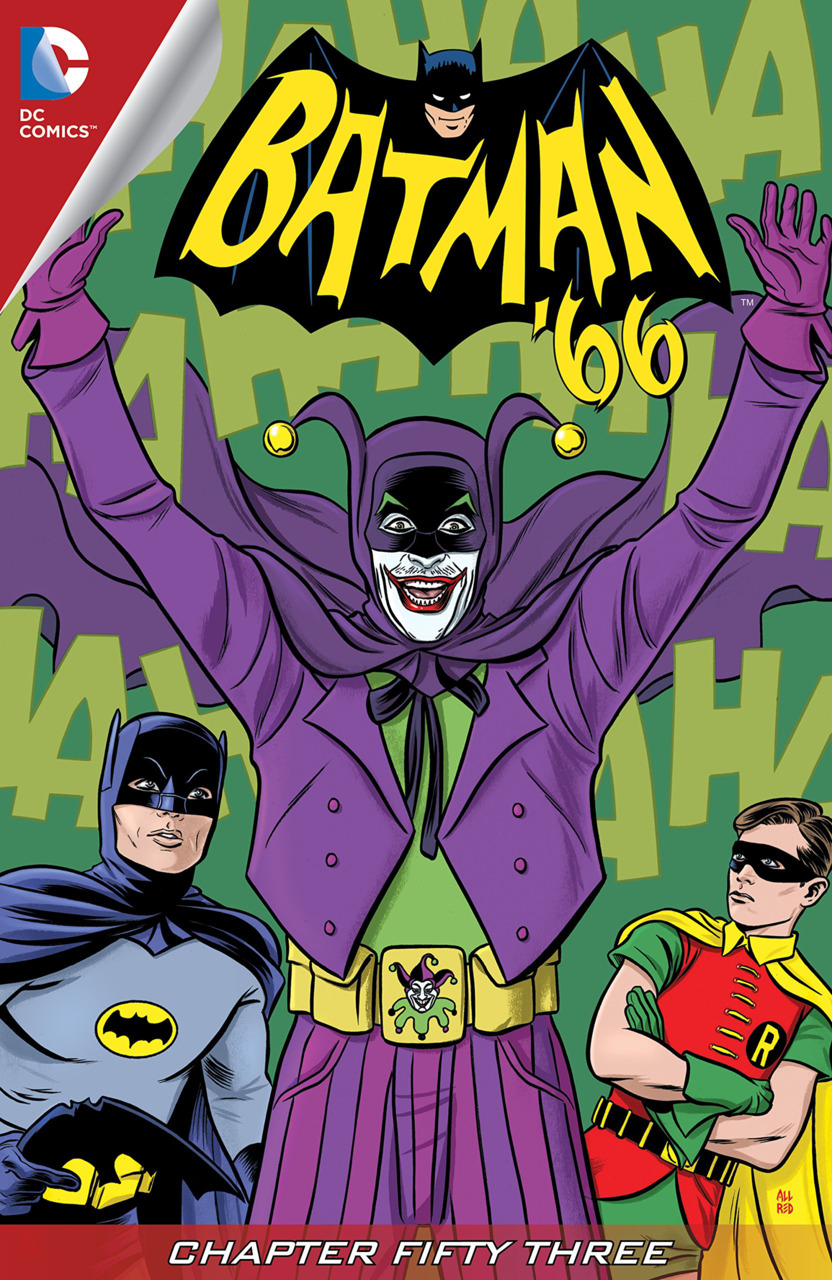 This week’s chapter opens in Gotham City where everyone seems to be enjoying a quiet peace…even the GCPD officers can be seen sleeping in their vehicles. We see that Jokerman and his “youthful” ward Gripper are on patrol inside the Jokermanmobile…now complete with a grimacing Jokerman face, Joker playing cards and giant boxing gloves mounted on the front.

Suddenly, a massive helicopter with an industrial sized magnet descends upon the peaceful metropolis, and we see a bank vault being pulled from its foundations and attaching itself to the magnet. A door opens, and pair of blue gloved hands drops hundreds of papers from the helicopter. The guard stationed at the bank snatches one of them and reads “Congratulations! You have just been robbed by…The Pillager!!!” Jokerman and Gripper suddenly arrive, too late to stop the crime.

Over the course of several panels, we witness The Pillager’s henchmen plundering more loot from Gotham City with Jokerman and Gripper only seconds too late to stop each crime. Over at Stately Wayne Manor, Bruce, Dick and Alfred discuss the reign of The Pillager and wonder whether it was too soon to retire Batman and Robin. Bruce is sure that Joker must be behind what is going on, and Dick hypothesizes that he originally tricked each of the villains he captured (last issue) into committing crimes that he thought up. Bruce and Dick agree that Batman and Robin are still not needed, but decide that there may be others who can discover what is going on.

That night, we see several masked robbers looting a jewelry store in the name of The Pillager. However, our villainous fiend finally appears alongside his sidekick Larceny Lad. The robbers hand over the jewels to Pillager and Larceny Lad as they ascend into the night. Jokerman and Gripper arrive on the scene and discover…that the robbers are still present. Jokerman seems confused about something, and pulls off his mask and demands to know where the loot that the robbers were after is. Over the next few panels, we see The Pillager and Larceny Lad continue to arrive at their own crimes and take possession of the stolen goods before the henchman can depart…and then we see Jokerman becoming more infuriated that the henchman keep giving away the loot.

We then cut to GCPD headquarters where Jokerman arrives and accuses Commissioner Gordon and Chief O’Hara of being The Pillager and Larceny Lad. As Joker threatens the two with the Key to the City (which he has transformed into a gun), Joker reveals that he planned all of The Pillager crimes and had his men steal the loot for himself. He reveals that his scheme was to become a greater hero than the Dynamic Duo so he tricked his fellow villains so he could capture them. Chief O’Hara suddenly presses a button and the real Pillager and Larceny Lad come bursting through the window. Joker is confounded as he believed Gordon and O’Hara to be the criminal duo, but they take their masks off to reveal Batman and Robin. As Joker rushes at them, the Caped Crusaders knock out the Clown Prince with a double punch.

The issue ends with Joker back in prison and the true heroes of Gotham City back on the case.

This was definitely an interesting story where we saw Joker tricking the citizens of Gotham City into thinking he was a hero…but I still find it hard to believe that Batman and Robin would ever give up their crusade to “retire.” One could argue that they were only subduing the Joker into thinking they had gone, but I still can’t fathom a world where Batman would give up…for any reason. I did like the art style used in this issue, I think it was a step up from last chapter when Joker was simply taking Batman’s items and changing the color…now we have a completely unique costume and vehicle for Jokerman, all of which I liked the design of.

I felt that this story was a little predictable; from the Joker pretending to be a hero and secretly sabotaging the other villains and staging crimes that he was “conveniently” late for, all the way to Batman and Robin dressing up as The Pillager and Larceny Lad. The dialogue in this story was on par with other chapters and still made me laugh a few times…but I think that the story could have used some work.

Overall this was a middle of the road story for me; hopefully the next one will have a bit more dynamic to it…and maybe showcase some of the other villains that we’ve only seen once.