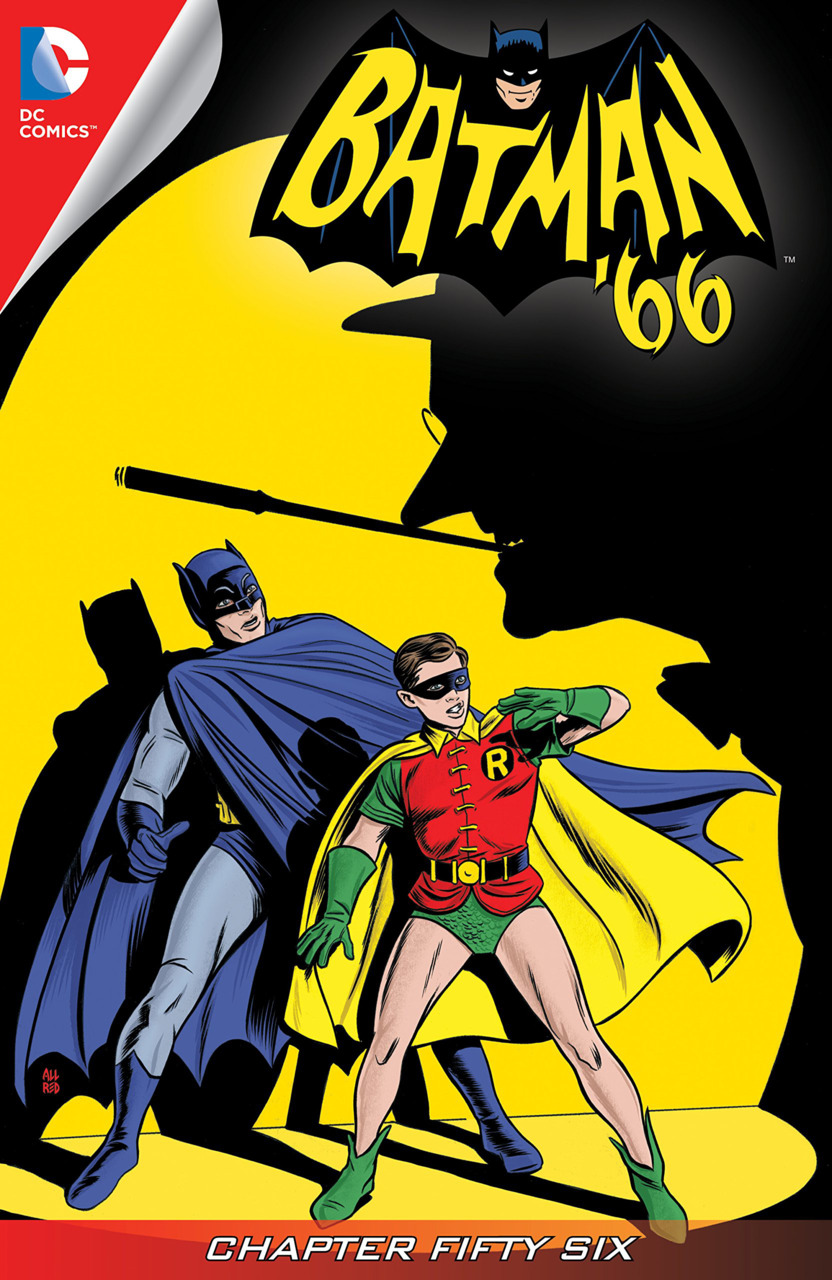 This chapter opens with a newspaper and reporter talking about a robbery that the dastardly Penguin has managed to get away with. As the batsignal shines into the night, we cut to the Gotham Museum loading docking where several shadows approach the door. As Penguin ignites his umbrella to sever the lock on the door, he and his henchmen step into the museum in search of an umbrella commissioned by none other than millionaire Bruce Wayne – jewels inlaid on the handle, gold ribs and imported silk. However, a quick swish of a cape signals that the dynamic duo has arrived and both swing down to confront the pudgy Penguin. The Caped Crusaders reveal that they planted the false story about the umbrella in order to lure Penguin into a trap. While battling against the heroes, Penguin sets the building ablaze with his own umbrella and manages to escape. Batman then halts Robin who is set to pursue, he notes that they must save the artifacts in the museum as it is more important. Quickly they both use their capes to catch some fire and then wave them above the overhead sprinklers…they successfully manage to turn the water on and save the building.

Sometime later, Penguin is with his henchmen and shouts “I’ve done it!” He explains that since the dynamic duo managed to catch him with his love of umbrellas, he has decided to pull crimes that have nothing to do with his gimmick…but setup to turn the tables on Batman and Robin.

At a later time, we cut to the Five Blessings Chinese restaurant where we see the Penguin holding up the host at the door. Across town, Batman receives a call on the batphone and he quickly u-turns the batmobile to head towards the restaurant. As the two heroes rush into the building, Penguin unleashes a barrage of bullets from his umbrella causing the two to flip through the air…however the bullets manage to hit a large fish tank that explodes. As Penguin directs his goons to cut the overhead cabling, Batman realizes that the live wires falling into the water could electrocute everyone in the restaurant. With a quick toss of a batarang, Batman hits the circuit box and plunges the store into darkness. As Batman and Robin help the injured, Penguin manages to escape.

Later, the dynamic duo responds to another call at an animation studio. As the two wonder why Penguin’s crimes aren’t relating back to his love of birds or umbrellas, the two perform a bat-climb up the side of a building. They arrive to find the animators tied up and wearing penguin masks, while the company payroll is missing.

We then cut to Batman and Robin crashing through a skylight into an apartment of an unknown man. Batman explains that the man, Professor Corstairs, has been supplying the Penguin with information regarding…bats. As Robin reveals that he is puzzled, Batman explains that the “Five Blessings” in Chinese is represented by five bats. After being tricked into a false umbrella theft, Penguin seems to be taking his revenge by planning crimes revolved around bats. After a bit of encouragement, the professor reveals Penguin’s location and Batman knocks him out with bat-gas just to be safe. However, as the two race off a hand can be seen reaching towards a phone.

As the chapter closes, Batman and Robin arrive at Penguin’s location but are ensnared within a giant clear cube. As a hole opens near the top, Penguin’s voice can be heard over a loud speaker as he reveals that dozens of vampire bats are streaming inside.

I really liked this issue. I have begun to notice that some chapters (despite their quality) better reflect the source material of the ’66 TV show…case in point is this particular story. While I have been recently re-watching the entire Adam West/Burt Ward series, it has become more prevalent that these ’66 stories could very easily have been episodes on the show. This chapter for instance has Penguin getting ensnared with his classic love of umbrellas and then taking his revenge out on the dynamic duo.

I thought it was really clever to have Penguin turn the tables on Batman and Robin by basing his crimes around bats rather than his traditional schemes…it was also neat to see several uses of the Penguin’s umbrellas (machine gun, flamethrower, blowtorch, gas emitter). I also liked how Robin was portrayed in this story…often on the show, Robin would show how young he is by making statements of “gosh Batman, I still have a lot to learn,” (Or something else along those lines) and we got to see that happen within this story when Robin calls bats dirty and he is corrected by Batman.

Overall this was a good story that is very reminiscent of the former show and a definite read if you enjoy the Penguin as the villain. Also, I loved that this chapter ended on a classic cliff-hanger just like the 2 part episodes of the first two seasons.