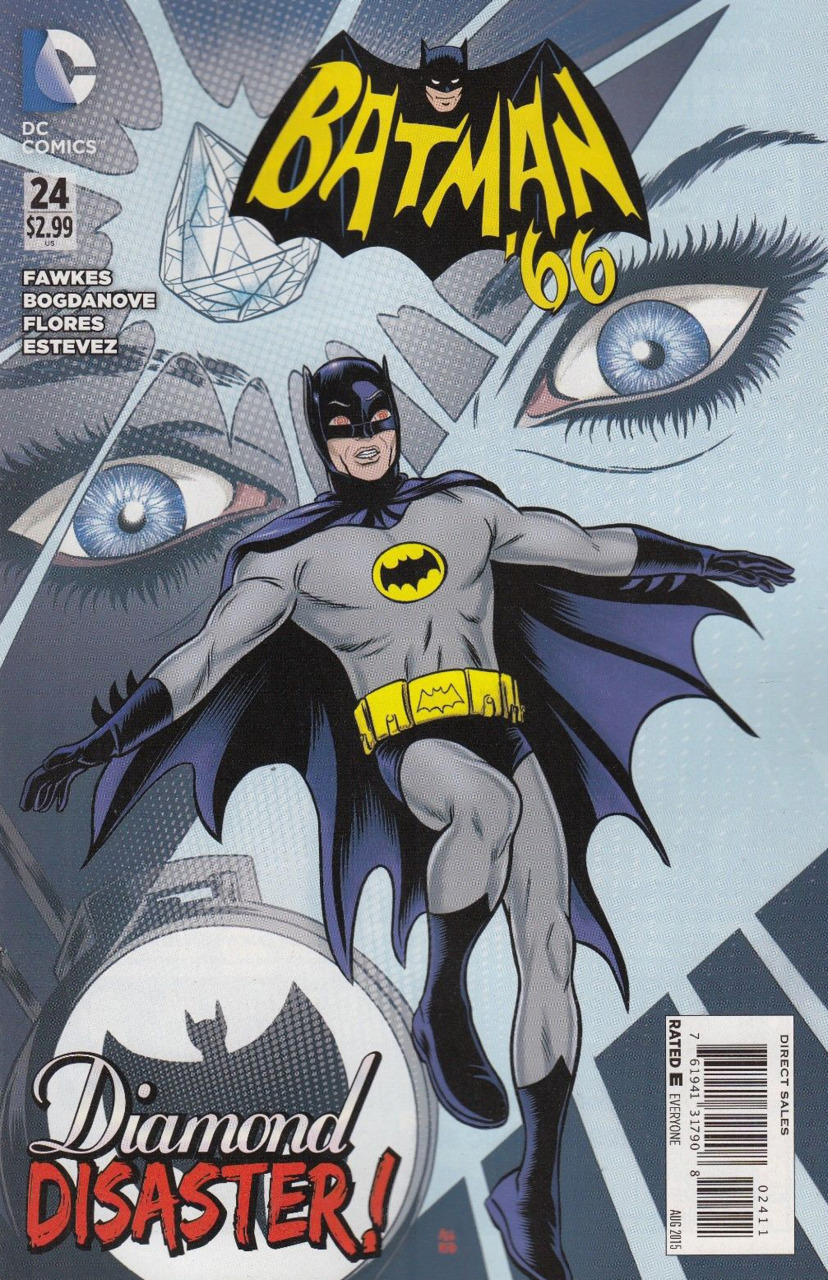 Gotham’s Millionaires are inexplicably withdrawing all of their money from the First National Bank. Commissioner Gordon and Chief O’Hara decide to call in Batman and Robin to look into the situation. Since Bruce and Dick have to go to Gotham Museum’s Diamond Gala which will be full of millionaires they decide to use the party to their benefit. At the Gala they see the wealthy attendees throwing all of their jewelery into a pile surrounded by turbaned guards. They are apparently being hypnotized by a huge diamond attached to the ceiling. Dick is mesmerized by the diamond but luckily Bruce shields his eyes and avoids the spell.

Out comes Marsha, Queen of Diamonds, who is apparently the mastermind behind the hypnotic spell. Bruce dashes off to the Batmobile to do a quick change. Batman beats up some of Marsha’s guards but can’t catch her before she zips away in her speedster. Batman gets Dick into his Robin costume and takes off in pursuit of Marsha. However, the still hypnotized Robin has removed the Batmobile’s diamond studded breaks to give to Marsha so the Batmobile is unable to stop. The Dynamic Duo narrowly avoid many in-town mishaps before they crash into a construction site. Batman saves Robin and takes him back to the Batcave for some experimental deprogramming.

After trying a variety of deprogramming techniques Batman settles on the correct interference pattern to break the spell (Eight Thousand Millicycles seems to work if you happen to get in a jam like this at home).

Since the Batmobile is immobile the Caped Crusaders have to hop a bus to the Commissioner’s house. When they arrive they find Gordon mesmerized and behind the wheel of his car. They hitch a ride and he leads them to Marsha’s hideout, the Sparkling Star Hotel.

When they arrive and confront Marsha and her guards she lights up the hypnotic diamond and the Dynamic Duo seem to be under her spell. They approach her and Batman moves in for a kiss. However, our heroes have synchronized their blinking to avoid the spell. Robin disables her machine and the two fight Marsha’s guards and defeat them.

Marsha is led off to jail but vows to return to cause more havoc. Batman says that the only thing harder than a diamond is the even-handed resolve of decent citizens.

As a man of a certain age, my first exposure to Batman was the Adam West series. I loved the show as a kid and one of my prize possessions was the March 1966 issue of TV Guide that featured the Dynamic Duo. After several house moves the magazine disintegrated and was finally thrown away but several years later I was able to get my hands on a reprint.

So, Batman ’66 hits the bulls-eye in my nostalgia wheel-house. I can’t help but be as hypnotized by this series as Gotham’s millionaires are by Marsha’s giant diamond. For this reason I just love the whole idea of this comic and this issue works perfectly in that regard. The over the top do-goodery of our heroes, from the safe driving quips to the paeans to justice, is exactly what I fell in love with as a child.

The story in this issue is simple and direct. There is nothing fancy here. The art is reminiscent of the old show, complete with red Batphones, Batpoles and the movable Shakespeare head. It is also nice to see Chief O’Hara who is missing from modern adaptations.

The art is interesting too. It is usually done in a straightforward old time-y comic style and sometimes veers off into the art of the hippie dippy 60s.

Although this is a totally solid series I recognize that it lacks the gravitas and complex characters and storytelling that are the hallmarks of truly great modern comics. For that reason I am not giving it top marks. But as a tongue in cheek joyride through my childhood I can heartily recommend this book.