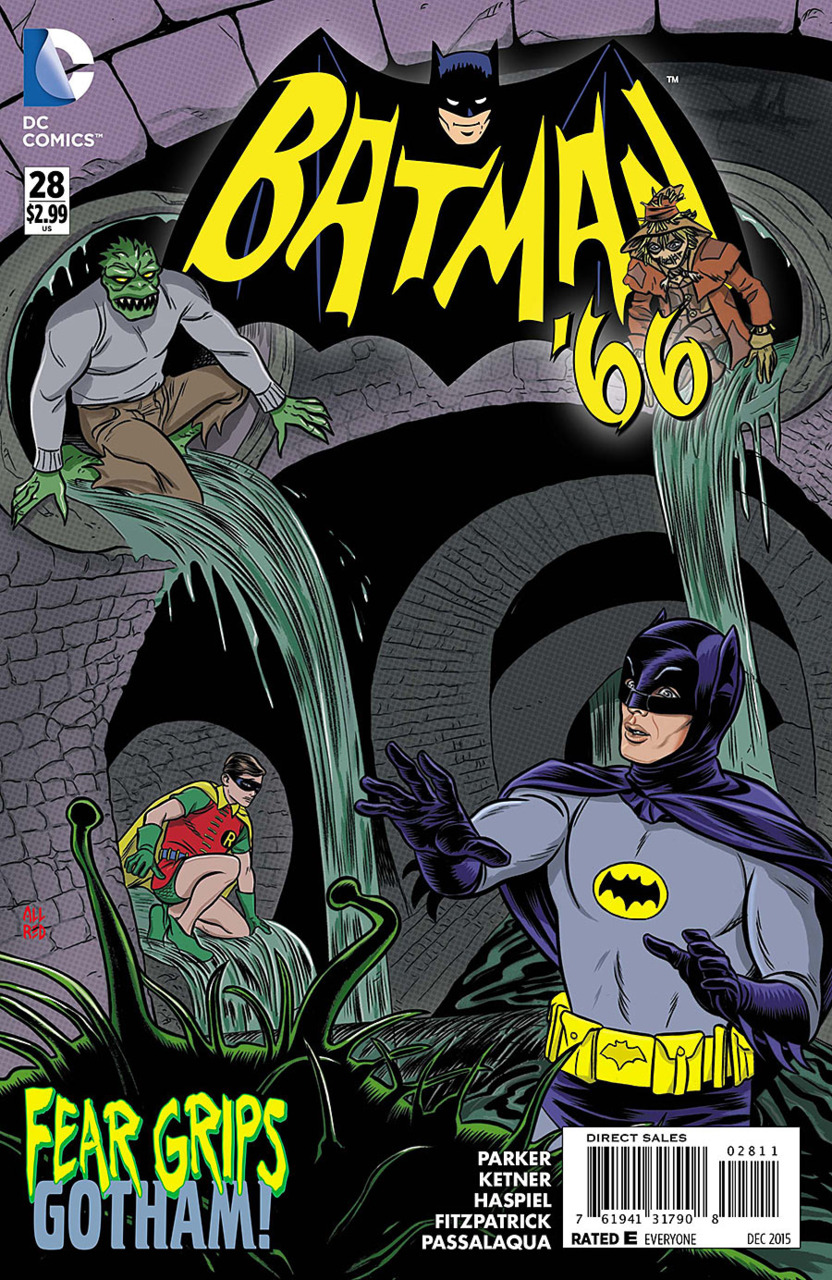 The Caped Crusaders try to protect Gotham from the evil schemes of Scarecrow and Killer Croc in this issue of Batman ’66 #28.

Our first story opens with Batman and Robin arriving at a Bank Robbery. There is a strange gas coming out of the bank and the policemen that are on the scene are terrified. The Caped Crusaders enter the bank but are immediately sprayed with the gas by Scarecrow.

Our heroes are overtaken by the things that they fear the most. Robin has a vision of Batman telling him that he isn’t good enough to be his sidekick. Batman has a vision of himself as a child (in full Bat gear) going down a dark alleyway with his parents.

Batman snaps out of the hallucination and shakes Robin out of it as well. There is a note on the wall warning that in 3 days all of Gotham will fear the Scarecrow. B&R make for the Batcave where they analyze the gas that had been absorbed by their clothes. They locate the source of the ingredients, a small town in Appalachia.

In the rural town of Jitter Holler the Dynamic Duo meet a farmer and his wife who invite them in for dinner. They get a belly full of grits and sweet tea and hear tales about the Crane Boarding House next door. Apparently a border left a baby for the Cranes to raise. The child was named Jonny and was tormented by the Cranes biological child Zeke. Zeke used to terrify Jonny with a scarecrow. When he was old enough, Jonny got a scholarship and left Jitter Holler for school.

The strange coincidence is that Jon had recently returned to the old Boarding house, picked up a mysterious item from the shed, and immediately left. Soon after, Zeke came to them terrified of invisible spiders and needed to be hospitalized.

Batman thanks the couple for their story and asks for another plate of grits.

The next night in Gotham Scarecrow is causing the locals to face their worst fears. But suddenly his gas fizzles and a scarecrow emerges from the mist. Scarecrow collapses and faints in fear as he sees Zeke stand as well.

With Jonny in a daze Batman and Robin remove their Scarecrow and Zeke disguises and send poor Jonny to Arkham. It turns out that there is a strange toxin in the water of Jitter Holler that Jon used to create his fear gas. Luckily Batman realized that eating a full heapin’ helpin’ of local grits would make them immune to Scarecrow’s gas. End of part 1.

Our second story begins at a parked armored car. The guards are attacked by a mysterious green creature with with pointed teeth and sharp nails. The guards fire on the assailant to no avail.

Commissioner Gordon and Chief O’Hara call Batman and Robin and explain that the money was stolen by something that sounds like a dinosaur. This sounds familiar to Batman as he is working on the case of one of King Tut’s minions who was transformed by some bad Egyptian ale.

The Caped Crusaders go to the henchman’s girlfriend’s apartment where they are saucily invited in. The lady says that she hasn’t seen her beau but Batman notices that the furniture as been arranged for a much taller person. Suddenly they are attacked by a creature that calls himself Killer Croc. Croc is very strong but luckily Batman has some anti-crocodile spray left over from a previous case. Croc is hurt but escapes through a window.

The Dynamic Duo follow Croc’s trail of destruction to an open manhole. They go down into the sewers where they find and fight Croc. They are physically no match for the repulsive reptilian but through teamwork they manage to get Croc bat-cuffed to a pillar. Great work chum. The end.

Again, Batman ’66 delivers pretty much what you would expect. The stories are solid if unadventurous. I thought the Scarecrow story was better than usual for Batman ’66 however it is offset by the borderline offensive characterizations of the rural folk. They are just the kind of Green Acres style rubes you would expect from 1966 media. The only think keeping it from being cringe inducing is that all of the characters are caricatures, much like the original show. It is the paint by numbers effort we have come to expect from this book.

In terms of the art, I personally prefer it when Batman and Robin look more like Adam West and Burt Ward. For a book that trades so heavily on nostalgia they might as well go all the way. This isn’t the case here however.

Since the top rating we give here is five batarangs I’ll throw this one right down the middle. If you like this book you will probably enjoy this issue. If not, there isn’t anything here to sell you on it.