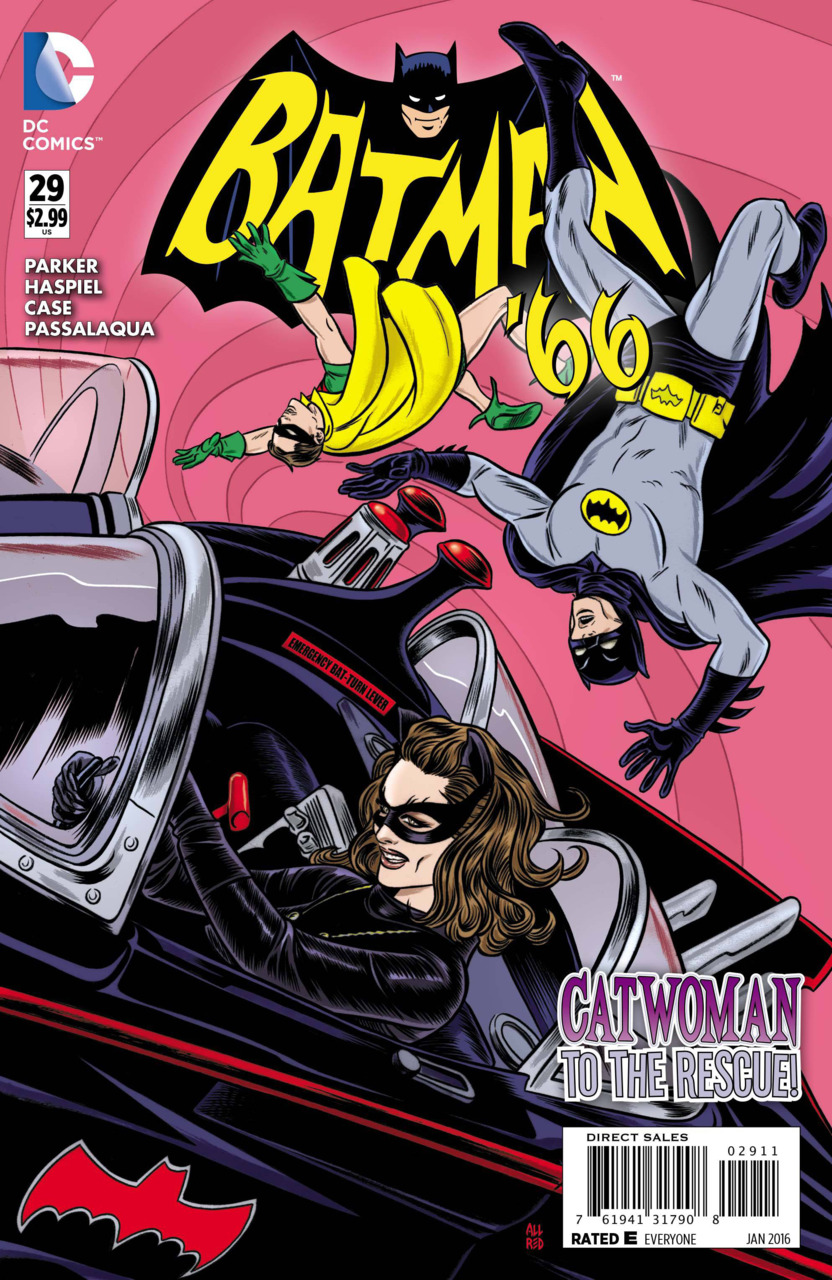 The Dynamic Duo have a run-in with Ma Parker and her gang and also cross paths with Catwoman as they tussle with the baddies of Gotham in Batman ’66 #29.

The issue opens with Ma Parker’s gang laying down a barrage of bullets from their Tommy guns onto the Batmobile. We flashback to earlier in the day where Batman and Robin are at the Gotham Women’s Prison where a riot has broken out. Batman asks to see Ma Parker’s cell and it appears that Ma and her daughter have tunneled out of the prison in all the confusion.

Batman decides to head to the men’s prison but is too late to stop Ma from releasing released her sons as well as Killer Moth, Killer Croc, Solomon Grundy and other prisoners. The Dynamic Duo have a car chase with Ma and her gang when they shoot at the Batmobile. Ma is angry that the Batmobile is bulletproof and leaps from her car onto the hood of Batman’s. Sadly her car crashes into the river. Both Batman and Ma leap into the water to save Ma’s family.

The prison wardens don’t want Ma and her family back in their prison. Batman deliver Ma and her kids to Arkham Asylum where everyone is much happier.

Several escaped prisoners, including Catwoman are still on the run. Robin and Batgirl are out on the town rounding up the escaped convicts when they are captured by Killer Moth, Killer Croc and Solomon Grundy. Killer Moth is going to use them for bait to trap Batman.

Meanwhile across town Catwoman has robbed a jeweled tiara from a kindly old lady when Batman catches up to her. A roof tile breaks and Catwoman plunges downwards. Batman swoops in and saves her from losing one of her nine lives. As Batman leads a cuffed Catwoman to the Batmoble en route to the police station two kids come up to the two and tell Batman about Robin and Batgirl’s capture.

Batman has to hurry away to save his allies without bringing Catwoman to the police so Catwoman slips the cuffs and decides to come with. Batman wonders if Catwoman has a good side after all. Catwoman suggests they go to the docks to find Killer Moth’s hideout.

Killer Moth has Robin and Batgirl tied head down above a tank of man eating sharks. Moth is going to broadcast the pair’s peril to attract Batman. Batman shows up early however and the bad guys go to fight him. While Batman distracts the evil doers Catwoman sneaks in and frees Robin and Batgirl. The four now fight Killer Moth and the others. As they see how effective Catwoman is as an ally Batman wonders if he might have feelings for her. While he wonders Killer Croc lays a devastating punch on him. Catwoman fools Grundy into punching Killer Crock out cold. Robin and Batgirl trap Killer Moth by shining a light in his eyes. Batman uses a crane to knock Grundy into the shark infested water.

With the bad guys knocked out or underwater Catwoman slips away. Robin and Batgirl think she is bad for doing so but Batman tells them not to be so quick to judge as she was there when they needed her. Hanging over the side of the ship Catwoman overhears much to her romantic delight. The end…

I enjoyed the Catwoman portion of this story the most. The writer, Jeff Parker, does a good job in building the relationship between her and Batman even in this ’66 world. Having her flirt with Batman to his distraction is a humanizing thing to happen. I am a big Selina fan so seeing the ’66 version of Catwoman flirting with Batman is very fun.

The art by Dean Haspiel and colors by Allen Passalaqua are a little more reminiscent of Adam West and the other cast members from the 1966 TV show than they were in past issues. This Lee Meriwether Catwoman looked particularly lovely and realistic.

It might sound silly but I think making the comic characters look like their live TV counterparts is an important part of making Batman ’66 work. Its whole reason for being is to appeal to the nostalgia for the show from people like me. Recent issues didn’t always do this well, this issue does. I still don’t think this is a great book for adults, but it sure would be a terrific introduction to the Batman character for a kid.