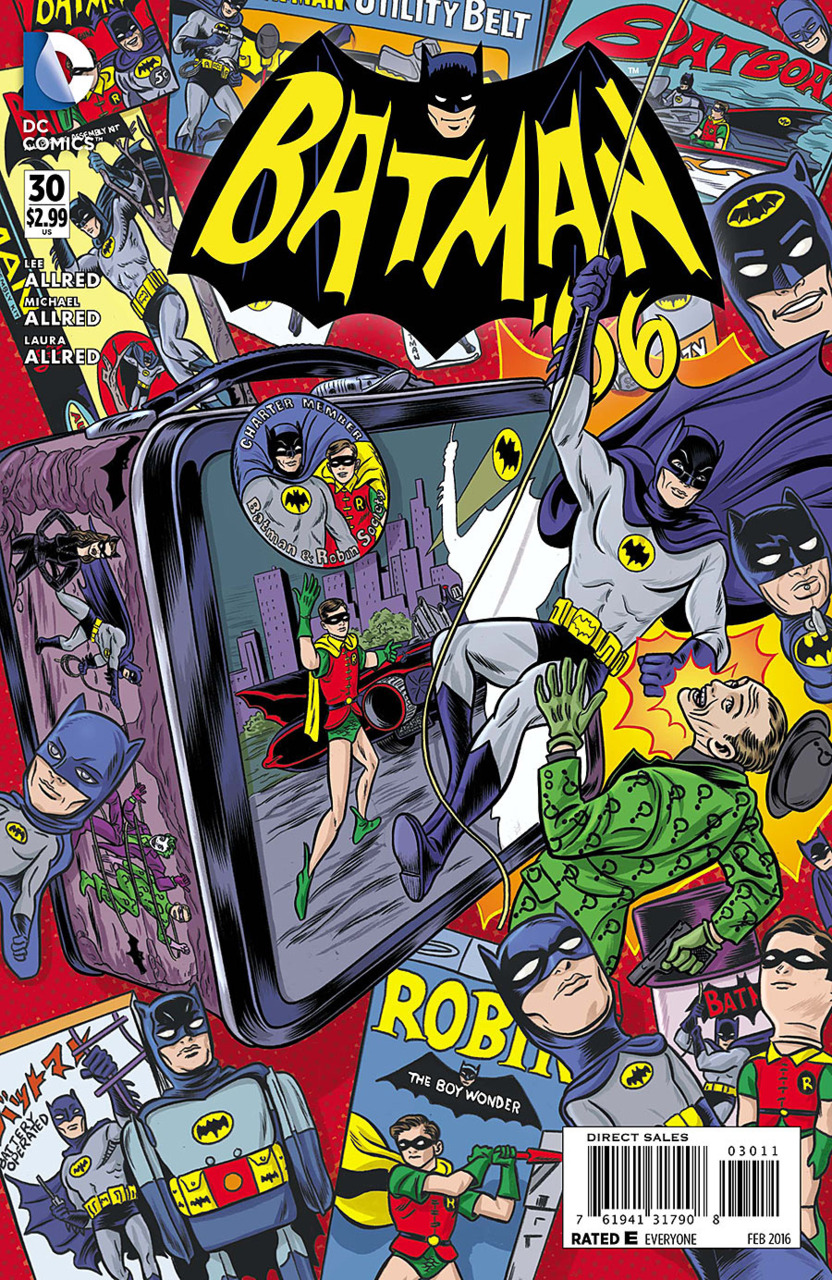 Batman and Robin face a Convention of Criminals that are trying to raise the skills of Gotham’s Ghastly Gangs in the final installment of Batman ’66 #30.

Gotham City’s criminals are nowhere to be found. Commissioner Gordon and Chief O’Hara are nervous that something big is afoot. But what?

Over in an abandoned movie studio Joker, Penguin and Catwoman (Lee Meriwether style) are running a Crime Convention with almost all of Gotham’s super criminals in attendance. They are giving workshops in how to be better criminals. The only criminal left out is Riddler who apparently has annoyed the evil trio so much with his silly riddles that they can’t stand to be around him and so poor old Riddler didn’t get an invitation.

Riddler also happens to be in Gotham State Penitentiary where he hears about the convention taking place without him. He decides to make the other criminals pay for not inviting him.

At home in Stately Wayne Manor Bruce and Dick are spending a quiet day with Aunt Harriet. Dick is bored by the lack of crime fighting but Bruce reminds him that a crime-free Gotham is their goal.

Alfred comes in with a message that gets our heroes into their tights and over to Commissioner Gorden’s office. Riddler has sent over a movie film reel with a couple of riddles that lead the Caped Crusaders to the movie studio the Crime Convention is happening at.

The Dynamic Duo climb the side of the building when the newsroom cast of the 50’s Superman TV show, sans Clark, poke their respective heads out of a window asking if B&R need help. They refuse but not without Robin giving them some sage journalism advice. Batman and Robin reach the roof of the building and find a door that has a disabled alarm they can enter through.

A security camera has captured the Caped Crusaders entering the studio so the bad guys prepare a trap for them. When Batman and Robin enter the studio they come into a room that appears to be fully green for chroma keying backgrounds. They meet and punch their way through the gang of criminals. There are so many baddies however that they begin to weaken. The evil doers pile onto our heroes, pinning them to the ground. However, Batman presses a button on his utility belt calling the Batmobile which crashes through the building wall. The bad guys are hit by the car causing them much consternation.

Riddler pops out to gloat about ruining the convention but Joker, Penguin and Catwoman all hit him for ruining their party. The three try to escape in a cloud of smoke but are stopped by the motorcycle riding Batgirl. She finishes off the rest of the criminals while the police and reporters come inside.

The three heroes can’t stay for any accolades, the Batsignal is in the sky calling them to save yet another day. The End

This is the last issue of Batman ’66 and the series finishes on a high note. Of course the Dynamic Duo is returning in the upcoming Batman ’66 Meets the Man From Uncle. However, the Allreds give the Caped Crusaders a terrific send off.

I have said before in my reviews that Batman ’66 succeeds best when it plays to nostalgia and we get a big serving of that here. There are references to the Batman movie, Aunt Harriet and the iconic Shakespeare head. We get the familiar TV Show trope of Batman and Robin climbing up the side of a building. Here we get a special treat when we see TV Superman Editor Perry White poke his head out the window and give a hearty “Great Caesar’s Ghost” which will be very familiar to old time TV fans like myself. Even the art itself is made to remind us of the old show. In the pages where Batman and Robin are punching their way through the bad guys the art is pretty close to a copy of the opening credits of the TV Show. It is a very special sequence.

The art looks great and the drawings look very much like the TV actors, which has been one of my pet peeves of some previous issues. Of particular note are Joker, Penguin, Catwoman and Riddler. There is also a few great panels of Alfred that look terrific and of course it is always fun to see Aunt Harriet.

I have been critical of this book in the past and have at times given it weak ratings when it has missed the nostalgia mark. The storyline here is par for the course but I am going to give it a very good ranking for its well thought out references to 50’s and 60’s television and the terrific artwork.