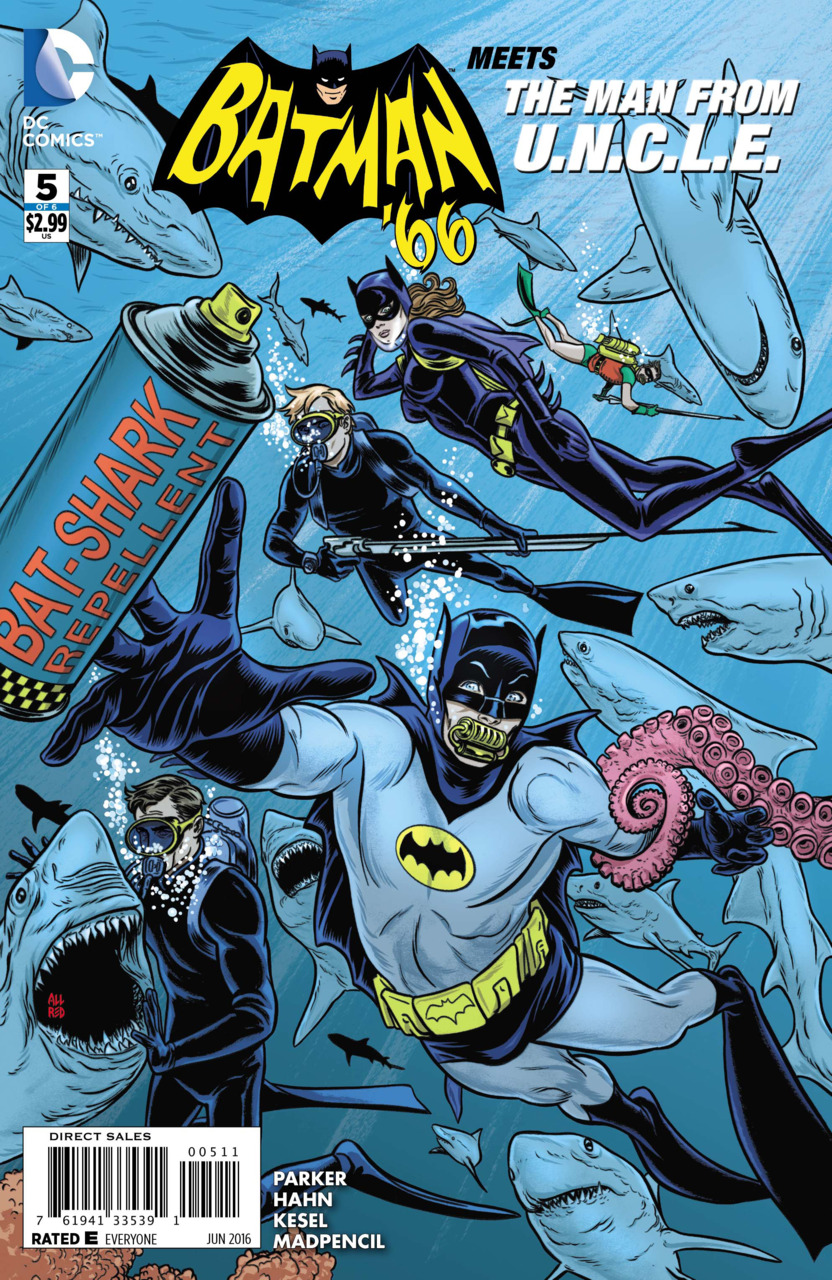 The Caped Crusaders are imprisoned in Dr. Hugo Strange’s undersea lair as the villain tries to bring the titular heroes and Batgirl to join his evil crew in Batman ’66 Meets the Man from U.N.C.L.E. #5.

Eight arms to spoil you…

Dr. Hugo Strange has outed himself as the criminal mastermind, Corvid. Strange, had profiled the villains while he was their psychiatrist at Arkham Asylum. The rogues are somewhat put out by being tricked by their mild mannered Doctor. But Strange has relied upon the fact that since they now have done a few jobs for him they will be amenable to his leadership which seems to be the case.

Strange takes Batman, Robin, Batgirl and the Men from UNCLE to an underwater garden created by Poison Ivy. He explains that he plans on using our heroes, who are trusted everywhere, to take over the world. They resist but Strange uses a gas developed by Scarecrow and emitted by Ivy’s plants to put the do-gooders into a receptive hypnotic state.

While in that state he analyzes each of the good guys to determine their rationale for having become the heroes they are. He embeds the idea in their minds to join his crusade of world domination, to use each of their strengths and positions to assist him. He suggests that he, Dr. Hugo Strange, is behind that which drives each of them to do-goodery.

After our heroes wake they tell Strange that they will not do as he wishes. This is not a surprise to Hugo who understands that it will take many such treatments to be fully effective. Strange has them escorted to their rooms. On the way they overtake the guard and try to escape the underwater hideout.

However, they are stopped by a gigantic purple octopus who grabs them all in its tentacles. Strange comes on the video monitor to tell them that there is no escaping his lair. He also mentions that they have stumbled upon his pet octopus during feeding time. Oh dear. Until next month…

You may think that the Batman ’66 line is a cheesy nostalgia play that isn’t a worthy title alongside the other Bat-books. That is understandable if you were following the old Batman ’66 title. B66MTMFU is a different animal however. While this book still trades on the old TV tropes some of us oldsters grew up with and loved, the storyline and events are every bit as interesting and compelling as some of the other Bat-books. Sure, this is definitely in PG territory and being attacked by a villainous octopus is very 1960’s. The story line and character development by writer Jeff Parker are every bit as interesting as anything out there. The scenes of the heroes being psychoanalyzed by Strange are interesting and all of the characters voices are strong. Moving the Batman ’66 line from episodic villain of the month issues to this miniseries format has really given the franchise room to tell good stories and it succeeds in its own quirky way.

Part of why this book might turn off some readers is the old fashioned quality to the art. But again, don’t underestimate the work by penciller David Hahn, inker Karl Kesel and colorist Madpencil. Sure, the overall look is nostalgic, but there are some wonderful pages that play with and rise above the base style. One such panel is when Strange is monologue about his plans. He is in the foreground as 60’s era images appear in orange tones behind him. Also the pages where the good guys are being psychoanalyzed by Strange are abstract and effective. There is also a technique the art team uses where the lines are double drawn with the repeated lines in a different color than the black lines of the main drawing. The technique is expressive and only used in certain dramatic situations. If you know the name of this art style please let everyone know in the comments.

I don’t like the dark doom and gloom look of many comics today and I am in the Batman ’66 target audience/generation so take that into consideration if you are using my review to decide whether to purchase this book. The Batman ’66 line isn’t for everyone, and the old B’66 book was definitely hit and miss. This Man from UNCLE story is a very good read though and the quality has been very even throughout the run.