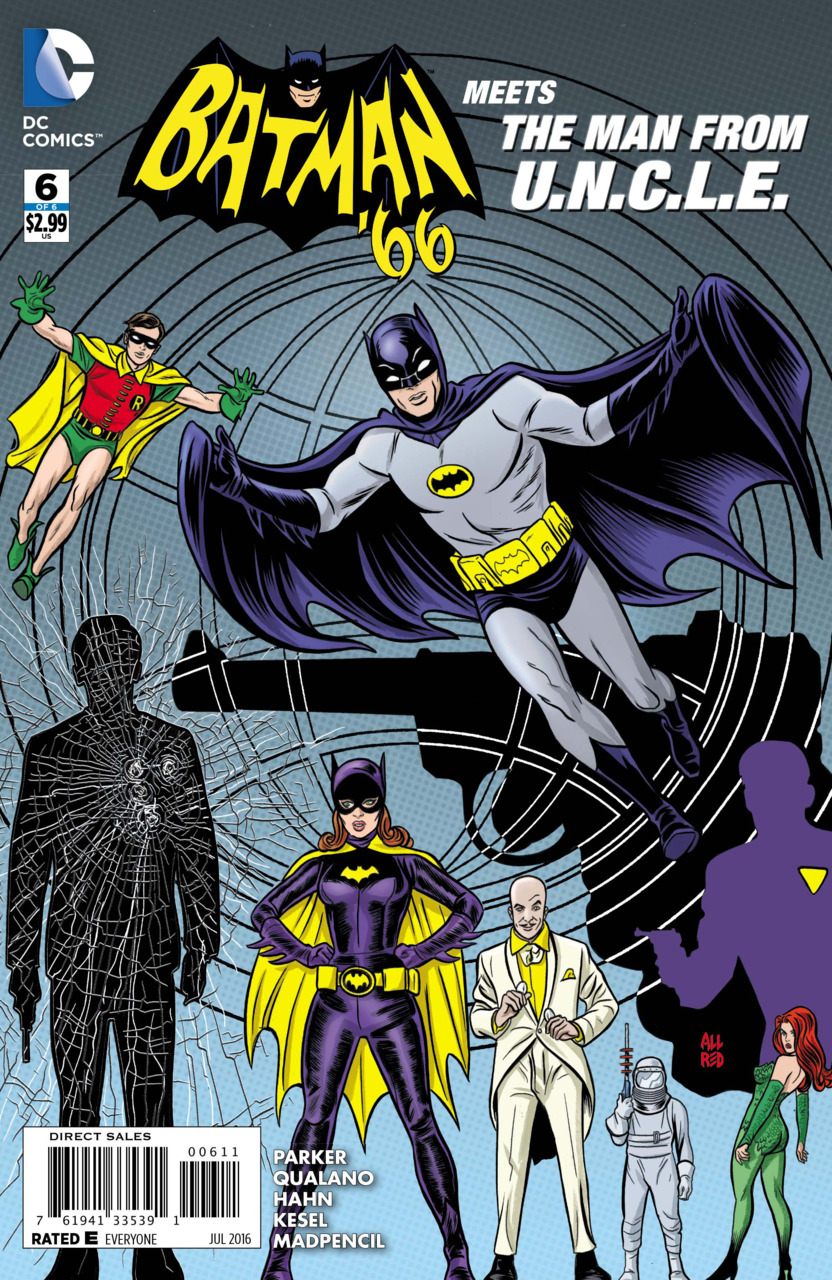 The Dynamic Duo, Batgirl and the Men from UNCLE try to escape from Dr. Hugo Strange’s undersea lair before they are brainwashed into joining THRUSH in Batman ’66 Meets the Man from U.N.C.L.E. #6.

When we last saw our heroes they were entangled in the arms of Hugo Strange’s gigantic purple pet octopus. Since Strange is looking to recruit the Caped Crusaders, Batgirl and the men from UNCLE he sends Mr. Freeze to put the great octopod on ice.

Dr. Strange continues his brainwashing on the good guys. The Rogue’s Gallery he has collected notice progress in their conditioning. The baddies look forward to the day that the Bat and UNCLE work for them. However, Batman hints that Strange promised Team Bats would be the superiors. Batman plays a tape of a conversation he had with Strange which proves this and the bad guys realize that Strange has been conning them all along. The villains and good guys form an alliance against their devious captor.

The newly formed team members use their individual powers to gain control of the underwater base. Siren seduces henchmen with her song, Sandman puts some of the guards to sleep, and just as Strange is using his brainwash machine to coax Batman’s secret identity, Ivy uses plants to trap the evil Doctor.

The Men from UNCLE punch and disarm some guards and Solo suggests to Batman that they use the Bat-sub’s atomic batteries in a bomb to destroy the base. The ever-humane Batman rejects that plan. They decide instead to make their way to the sub dock. The team of villains and heroes make their way to the sub base but just as they are about to get into Strange’s sub Mr. Freeze builds an ice wall to keep the heroes out. The baddies escape in the sub.

Batman realizes that since they are underwater the ice wall will contain a large amount of salt which will destabilize the wall. They push it over and get into the Bat Sub. Kuryakin expected the bad guys to double cross them so he released the giant purple octopus which captured the villains’ vehicle.

Aboard a Monaco navel battleship the evil doers, including Hugo Strange, are taken into custody. Waverly suggests to Robin and Batgirl that they become secret agents and Batman bids a fond farewell to the Men From U.N.C.L.E. THE END

Writer Jeff Parker delivers a solid ending to this surprisingly good mini. The cheese factor is cranked up at the expense of plot and real characterizations however as all of the villain’s idiosyncratic tropes are played for maximum value and is at times Eggcruciating. There are too many villains that need their few seconds to make any of them more than just cardboard cutouts.

Few will remember, anymore, the personalities of Solo and Kuryakin from their old show and nothing in this series will change that. The characters are drawn like Robert Vaughn and David McCallum but no life shines through. This is a missed opportunity and one that should be remedied in future Batman ’66 titles. However, the story is solid and the tale is well told.

Artists Pasquale Qualano, David Hahn and Karl Kesel and colorist Madpencil create a satisfying nostalgic journey into the past. Particularly good are the brainwashing panels full of psychedelic swirls and Daliesque scenery. There are some panels that seem clumsy but overall the work is solid.

If you are considering getting caught up on Batman ’66 Meets the Man from UNCLE I would recommend it. Even though #6 isn’t the best issue in the series, overall it is a satisfying story from beginning to end with enough twists and turns to keep things moving. The winks at the audience are part of the Batman ’66 charm and if you in any way enjoy a look back into the simpler Bat-world of yesteryear this mini will serve you well. Don’t expect anything approaching realism or a plot that will stand up to a shower-long analysis.