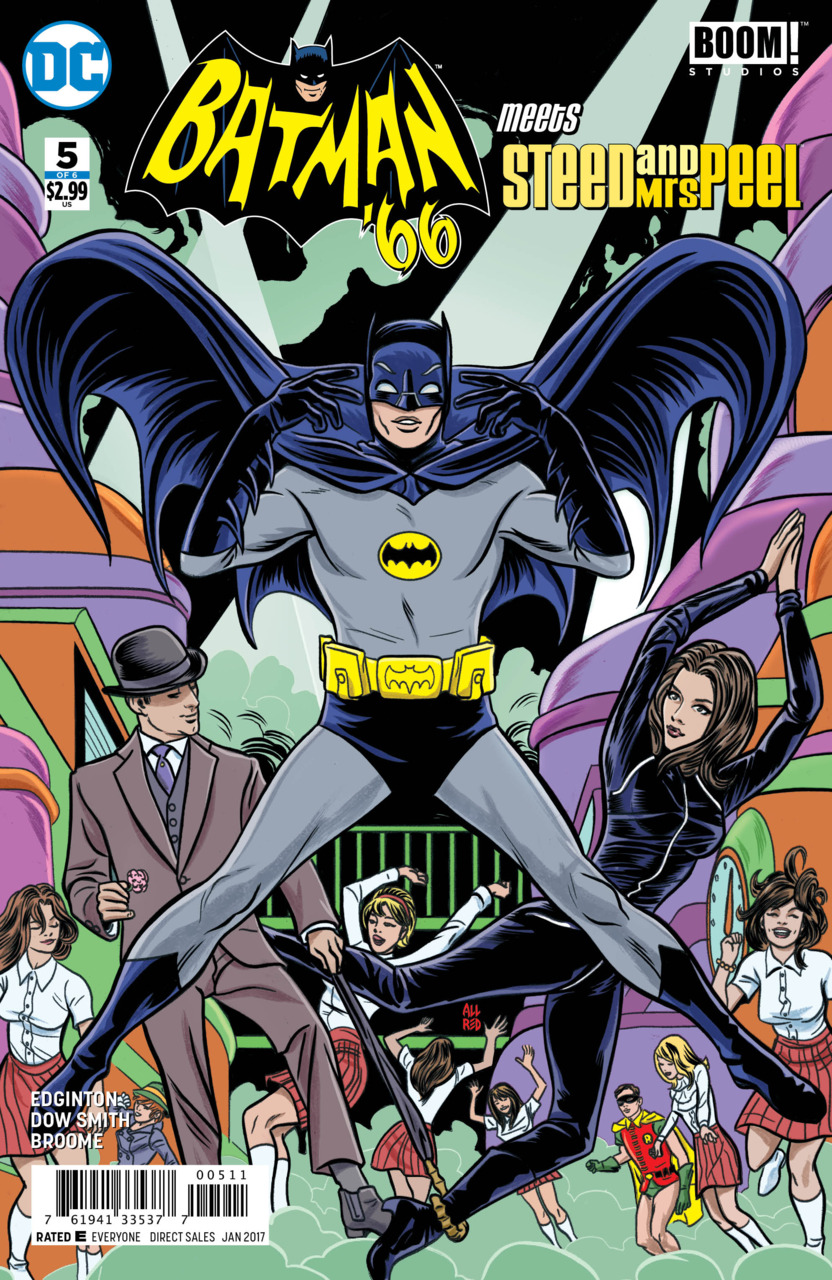 When we last saw our heroes they were in the Tower of London being attacked by Cybernauts dressed in Beefeater outfits. Freeze and Michaela Gough controlled the robots. Mrs. Peel is inspired by Robin to use the coolant that kept the fake diamond on ice to incapacitate the robots. A series of punches take care of the chilled Cybernauts.

The team makes their way to Ffogg’s mansion where the Michaela and her evil crew are hiding. Robin tells Batman he is sorry Michaela turns out to be a crook as he knows that Bruce cared for her. The quintet make their way into Ffogg Hall and split up. Batman and Mrs. Peel meet the gaseous British Villain. A trap door opens in the floor and they both plummet down. Luckily Batman sticks a Batarang into the wall and hangs on to keep them from falling into a vat of boiling pea soup.

Robin is with Steed and run into Freeze. They fall into a similar trap door and Steed uses his umbrella handle to catch the floor which keeps them from dropping into Liquid Nitrogen.

Batman has Mrs. Peel throw a grenade that is in his belt into the soup. It forms a fire retardant solid surface on the boiling concoction. Batman then throws Mrs. Peel up into the room they fell from. She beats up Ffogg and helps Batman out of the pit.

In the other room, Robin tricks Freeze into coming to the edge of the hole in the floor and lassos him with a rope. Just as the two climb out of the pit Freeze shoots them with a cold ray. Steed uses his umbrella to absorb the icy blast and Robin knocks Freeze out with one punch. Biff!

Our heroes bring the captured bad guys together and try to contact the police to come and get the villains. However, Michaela has jammed all the police channels and is watching them over a closed circuit TV. She tells them that while they have defeated her pawns they haven’t defeated her yet. Ffogg and Freeze are shocked that she has called them her pawns.

Iron bars come down trapping them in the room and four co-eds from Lord Ffogg’s Criminal Academy enter the makeshift prison. While they appear to be normal teenaged girls they are in fact Cybernauts. Until next month…

Writer Ian Edginton delivers another solid story in the Batman ’66 vein. The tale is simple and effectively plotted. There are not ‘wow’ moments but more of a straightforward tale of the Dynamic Duo. While Steed and Mrs. Peel contribute their fighting skills and some lighthearted banter, the stars here are the Caped Crusaders. The plot moves well enough though they are again split up into two different groups which both have similar adventures. We don’t see much relationship development between anyone but Batman and Robin, which is fine, but seems like a missed opportunity. Also, I am not sure if I am supposed to know who the female Cybernauts from Ffogg’s Criminal Academy are, but I don’t and that makes the cliffhanger seem random.

Last month I overlooked some of the artistic issues and gave issue #4 a fair rating. This month however between the bad art and the confusing cliffhanger ending I am going to be a bit more critical. I don’t have high hopes for the next and final installment of this mini.