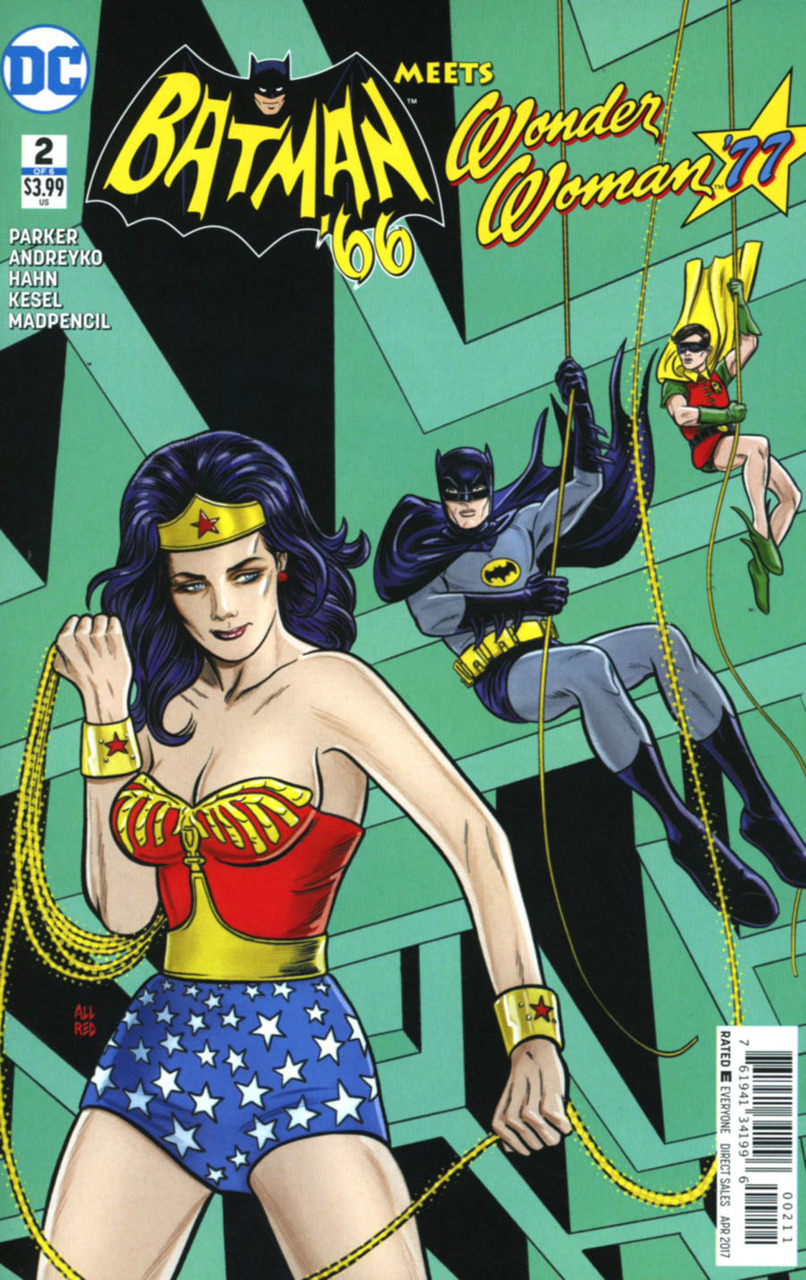 The mystery of the books “The Lost World of the Ancients” and the danger its theft has resulted in is revealed. The Caped Crusaders will need to save the day in Batman 66 Meets Wonder Woman 77 #2.

Ra’s al Ghul and young Bruce Wayne are in the hedge maze of stately Wayne Manor. Ra’s is demanding Bruce tell him where he has hidden the books “The Lost World of the Ancients” (2 vols). Bruce head-bonks him and runs off to try to escape with the books. In his haste he drops one of the volumes and Ra’s finds it.

Ra’s and his Assassins find Wonder Woman and Talia. Ra’s takes Talia away and orders his men to attack WW. That doesn’t go so well for them particularly since Steve Trevor shoots and wounds one of her attackers. Wonder Woman tries to use her lasso to get the truth of Ra’s motives out of the man, but he disintegrates before her eyes. Wonder Woman flies off in search of Bruce.

Ra’s drives off with Talia and the book in a waiting car. Talia pines for Bruce in the back seat.

Bruce is running through the woods and is grabbed by a Nazi soldier. He bites his finger and book-smacks him to escape his clutches. As Bruce runs away he falls into a well. Out of the darkness flies a colony of bats. His cries are heard by the Nazi Soldier and his creepy commanding officer. They find the well.

Back at the party, another Nazi soldier has taken Mrs. Wayne hostage. He almost shoots Thomas and Etta but Wonder Woman deflects the shots with her bracelets. They make short work of the poor schlub. Some bats fly into stately Wayne Manor and they tell Wonder Woman, who speaks many dialects of bat, that Bruce is stuck in the well. She flies off to his rescue.

Meanwhile, down in the well, Bruce is being attacked by the super creepy Nazi. Wonder Woman finds him and deflects his shots with her bracelets. He says that he wants the books because they describe many supernatural items. As he backs away from Wonder Woman he trips and falls down a deep pit to his death. They realize that the book reveals the location of Paradise Island where Wonder Woman is from. She insists that the book be hidden so her home isn’t discovered.

Back in the modern day (assuming the modern day is in 1966, which I personally remember) Batman realizes that he must fly to Paradise Island to warn Wonder Woman that the book has been stolen and the location of her home may have been revealed to the book thief. Until next month…

The importance of the mysterious book robbery gets explained in writers Marc Andreyko and Jeff Parker’s tale. Seeing Bruce and Talia as kids is certainly fun and it is fascinating to see Talia’s immediate attraction to young Bruce. It is also satisfying seeing how Wonder Woman sees the steel in Bruce’s character and predicts big things are in store from him.

The real hero in this issue is, of course, Wonder Woman. She is flying around saving the day wherever necessary. It is terrific seeing her in the B66 universe where she fits in seamlessly.

Pencils are by David Hahn, Inks by Karl Kesel, and colors are by Madpencil. The lines are the fun old fashioned style we have come to expect in successful Batman ’66 titles. The evil Nazi officer looks particularly sinister. Madpencil’s colors however are particularly good this issue. The contrast between the strong purples and greens as well as the variety of violets in this issue are gorgeous. Colorful without being fussy, very nice.

I am a big fan of the Batman ’66 franchise and integrating Wonder Woman ’77 is a wonderful idea that is working well. I am looking forward to seeing the ‘modern day’ Diana and am really enjoying this plot. Who can argue with killing Nazis? From here on we will probably be fighting the al Ghul family instead of Nazis. I hope the pace keeps up with the remaining four issues devoted to fighting members of the League of Assassins. I do love seeing young Talia and look forward to seeing how she and Bruce interact as adults.

I recommend this title for fans of the old style Batman books, however it does have a $3.99 price tag which may deter some buyers.