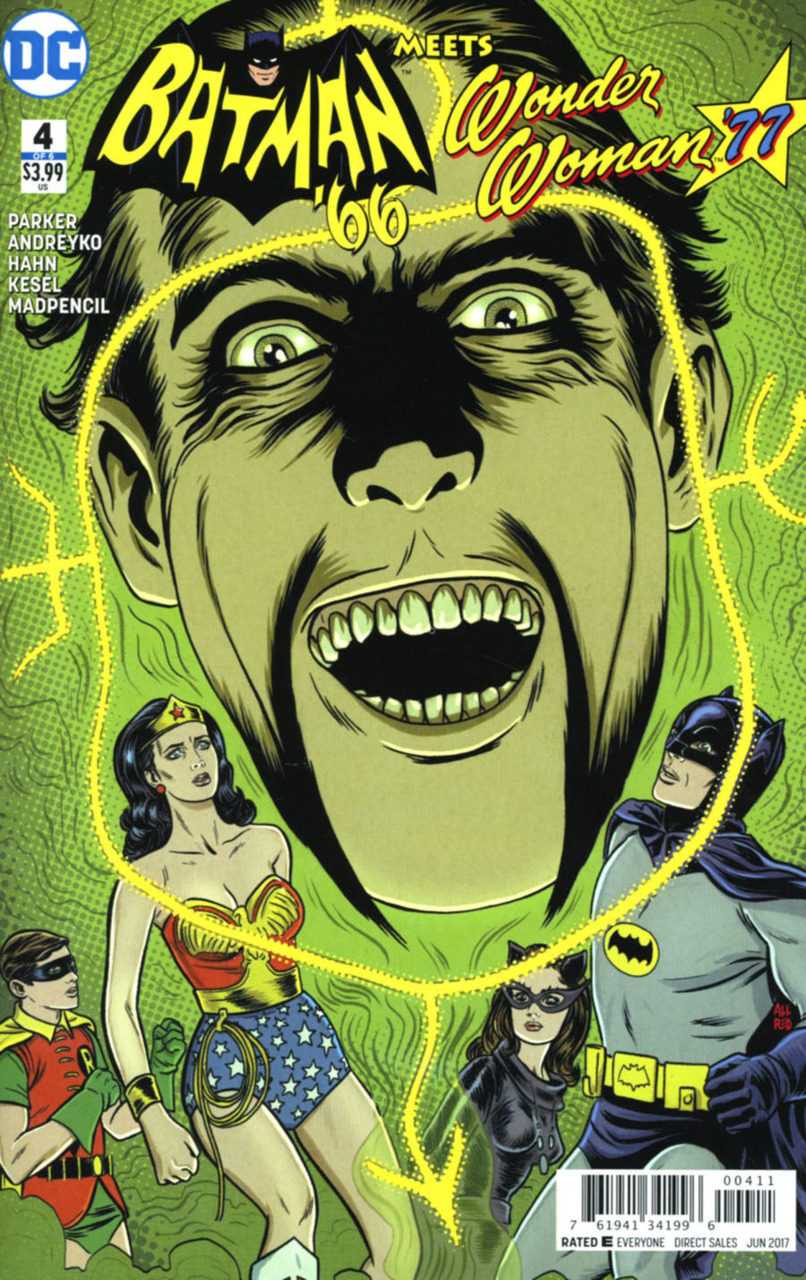 Ra’s al Ghul has arisen from the Lazarus Pit and wants revenge on his enemies: the Dynamic Duo, Wonder Woman and Catwoman. Can our heroes survive the wrath of the Demon’s Head? Find out in Batman ’66 Meets Wonder Woman ’77 # 4.

The Story (Spoilers): Ra’s Al Ghul rises from the Lazarus Pit, and is young again! Batman and Catwoman attack him from the back of a Griffin while Wonder Woman flies through the air with Robin in tow as they try to stop the Demon’s Head. Ra’s Shadow Warriors shoot arrows at the Griffin grounding Bats and Selina. The four face off against Ra’s men who create more warriors from their shadows. Our heroes are able to get the advantage but Batman faces off against Ra’s al Ghul in a saber fight.

Talia sees them fighting but can’t stand to see Bruce Wayne, her childhood crush, killed. She sets off some sleeping gas grenades that knock out the good guys. Ra’s brings our heroes to the beach and casts a spell that causes the four to be swallowed by the sand.

The sand begins to suck them under. Suddenly, a young Amazon warrior arrives on horseback and barely misses Ra’s with an arrow. While her father is busy fighting the new arrival, Talia digs out Batman from the sand pit. Wonder Woman also flies out of the trap and together they free their comrades.

WW lands a mighty punch on the Demon’s Head’s noggin and the two siblings greet each other. Ra’s and Talia take advantage of the break in the action to make for a waiting boat in the water. Diana lassos Talia but Ra’s makes it to the boat and decides to leave his daughter to his enemies.

Batman shoots an arrow onto the roof of the boat and causes it to burst into flames. Ra’s jumps into the water to escape the blaze. Amazon frog-women arrive to find Ra’s in the treacherous waters.

Batman and Wonder Woman take a private moment. Bruce uncowls and tells the Amazon Princess that he is Bruce Wayne and was so inspired by her bravery when he was a boy that he became the man his is today.

The group retires to a celebratory feast. The team has not been able to find al Ghul’s body but Batman knows that he has escaped alive. Batman tells Catwoman that she has to come back with him to Gotham to pay for her crimes. However, she has newly been granted asylum on Paradise Island provided she behaves herself. Batman and Robin board the Batplane and head back home.  Until next time…

Break Down: The plot of Ra’s finding a Lazarus Pit on Paradise Island, rejuvenating, and leaving is pretty simple, but it successfully brings Batman into the world of Paradise Island. Writers Marc Andreyko and Jeff Parker give us a story where Bruce gets to tell Wonder Woman how much she has inspired him, which is heartwarming. There is a lot of charm used in the storytelling as it has been in this whole Wonder Woman series.

The pencils are by David Hahn, inks by Karl Kesel, colors are by MadPencil, letters by Wes Abbott. The style evokes past comic art eras as is typical of the Batman ’66 series.  The drawings loosely depict the actors from the TV shows, and the story is simply and effectively told. The colors of the pages are always well balanced. The colors shift throughout the book from the sandy sinkhole to the purples of the shoreline, which keeps things moving.

My Take: This Batman ’66 Meets Wonder Woman ’77 is a good idea that has been well executed. The main action plot with Ra’s has led us from a book theft in Gotham into an all-out battle with Ra’s al Ghul . It has logically sustained itself over a few issues now.

However, it is the side plots that are the most fun in this series. Having Wonder Woman save Bruce as a child and get to tell her how it affected him as an adult gives me more feels than I expected from the Batman ’66 franchise.

Batman’s belief in and love for Catwoman and their fraught relationship is one of my favorite parts of the Batman Universe. I like what they did here with their interplay. Like the Frog and the Scorpion, Bruce’s nature is to help Selina and Selina’s nature is to betray him. Even so, you know he will try again. Classic Bruce, we love him.

Finally, Talia loves Bruce. She always has. She is in a pickle, and it is engaging.

I have been rating this series well and I am going to continue to. Though, I wish Ra’s wasn’t such a jerk to leave Talia behind.