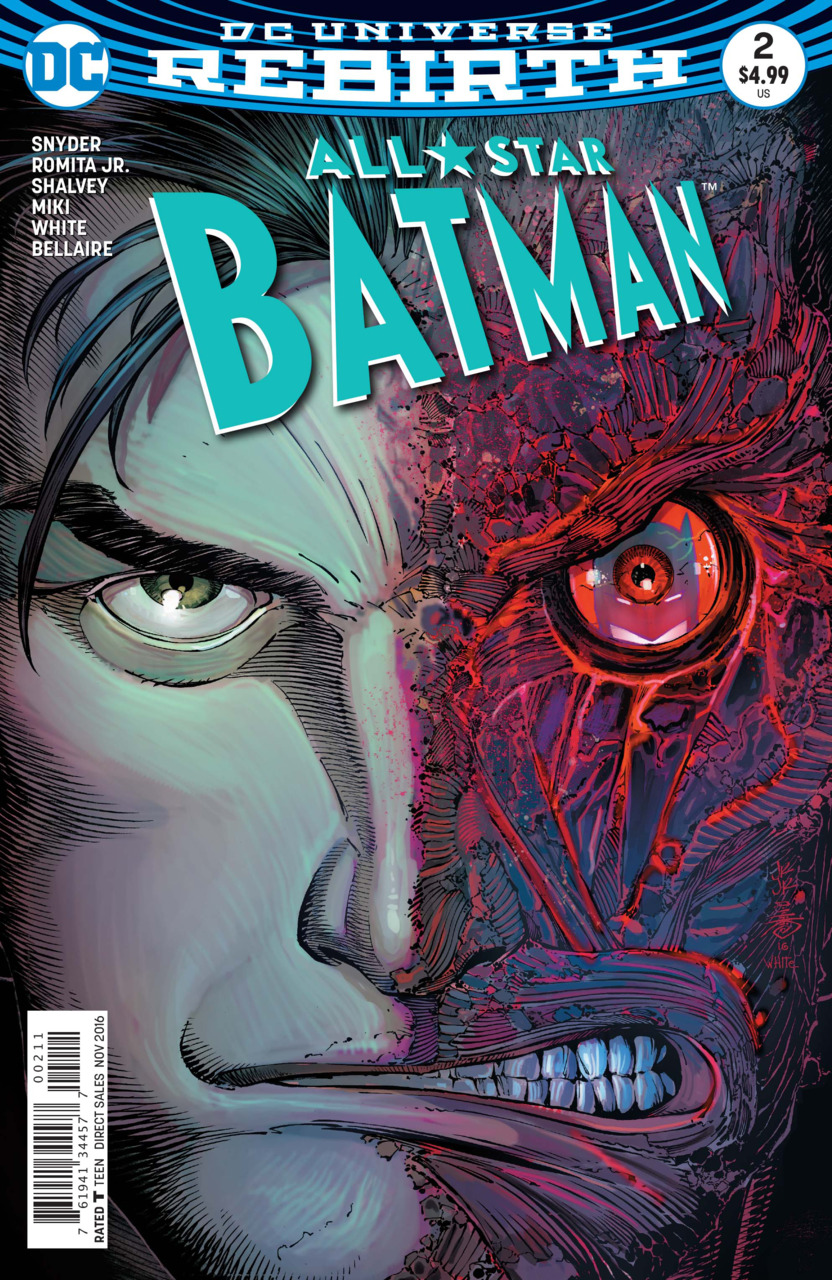 Note: Thanks to Ed on the Comics Podcast for the shout-out! It’s pretty awesome to hear your name mentioned on a podcast you’ve been listening to since you started listening to podcasts. I’ll be doing the same in the synopsis of this issue – and probably future issues – where I will tell you what happens in chronological order.

Synopsis: Years ago, Harvey is standing on the beach watching the sun set as Bruce approaches and congratulates Harvey (he seems to have just been elected as D.A.). Bruce hands him his coin, telling him it always comes back.

Twenty hours ago, Penguin, Black Mask, and Great White are meeting with the most stereotypical Russian man you can think of. Thing is, he used to work for the Soviet Union before it’s collapse. Afterward, the U.S. Government hired him to kill for them. Gotham’s underground pays him in Vodka, and asks him to kill Batman. He agrees, as long as he can do it as messy as he wants.

Meanwhile… Duke and Alfred are discussing the change in Harvey. Alfred explains that the changes happen and tends to last for several months. When Harvey is Harvey, he works with Bruce, trying to get a grip on his duality. Last time he sent Bruce a chemical compound. After looking it over, Duke realizes that “IT’S A TRAP!”, and rides off after them.

Now, Bruce has chained Harvey to the roof of a train while he fights off Killer Croc. Croc beats him up with a tree, allowing enough time for Trixie (I loved the inclusion of this inside joke from Suicide Squad) a.k.a. King Shark to break free and join. Another giant villain named Amygdala (whom I have no clue who that is) gives Batman a good beat-down, and then holds Batman up to be squished by the tunnel they are about to go through. However, Batman’s bat-ears double as knives, and he uses them to stab Amygdala’s arms, releasing his grip. He shoots some Shark Repellent at Trixie, and he jumps off, tanking Amygdala with him. Croc comes at Batman again with a tree, but Batman throws a Batarang/crowbar at him, which sticks in his skin, leaving the piece of lumber stuck onto his chest. After making a pun that goes over my head, the piece of lumber stuck to Waylon is wider than the tunnel is, causing him to get left behind.

As soon as they clear the tunnel, Batman tries to get Two-Face up, but he doesn’t cooperate very much. Suddenly, Batman is shot from behind with a poison dart from Cheshire, with Copperhead waiting for the him up ahead. Two-Face tells him that he made it farther than he expect– and then Batman grabs Two-Face, cuffs their hands together, detonates some explosives that he placed on their cart before the Croc fight, and the two tumble into the river below.

Further downstream, the two emerge from the river, and duke it out for a bit. Batman begins dragging Two-Face through the woods, as Two-Face tells him how he’s messing up. A red dot appears on Batman’s cowl, and a gunshot is heard. Moments later, a SWAT team is transporting Two-Face and a chained up Batman. The leader flips Harvey’s coin at him, and says “Pretty side he lives. Ugly side he dies.”… It lands on the “ugly” side, and laughs about Batman dying. Two-Face shoots the dude in the junk, and he falls out of the armored truck. Batman makes his move to escape by breaking two SWAT guys legs. At the same time, the Beast shows up, and shoots the driver of the truck, causing it to loose control and crash.

Two days later, Commissioner Gordon, Harvey Bullock, and the rest of the GCPD have arrived at Wayne Manor. They manage to get inside, and hold Alfred away as they break open the grandfather clock, and look inside.

Script: I really like what Snyder is doing with this story. It’s Batman out of his element, out in the open, without his friends and many of his more prominent gadgets out of the equation. The only problem I have is the constant chopping up of the story. I wonder if it’s so simple of a story that Snyder feels like he has to move things around to keep things interesting, but that’s not the case. Doing so actually just makes me a little confused. Otherwise, I’m still very interested as to where things are going.

Pencils: John Romita Jr. is still on top of his game on this series. I do think his art is a little better looking when the costume detail is a little more simplistic than the current version of the suit, but it still looks great overall. His storytelling is top notch, as he is one of the best in the business.

Inks, Colors, and Letters: Danny Miki inks this issue, and I feel like he did a bit better job than he did last issue. His line-work is a bit smoother. Dean White is still coloring, and it still looks gorgeous. When Batman looks this good in the daytime, you know there’s a great colorist on-board. Steve Wands letters this issue, and this guy always does solid work. I like how when Two-Face speaks, the word balloons are a touch rougher, causing me to think of Two-Face’s voice from the Animated Series. As a side note; That Declan Shalvey variant cover is one of the most beautiful covers I have ever seen.

Backup Story: Duke visits his parents, and by showing them family pictures, he tries to regain their sense of self. It doesn’t work, and Duke’s mother begins banging her head on the glass while telling her son that she’ll kill him. Duke and Batman make their way to the victim’s house from last issue. They start going through her belongings, trying to get more information, when suddenly Zsasz shows up, and cuts Duke.

This story was much more entertaining than last month’s, to me. It progressed the Color Wheel story, but also had a better detective element to the issue. Declan Shalvey’s art is really good, and Jordie Bellaire’s colors are able to stand out better because of some of the more muted moments.

Speculation – So I was along the same thought process as Duke. I was wondering if the change in Harvey was an effect from the self-inflicted gunshot wound to the head… That in that moment, Harvey was “killed” and it was now only Two-Face… However, Alfred seemed to shut that down pretty quickly… So I’m back at square one, not really sure what’s going on with Harvey. He seems to be Two-Face full time, with no hints at Harvey… With Two-Face being on of my favorite Batman villains, I’m eager to get answers… What do you guys think?