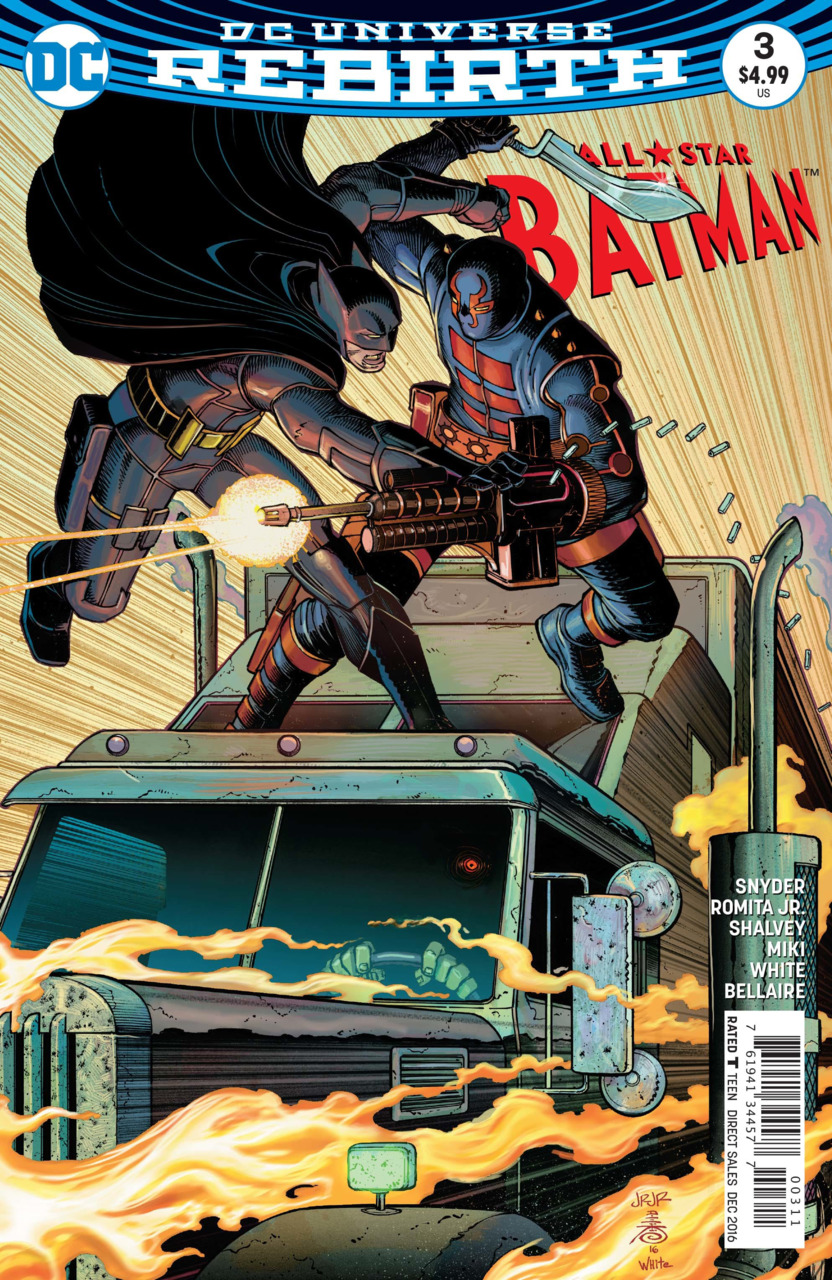 Synopsis: We start off years ago… Bruce’s parents haven’t been dead long, and Bruce has picked up a habit of practicing with guns and making plans. Alfred, not knowing what to do, sent him to a mental institution upstate owned by the Arkham family. It was there that he met a boy about the same age, and they grew close. The boy retaliated against his abusive father, killing him, and for that he was sent to this mental institution. The two became like brothers.

Currently, though, those two are bleeding out on the pavement together as an assassin is seconds away from butchering them with “his mother’s lucky machete” (if you know what I’m quoting, we can be friends). Bruce quickly moves out of the way, but having Harvey tied to his arm makes things difficult. A couple of Harvey’s guards come to, and try to save their boss, but Beast kills them both before Batman can react. He <snikt> activates his Bat Knuckles, and gruesomely cuts into Beast’s armpit from his bicep to his rib-cage. Beast doesn’t seem to notice, and gets a hold of Bruce, about to shoot him in the head with his machine-gun arm, when Harvey shoots his arm out first, disabling it. Beast throws some stars at him, but thankfully it misses his good side. Again, he readies the execution of the two, but is foiled again, when Duke plows him over with a family-sized station wagon while blasting some Death-Metal, which only makes me love Duke more. They load Harvey into the wagon, and Bruce tells him that they need to get Harvey to a safe house, where they can remove the throwing stars that are lodged in his face… They are severing three arteries. Bruce tells Duke to follow the road signs and they will reach one. Meanwhile, Beast comes to, and sees the Royal Flush Gang hovering over him on their giant playing card. They ask him which way they went, and Beast responds to them by throwing a bomb at them, taking them out for now.

At a local Kum&Go (which is weird to me, because that is a gas station chain in the are in which I live), Penguin, Black Mask, and Great White are filling up their limo, while discussing how they can’t afford to pay Beast the amount that Penguin promised to him. A couple of rednecks give Penguin a hard time, and he burns them alive right there at the station.

Bruce, Duke, and Harvey all arrive at Allnut Farms, where Harold Allnut removes the throwing stars, and manages to stop Harvey from bleeding out on the table. Harold is a family friend, who happens to be mute, so he speaks by signing to Bruce. He has built a lot of gear for Batman over the years. Bruce explains to Duke that he is taking Harvey back to that house where they met all those years ago.

Twenty minutes later, Bruce and Duke are on an air boat, about forty miles away from the safe house. Two-Face comes to, when the boat is attacked by some of Harvey’s goons (they look like half Court of Owls, half pirates). They capsize the boat, and pin both Bruce and Duke with some pikes. Two-Face makes Bruce question this whole trip, saying ‘maybe it isn’t Harvey who wants to get rid of me, but me who wants to get rid of him.’ He pops open a vile of acid, tells Bruce that he knows how he likes to make the world look the way he wants, pours the acid into his eyes, and asks him “what do you see now?”

Script: This is Snyder’s best script in the series so far. I highly doubt he reads my reviews, but it seems as though he somehow understood the only problem that I’ve had with this series — The pacing. The time lapses. The jumping around. I kept saying that the reason this series is so great, is because of it’s simplicity. But Snyder kept making it convoluted with the jumping back and forth in time. Then I thought about reading this series in the trade, and it made my head hurt… This issue was very straightforward. Snyder still managed a way to do his time jumps, but it was all in linear fashion and it actually made that loop in storytelling where the end of the comic ties in with the beginning. Hats off to Snyder for making a change a few issues into his story that improves his storytelling.

Pencils: John Romita Jr. kills it this issue, as usual. His storytelling is (again) one of the best in the business. The guy was born to do sequential art. His Batman looks a little chubby at times, but hey, the dude has been beaten to hell in just a few issues. If his body is swelling because of bruises and internal bleeding, I’ll buy that at this point. Romita knows how to draw someone who’s gotten the crap beat out of them.

Inks, Colors, and Letters: Danny Miki is doing great finishing up Romita’s work. I’m liking him more and more with each issue of this pairing, but as it stands, I still like Klaus better on Romita. Dean White is making a case for himself that he is one of the top colorists out there. It’s a work of art, as it looks like he’s painting these beautiful colors onto the page. There is a blend of multiple colors just in one given space, making his work pop in a way that screams that this is the work of Dean White. I haven’t seen anyone else do that type of work in coloring. Steve Wands letters this issue, and he nailed everything this issue. Nothing threw me off, and I especially loved the touch of Harold Allnut’s word balloons coming from his hands as he signed. It didn’t break up the pacing or the flow of the comic, but it added a nice touch to the character.

Backup Synopsis: We drop in on the Thomas family from a few years ago. Duke is trying to watch some TV, but is having some trouble with the screen. He asks his mom about the trial she was working on, and more particular, about if the killer was put away or not. She changes the subject, and fixes the TV.

In current time, Duke wakes and remembers the injury he received from Zsasz. Bruce tries to calm him, so that he can get some rest, and they talk about the case. A Rita Noles was mistaken for Diana Boone. Noles spilled wine on her blouse, and borrowed one from Boone. It seems Zsasz mistook her for Boone, kidnapped her, killed her, then after realizing the mistake, went after Boone. However, Duke suits up, and makes his way over to the hospital where Boone is, and analyzes the whole situation. He discovers that it was the plan all along. Boone did the switch on purpose. She is responsible for the death of Rita Noles. Diana Boone sees Duke from her window, and starts to run for it and Duke gives chase.

We cut back to the Thomas home from years ago. Duke is in bed, when his mom enters his room. She apologizes for snapping at him when he asked about the case. The truth is, the killer got off… they let him go free. She just didn’t want him to believe that there were monsters out there walking free.

Backup Analysis: At first these backup stories were dragging a bit for me, and were hard to follow. Finally though, they are beginning to pick up the pace, and are becoming more and more interesting, as well as make more sense. I’m still having trouble explaining them to you guys, but hopefully the point is getting across, and that it will get easier as the story becomes more clear. Right now, Duke is becoming a more interesting character all the time, and I would love it if Harper Row showed back up in the series. Snyder needs to develop her as well, and I’m worried that he’s forgotten about her… I’ll ask him on Twitter. Shalvey and Bellaire are killing it in these backups. I’d love to see them do a story of bat-characters in Gotham during the daytime… After all, Gotham is a bad place and needs twenty-four hour protection.