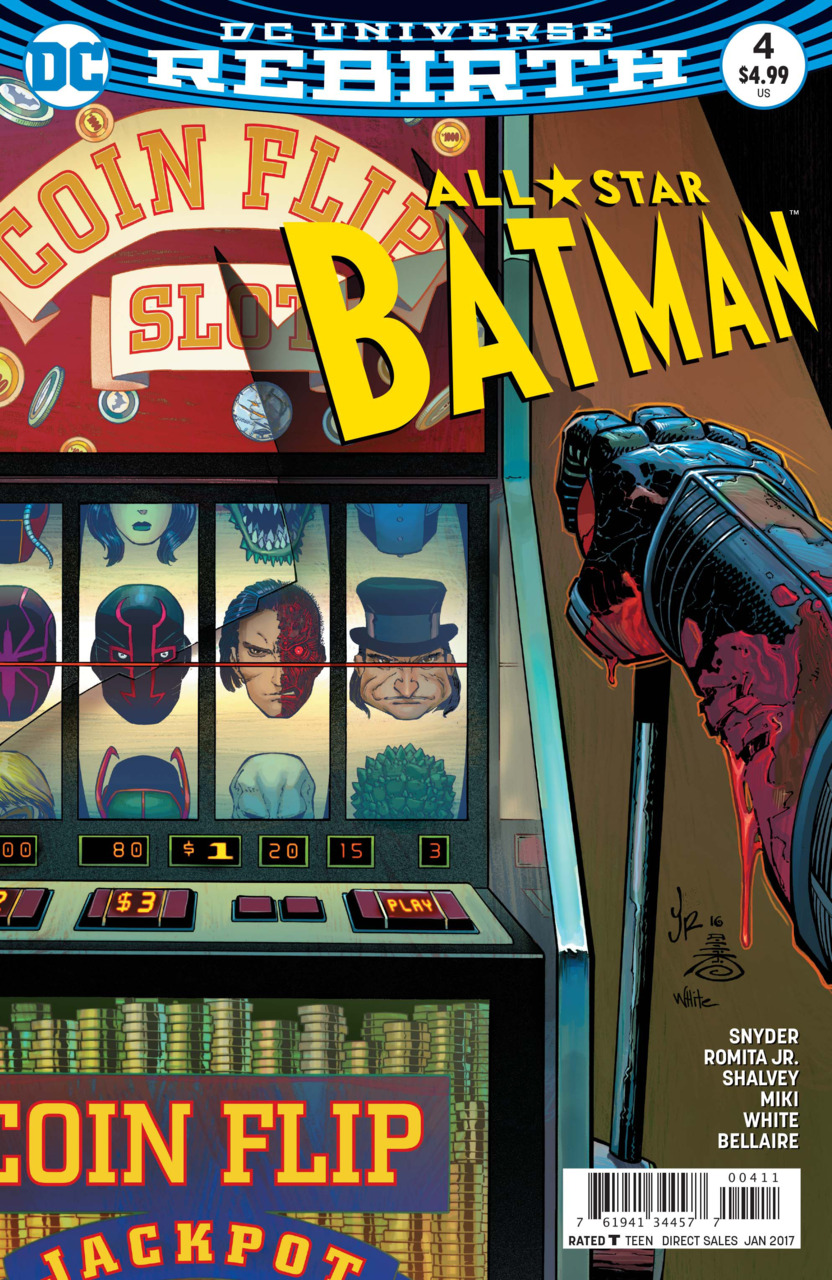 Synopsis: The story opens overlooking a house out in the country. We go inside to see the place is a wreck. Down in the basement, someone is crying out for help, saying that they’ve been down there for so long their nails have grown through their skin.

Meanwhile, at the same time, we cut over to the tunnels where we left off…with Harvey pouring acid into Bruce’s eyes. Batman breaks free with a new gadget — rocket powered tiles that project from the bat emblem on his chest. They hit Harvey and his Owl/Talon goons in the face, knocking them back. Bruce is nearly blind, only able to see silhouettes. Bruce projects a sonar from his suit, helping him see slightly better, and shoots out some rocket powered knuckles from his gloves, hitting them in the face… again.

Harvey has made his way over to a ladder and opens up the plumbing system, allowing water to flood the tunnels. With his Talon henchmen not needing to breathe (as they are already dead), this puts them at an advantage as Harvey escapes climbing out the of the tunnel. Bruce wants to disorient them by blasting Duke’s metal music through the speakers in Batman’s suit. Duke’s helmet is cracked, causing water to leak in. Batman blasts the music just in time. They make their way up the ladder, and knock Harvey out.

Bruce asks Duke to be his eyes and tell him what is nearby. Duke spots a small airport with crop-dusters and biplanes, and they take off in one of the planes. Bruce asks Duke for the coin, but Duke wants to know what Bruce is hiding about it. Bruce explains that before, Harvey’s dad would use a two-tailed coin. If it came up tails Harvey would be physically abused. After Harvey attacked his father, and was put in the institutional home, Harvey and Bruce made a pact with each other that Bruce would kill Harvey’s father and Harvey would kill Joe Chill. However, Harvey’s father sent him something. He melted down the coin and had them make a two-headed coin. It was a promise — “Never again. I’ll be better.” After this, Harvey backed out of their deal. Bruce was so angry, he threw the coin into the ocean. Now, Harvey has scarred the coin, choosing to see the ugly side of things. But Bruce… he won’t see things that way. He will look for the good. Duke hands Bruce the coin, and just before he can chuck the coin away, he’s kicked in the back of the head by KGBeast.

KGBeast has set up shop using the latitude/longitude 6.66 — the location of the Beast. It’s in an old paddle boat/casino called the Silver Dollar. He has Duke, Harvey, and Bruce all tied to roulette wheels — except Bruce has knives pinning him to his wheel. Harvey tells the gangs to cut him down, but Penguin announces to him that they are through with him. He’s pushed things too far. Harvey has just been posing as a villain. He plays a video of Harvey talking to Two-Face. Harvey had a backup plan in case Bruce didn’t get him to the home. He put a tracker in himself for the gangs. If he doesn’t give them back the codes to all their secrets, they will kill him.

Just then, the wall explodes as a barrage of bullets come flying through the casino. Two-Face and increased the range of the signal. Everyone is outside, ready to kill them..

Thoughts: Snyder continues his more coherent/linear plot thread, and it continues to work better than the convoluted mess that the first two issues were. I’m looking forward to seeing how all this wraps up next month, as well as the fallout from it. I’ve really enjoyed the story between Harvey and Bruce, and I hope that Snyder treats the other villains in a similar manner. My only complaint are all the ridiculous gadgets that they keep giving Bruce. It’s kinda been a cop-out for getting Bruce out of a sticky situation instead of him actually thinking his way out of it. Frank Miller recently commented on this, telling creators to ‘take the gadgets away from Batman.’ And honestly, that’s probably the smartest thing he’s had to say about the character in a long time.

Romita continues to kill it. Seeing Batman’s vision was a neat addition. I was afraid it was going to be a Daredevil rip off, but they found an original way to play with this. Dean White’s colors are amazingly striking. The personality he brings to this series is exactly what it needs. One of the things I’m interested in seeing is who will be coloring over Jock’s art in the coming issues. Steve Wands lettters here, and remains solid. There was just one instance where someone got hit in the panel, and at the bottom they had dialogue that was cut off in the end. This happens a lot, and I’m not sure who’s idea that is but I don’t like it. Either have the dialogue before, or don’t insert it at all.

Backup Synopsis: Duke gives chase to the woman who set up everything inside the hospital. Zsasz was supposed to forget about her, because of the switch she did… but he didn’t. And now he’s after her. As she tells this to Duke, Zsasz comes up from behind as a window cleaner, and kills her. Duke leaps after Zsasz, knocking him down and Batman knocks him out. Duke visits his parents as they sleep. He realizes (and shares with Bruce) that Joker attacks what he loves. And his serum makes his victims do the same. When his parents threaten to kill him, they are saying that they love him. Bruce is proud of him, and they begin the final set of his training with the wheel.

Backup Analysis: Declan Shalvey’s art continues to be rock solid. Jordie Bellaire’s colors are perfect for his style. These guys rocked this backup. And you even get to see Declan draw some tiny versions of the Bat-Family. Snyder’s script was on point this issue, and while I was assuming the woman died, I don’t know for sure. But that was plot and not the story, so I’m not distraught over not knowing for sure. I’m surprised they ended with one issue to spare, so I’m excited to see the finale.