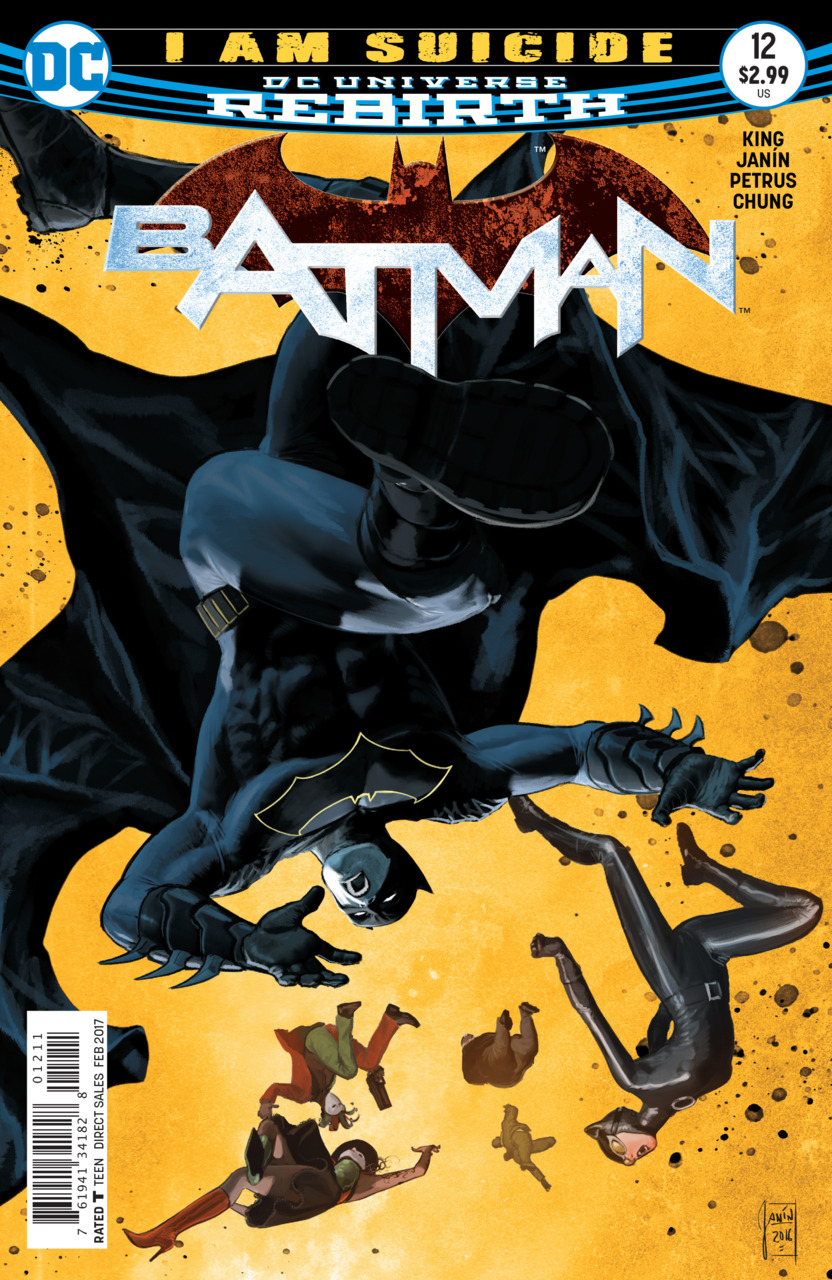 As “I Am Suicide” shambles forward, we get another mixed bag from Tom King.  This issue features another letter-based narration, only this one’s from Batman to Catwoman, and it seems to have set the world aflame.

First, the story in the here and now.  After Catwoman’s massive betrayal at the end of the previous issue, Batman fights his way to Bane’s throne room.  I had thought he was in Bane’s throne room at the end of last issue, but maybe he wasn’t.  It’s not overly clear to the reader.   Regardless, he’s on the warpath.  We don’t get anything in the way of interior narration, but the overall process doesn’t need it.  The silence makes everything more visceral.  We are presented with a very base element of Batman: ruthless determination unto the point of exhaustion.  While overall the story has had its flaws, there are moments like this that remind me why I love this character.  Anyway.  Bane knows what Batman wants now, and cordially invites him to come and get him.

The real meat of this story, and evidently this storyline as a whole, is found within the letter that serves as the narration.  It is scripted from Batman to Catwoman.  (Side note:  he pretty much confesses everything about his secret identity within those words, something that seems quite uncharacteristic.  Was this letter even sent?  Is it in the Batcave gathering dust?  Will we ever know?)

The core of the letter is the division between Bruce Wayne and Batman, and the reveal that Bruce has dabbled in self harm.  It is also revealed that the existence of Batman is a form of suicide for the Bruce Wayne identity.  The shedding of one life, the abandonment of normalcy.  All traditional trappings of the Batman mythos, with a new Tom King spin.  Moreover, throughout the pages he opines on the similarities between himself and Catwoman, as well as the pain and drive that draw them together.  It’s emotional and honest, and obviously a story Tom King really wants to tell us.  I’m hoping these are seeds he is planting for the long game.  Just like King’s first arc, “I Am Gotham,” there are elements of greatness on display, but a shaky overall narrative draws away the attention.

The star, as always, seems to be the artistic prowess of Mikel Janin.  This installment was an impressive undertaking, eschewing the traditional comic book formatting in favor of a series of sprawling double page spreads.  This is an action heavy installment, with Batman racing through each of the spreads being assailed by a small army of goons.  Thanks to the voice-over narration we never lose track of the forward progress as it guides us through the events without becoming overly intrusive.  The art aspect of this story is what has been consistently saving everything from overwhelming mediocrity.  The strength Janin pours into every page is worth the price of admission.

My issue with the story continues to be the disjointed feel between each installment.  The narrative doesn’t seem to flow as well as I would hope it would.  We’re nearing the end, so my final opinion will probably come down to how well they stick the landing.  In two weeks, I’m hoping they bring their A-game for the beginning of the end.  These characters deserve it.