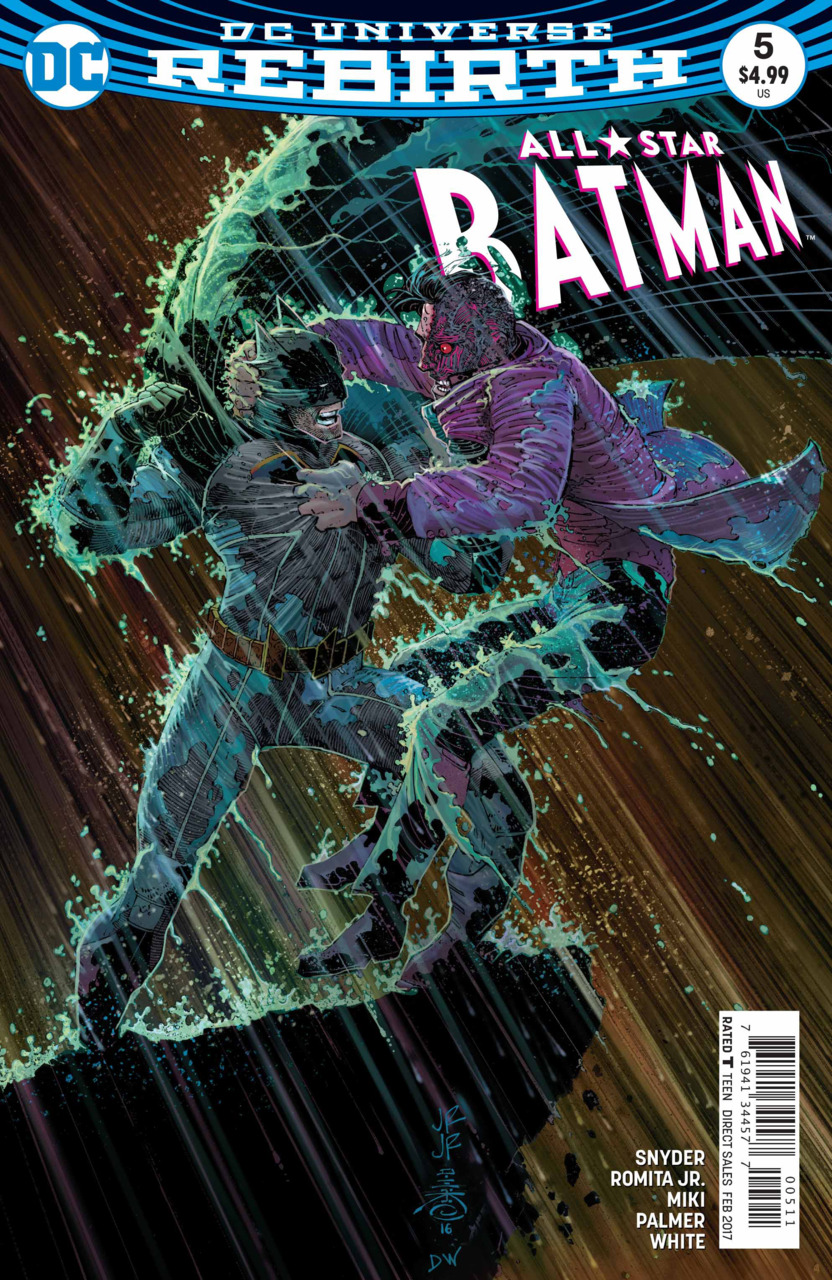 Synopsis: We pick up where we left off last issue with Batman, Duke, and Two-Face trying to escape from Penguin, Black Mask, and Great White — all the while in the crossfire of the angry mob of people Two-Face has stirred, as well as KGBeast. Penguin orders that he annihilate the crowd, and he seems excited to do so, but Batman throws an explosive that severs the tie/bridge to the casino/paddle-boat, sending them adrift. Our heroes approach the logo on the side of the boat, as it’s the most buoyant thing on the boat, but KGBeast is firing randomly while the boat heads towards a waterfall. The gang leaders try to steer the boat, but don’t really know how, so Batman throws his utility belt, and it explodes on the front of the boat, steering it into land. Batman and the crew go over the edge, but come up with a way to not die.

At the bottom of the falls, Tweedledee and Tweedledum are searching for their bodies, when they are both hit over the head with a cape full of rocks. Duke mentions how they must be following the tracker placed in Two-Face’s coin, but Batman mentions that he took care of the coin. No one will be following the from this point forward. Two-Face starts to mock them, but he begins slurring his speech… Harvey is coming back. They make their way to the Tweed’s business van, and start heading towards the house.

Meanwhile, back at the manor, the GCPD have broken through the grandfather clock. Alfred tries to stop them, but Gordon pulls him aside and tells him that whatever is down there, he needs to call HIM and have him fix it before they get down there. Alfred tells him that he can’t contact him at the moment, and Gordon has him shut in the other room.

Back at the home, our heroes have finally arrived. Duke stops, asks Bruce if this is what he really wants (his secret identity being exposed), and Bruce presses on. They make their way inside the home, and Bruce flashes back to when Harvey was leaving the home and going back to his family — Bruce apologizing for throwing Harvey’s coin in the ocean… Harvey tells him that it will come back. Back to now, they start looking for the cure. Bruce easily figures out where Harvey hid it. 2A-2B (Harvey and Bruce’s names when they stayed at the home), two floors up and two rooms over. Batman wants to do a test first, to make sure it’s what he believes it is. Using a pocket sized chemical lab, he tests it, and realizes that it’s not a cure. It’s designed to, once injected, to burn away the weaker half. Harvey is willing to sacrifice himself, so that Two-Face can pay the price for what he has done. Bruce obviously doesn’t want to kill his friend, so Harvey admits that the acid rain that hit Gotham in the beginning was him. He diluted the acid, hoping that no-one would get hurt, but if Bruce doesn’t give him his “cure”, the full dose will rain down on Gotham at the push of a button. Two-Face pulls out a cell phone Harvey had hidden underneath the floor-boards and gets a call from Alfred. Alfred apologizes for shooting down the Batwing. He explains that Two-Face threatened him that he’d out Bruce immediately if he didn’t do it. That he had known that Alfred put a hit out on Joker near the beginning of Batman’s career. But he pulled it before anything happened. Two-Face somehow learned that the cave entry was through the clock. (As Alfred is telling him this, the GCPD are making their way down the stairs.)

Batman tackles Two-Face through the wall and they tumble down the hill as they reach a cliff. Bruce quickly injects him, and tells Harvey to kill the clouds over Gotham before he fades away. Harvey does so, and realizes that something is wrong. Bruce instead gave him a Booster that, if taken alone, will make it impossible to “cure” either half of himself. KGBeast arrives, and shoves a pole through Batman’s shoulder. The mob tell KGBeast to step away from Batman, that he is theirs now. KGBeast looks forward to wiping out everyone, but Batman tackles him off the cliff. Duke saves Batman by grabbing ahold of his cape, but KGBeast wasn’t so lucky… Duke wants to throw away the coin, but Batman know that Harvey will rely on it now, more than ever. He tells Duke to keep it. They pick up Harvey, and start making their way back to Gotham, as the crowd let’s them pass.

The GCPD make their way to the cave… Bruce’s man-cave. A super-secret design in case anyone were to make their way down there. Gordon smiles, and they all leave.

Two months, two weeks, and two days later — Penguin, Black Mask, and Great White are chilling out at Cobblepot’s place, when they hear the door bell ring. They answer, only to see the KGBeast on their front doorstep. They panic, and run to escape through a secret back passage. KGBeast removes his mask for us to see a smiling Batman, who was just having a little fun. 🙂

Thoughts: This was an entertaining ride. Now, although I don’t think that this is Scott Snyder’s best work, I do think that this story would translate well as a movie. It was very cinematic in it’s approach. It would need some tweaks here and there, because there were some things that happened, and I had no clue why they were happening. The info dump at the end, where Alfred was explaining how Two-Face got the schematics to the cave… that part didn’t make sense to me.

Some things were too convenient. Like how there is a random cell phone that gets a phone call from Alfred at just the right time. Need an acid storm to turn into clear skies?… Two-Face has an app for that. But what I don’t like most, is all the gadgets that Batman has when there is no way he would ever carry such a thing. Who has a mini chemical lab kit? It made me think of the reasons why people would get irritated with Superman. The writers would put him in a situation, and instead of thinking their way out, they gave him a new superpower. And that’s what Batman’s utility belt (or whatever other gadgets he may have) sometimes becomes… a way to quickly deal with the situation as opposed to thinking your way out of it. There was also a moment where Snyder shows us that he did the more than usual research on what the fall from a waterfall can do to a person, just because. Writing elements such as this irritated me, but overall, I still enjoyed the story. And it was fun seeing Batman loosen up and have some fun at times.

John Romita Jr. killed it for this entire story. It was neat seeing his take on these characters, even if his designs sometimes weren’t my favorite. Firefly and Killer Moth from issue one come to mind. However, his design for Two-Face was really neat. There were a multitude of inkers this issue, and you could really tell, ESPECIALLY toward the end. The inks got a little more sloppy. It didn’t look bad, because that sketchy look pairs well with Romita, but it just looks different from Danny Miki’s inks, which are very clean and smooth. Dean White’s colors were spectacular ALL. SERIES. LONG. The guy knows how to paint a page. And his scene transitions as well as flashbacks were so noticeably different, that there required no explanation. Your brain just automatically gets it. Steve Wands has yet to throw me off. His subtle change from Harvey’s dialogue box to Two-Face’s was brilliant and fun to read. It allowed me to switch back and forth in my head to the Animated Series. All-in-all, this was a fun comic, and I look forward to more in this series.