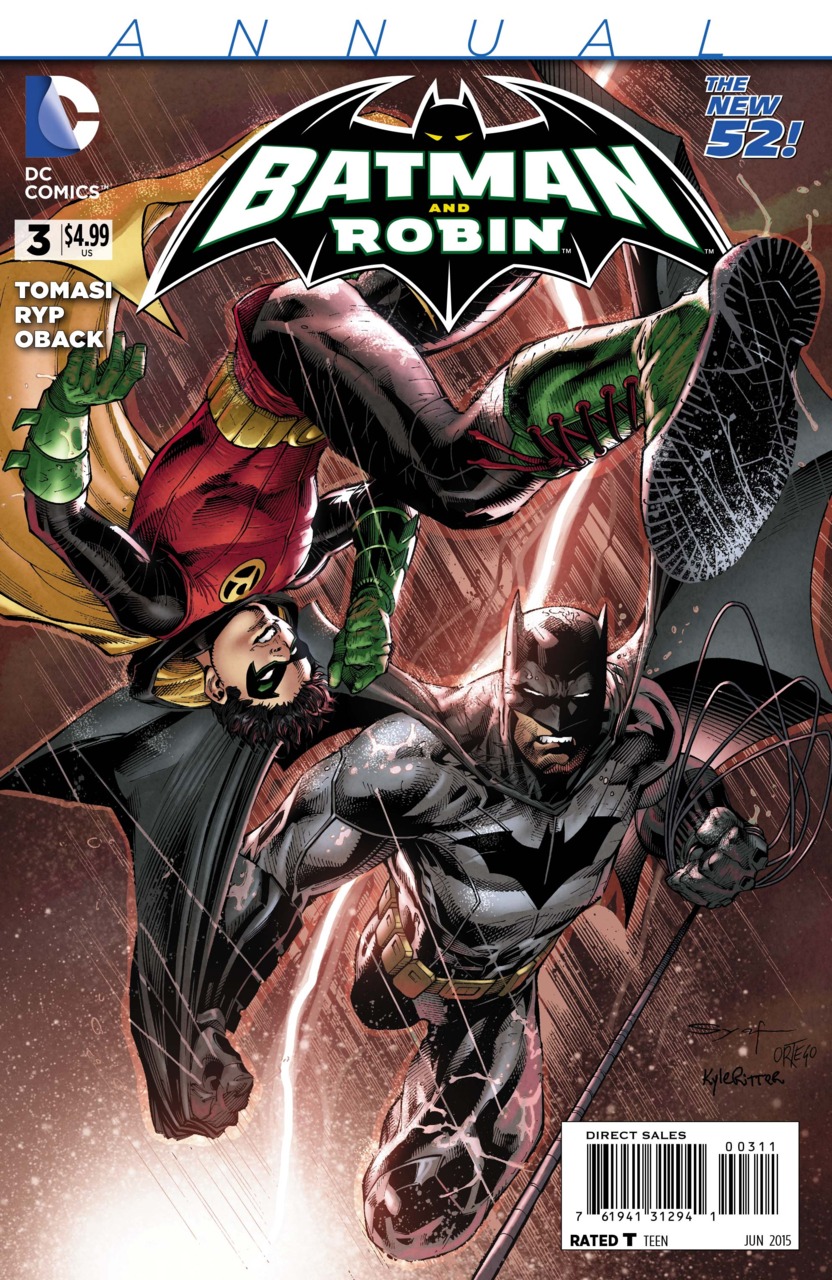 Our story opens with Damian looking through a telescope at the stars high above Wayne Manor. He talks to Titus briefly about finding something new to do now that his powers are gone. We then cut to the batcave where Damian is shown working on an old version of a Justice League teleportation device; Alfred scolds him slightly for having stolen it out of a safe where Batman had placed it…Bruce is currently on monitor duty on the satellite. Finally succeeding, Damian activates the device and races off on a motorcycle with Titus as the two are teleported to the orbiting satellite.

Racing into the monitor room, Batman demands to know what he is doing…Robin responds that Superman (or Supes as he calls him) had said he was welcome on the satellite any time he wanted. As Robin begins to explore, Batman explains about the monitoring systems and how they keep an eye not only on the activities of Earth…but any external dangers in the rest of space. As Robin stares at some monitors pointed at the moon, he notices that one of NASA’s lunar modules seems operational. As the duo boards a ship to investigate they are forced to leave Titus onboard as they don’t have a space suit equipped for a dog. On the trip down, Batman gives some brief history on NASA’s other lunar modules…how some were never recovered after their original missions, and eventually they land on the surface and appropriate a land rover.

They finally arrive at the downed LM and as they look through the windows they discover strange aliens operating the controls inside…and wearing NASA space suits. Upon being discovered, the module suddenly fires its rockets and shoots into the air as Batman quickly tags it with a tracer. Racing back to the land rover, Batman and Robin quickly pursue the fleeing module. As they drive, Robin begins to think through the possibilities of what they witnessed…specifically focusing on how the aliens look like the original Apollo shuttle team, only that they haven’t aged since the 60s…and the fact that they look like aliens. He also notes that the aliens may have been replicating the DNA left behind in the astronaut suits and could explain why they look like the original NASA team.

The module finally stops and the two manage to catch up…upon arriving at a giant crater, they see that several of the modules have been cobbled together to resemble a large space craft. Moving forward, the two heroes agree to investigate and discover where the aliens are headed. Entering the ship, Batman hacks into their systems and learns that Earth is their target…specifically using their technology to terraform the planet to their own uses. However the two are quickly surprised and surrounded by several aliens…they attempt to fight but quickly flee towards the cockpit due to the overwhelming numbers. Sealing the door behind them, Batman orders Robin to secure a window so that the aliens can’t come in from the outside…however this is a distraction when Batman suddenly pushes Robin from the spacecraft. Robin is bewildered on what had just occurred and Batman orders him to return to the shuttle and then go back to the League satellite.

Not willing to abandon his father, Robin rushes back to the land rover and speeds off to the League shuttle. While he reunites with Titus and sets a course back to the crater, Batman is busy trying to sabotage a now launching alien space ship. As the rocket propels itself towards Earth, Batman thinks that the only option is to change the ship’s trajectory. As Damian comes up on the rocket, the two heroes banter back and forth on how Robin should have left Batman to his mission…Damian counters that his plan could result in the Dark Knight’s death, something Damian won’t see happen. As Bruce alters the rockets course to splashdown in Hawaii’s active volcano, he escapes through the same hatch he pushed Robin through. Landing near the mouth of the volcano, Batman acknowledges that Damian disobeyed orders and comments that he is extremely stubborn…to which Robin asks where he could have inherited those traits from.

As the issue ends, Robin and Batman stare up into the sky as Bruce thanks Damian for rescuring him…something Damian comments must have been tough to say. As the two stare at the stars, Bruce asks what his son sees, “endless possibilities.” To which replies that all he sees are “pearls…bright, beautiful pearls.”

Well, although I was really hoping that we would get some sort of explanation as to where Robin is throughout the events of “Eternal” (and I still believe that the “Robin Rises” events happened prior to that) I was actually pleasantly surprised by this issue. Although I wasn’t sure how I was going to react to a “Batman In Space” issue, that seemed to be just the secondary point of the story…what was actually the best parts were the moments between Bruce and Damian that truly showcased their relationship as father and son.

Now, don’t get me wrong…the space story was action packed, a little strange, gave a bit of history of the original Apollo NASA teams, and left some unanswered questions. I liked that we saw Batman on monitor duty, and as always Robin is eager to jump in on the action…only this adventure finds them on the moon battling some unknown alien force. I did wonder where these aliens came from, and why they chose to alter their forms to look like the former NASA astronauts…some questions that were left unanswered, but for some reason it was okay. Although we never discovered where the aliens came from…or even ultimately what their goal was, Batman and Robin were able to stop them and work together as a team.

The Bruce and Damian moments were definitely the best parts of this story. We got to see some great dialogue between the two, and it showcased perfectly how this father/son duo feels about the other. Of course, Batman attempts to get his son to safety and sacrifice himself…but Damian (being the ever stubborn child of the World’s Greatest Detective) can sit on the sidelines and watch his father perish. I particularly enjoyed the final panel with Batman and Robin staring at the stars, Damian comments that he sees endless possibilities (which shows his youthful mind and the ambition to be something better than himself) while Bruce comments that they look like pearls (again bringing us back to a memory of his mother).

Overall this was a great story about a father and son, and I liked that this Annual (and all of the Annuals for this title) chose to focus on the Batman and Robin relationship while a story was happening in the background…nothing Earth shattering or some other tie in, but a simple story that allowed us to see how these two characters feel for one another.

My only drawback (and it’s minor) is that my continuity brain is now exploding that we didn’t get an answer as to where these “Batman and Robin” stories fit into the overall Batman timeline. I would have liked to get that answer…but this story definitely made up for the lack of answers.