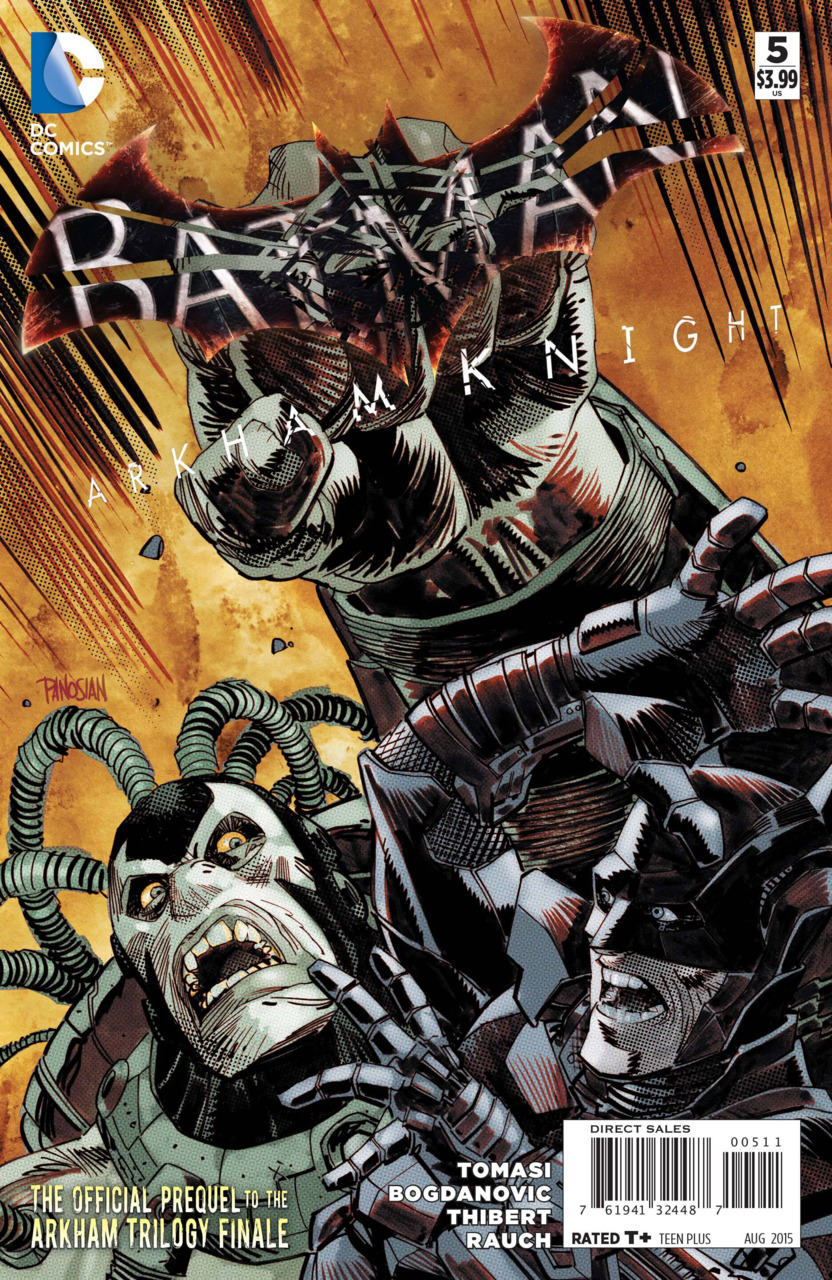 In the first part of this issue entitled “Better Man,” we see Commissioner James Gordon jogging in Marshall-Rogers Park alongside his daughter Barbara Gordon and billionaire Bruce Wayne. As Bruce complains about having to jog, Barbara suggests that he get out more often…however we quickly see a flashback to the previous evening where Batman is busy beating up thugs in that very park. Going to get a drink of water and finding it broken, Barbara comments that “nothing works in this city.” Segueing into the true purpose of this meeting, Bruce comments that he wants to invest in Gotham’s future…into something big – namely James Gordon. Barbara and Bruce then talk with Gordon about how they need him to lead Gotham into a better future and away from the regime created by former Mayor Quincy Sharp. As Barbara is on her way home from the meeting, a mugger stumbles upon her in the park and attempts to threaten her…however she ends up slamming him with her wheelchair and then grappling him as he attempts to flee. Donning a Batgirl mask, she quickly knocks him unconscious. This chapter then closes with the scene shifting to Gotham Stone Ridge Penitentiary as we see several guards releasing Bane from his cell.

As “Bane of Existence” begins, Batman is out on patrol and passes near the former Arkham City where he spots several men on the roof of the Iceberg Lounge. Leaping into action he quickly knocks out the men and wonders what Penguin must be up to…as he is reaching for a transmitter type device, several missiles rocket towards the roof as Batman manages to jump to safety. As the batsignal blazes into the sky, Batman realizes that it is not being generated from City Hall…but somewhere near the city line. Jumping into the new batmobile, Batman speeds off in the direction of Stone Ridge. Elsewhere we see that Penguin and Harley Quinn were monitoring Batman’s progress at the Iceberg Lounge and comments that he has something planned for Batman in his “new place.”

Back at Stone Ridge, the Warden is barricaded in his office as several guards attempt to shoot their way inside…however it is Bane that eventually confronts the Warden and crushes him with his desk. Out in the yard, we see that the batsignal has been cobbled together by a loyal guard who hopes that Batman will respond to Bane’s breakout. As Bane prepares to take out the guard, the batmobile rushes in and knocks Bane into a wall. Leaping clear of his vehicle, Batman takes out the enemy guards as Bane pushes the batmobile away from him and comes striding toward the Dark Knight.

As the enemy guards begin shooting at Batman, he encases himself in his cape which appears to be bulletproof. Releasing several smoke grenades, Batman begins taking out the guards until he is grabbed by Bane. Thrown into a wall, Batman counterattacks with his grapnel gun but he is caught and decked by Bane…again. As Bane prepares to crush Batman’s skull with his boot, the loyal guard shoots Bane point blank with a shotgun. Helping Batman to the batmobile, the guard is then instructed to alert Gordon about what is happening at Stone Ridge. As Bane departs in a guard bus, Batman pursues in the batmobile and quickly ejects and grabs a hold of the speeding vehicle. Smashing through the barriers into Arkham City, the bus arrives at the Krank Co. Toy building as Bane grabs Batman and engages in yet another fight. The issue ends with Bane raising Batman above his head as he prepares to break him.

Although I am patiently waiting for some more information of the titular villain known as the Arkham Knight, this series helped pave the way to the upcoming video game in a great way. Following the events of Arkham City, Batman has since dealt with the last will and testament of the Joker, gained a brand new batmobile…and is now locked in combat with an escaped Bane.

I do like how this story began with Barbara and Bruce attempting to get Commissioner Gordon to agree to being Gotham City’s mayor…I personally think it makes the most sense and wonder if this has ever been attempted in the comics. Although Gordon seems a little hesitant it would make for an interesting story point if he was Mayor of Gotham during the “Arkham Knight” event.

I also enjoyed the use of gadgets throughout this story, we get to see a bit of the new batmobile in action but we also see Batman utilizing his grapnel gun in his fight against Bane, he uses magnetized gloves to grip onto a speeding prison bus, and finally seems to have a bulletproof cape that stops a barrage of bullets (personally I would have enjoyed that feature in the previous games…would have helped me not die several times).

The only drawback is that most of this story is one massive fight between Bane and Batman…although it’s quite visually impressive I would have enjoyed a bit more story development and maybe some explanation of what Bane may be after…did he go to Arkham City by choice? And if so what is he after? I am also curious as to what could happen with Bane…although he hasn’t been featured in any footage of the new game, he is absent. Bane has appeared in all of the Arkham series of games, so it would be interesting if maybe Bane gets taken out by the Arkham Knight, as we have seen AK take out several villains including the new Electrocutioner and Tweedle Dee/Dum. Maybe he saves Batman in the next issue and kills Bane? Definitely looking forward to this ongoing series as we lead into the actual game that comes out later this month.