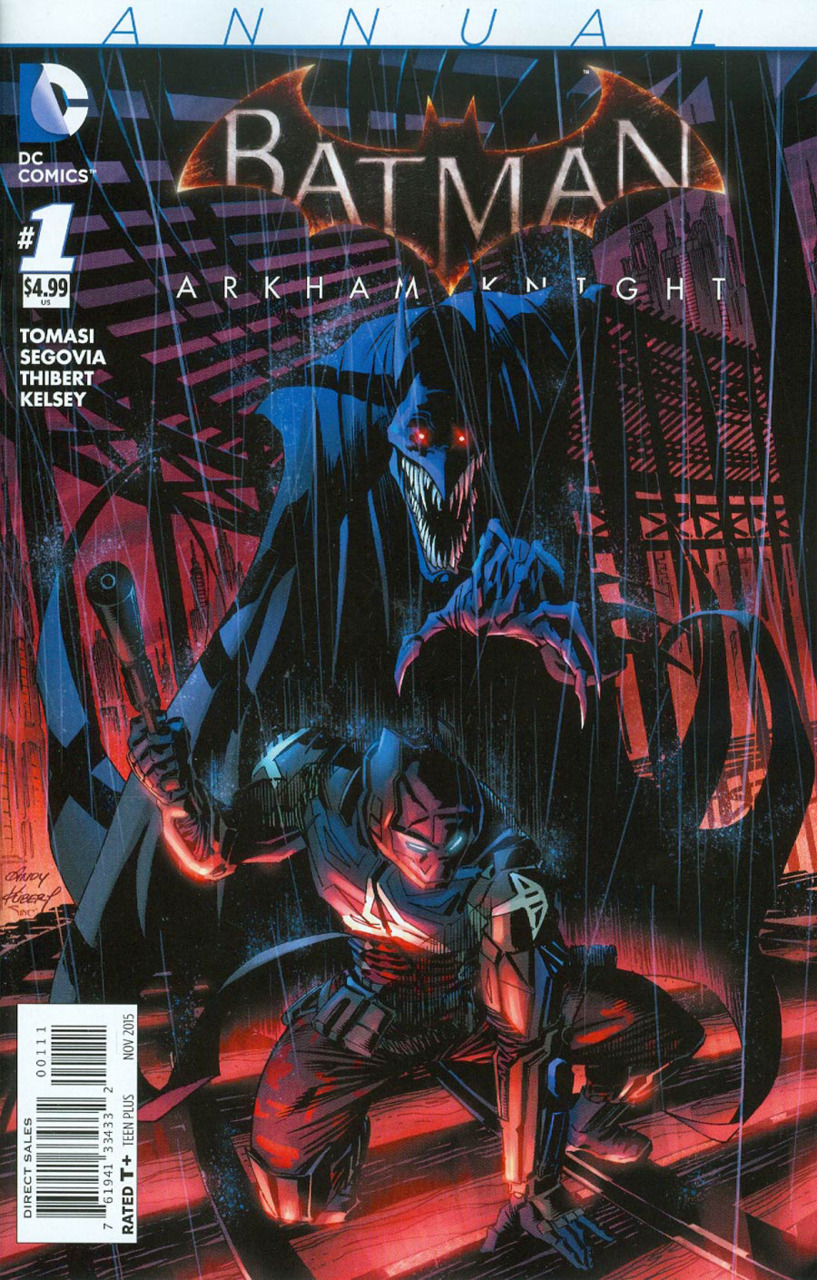 As our issue opens, Firefly is busy taking on several security members from Gotham Bank. Protecting an armored car, the guards open fire on Firefly who retaliates with his flamethrower…engulfed in flames, one guard’s gun is pulled from his hand by a grapnel and we see a fire extinguisher tossed back at the villain. As the canister explodes the Arkham Knight drops down on top of the disabled villain. Capturing the cash, the Knight tells the guards to stay down and lights up Firefly with his own flamethrower. Noting that he has been burned worse before, the Knight tells Firefly that he is going to prepare him for a war with Batman.

Arriving back at his lair in Chinatown, the Knight comes back with the stolen money and Firefly’s jetpack. Tossing everything down on a workbench, the Knight asks what is next to do…and Scarecrow responds “next we steel ourselves…to take on the night.” The two villains then talk about their plan to take down Batman, using the money to buy favors…all that is truly needed is Scarecrow’s toxin. As the Arkham Knight discusses his beliefs on heroes and villains, he states that these people are simply opposing points of view. Scarecrow then tells the Knight that instead of playing strong, it’s wiser to play smart…and this is what he intends to do.

Collapsing into unconsciousness, the Arkham Knight finds himself drugged by Scarecrow’s toxin. Confronting several of his fears, the Knight first sees his parents…and then a deadly voice telling him how they had never wanted him in the first place. Turning around, Jason sees Joker standing next to the current Robin, Tim Drake. Jumping into battle, Jason takes on Tim as a growing mob encourages Robin to win. Taunted by his former tormentor, Jason fights back and the crowd begins to cheer for him – Jason Todd, the Arkham Knight. Knocking down Tim with a punch, Jason states that he was “just a third try at a bad idea.” The image changes and Jason find himself on the snow-covered lawn of Wayne Manor, arriving at the door he is greeted by Alfred. Asking who his next victim will be in his constant fight, Alfred pulls out two guns and shoots himself in the head. Mutating into the Joker, the clown invites Jason inside and they find Bruce standing alone in his study.

As Jason asks Bruce what is happening, he seems to not recognize his former Robin. Suddenly, Jason, Joker and Bruce are surrounded by many different versions of Batman…all of which start attacking Jason. Taunting him throughout, Bruce states that Jason is too weak to fight back against the Batman…however; Jason suddenly grabs Bruce by the throat and suddenly pulls off his face to reveal himself wearing his former Robin mask. Stating that he knows that he is up against himself, he knows what to do. Shooting Robin through the head, the Knight states he has no fear and is prepared.

Awakening from his vision, Scarecrow states that he is stronger because of his ordeal…otherwise he would be dead. Stating that his former truth is now dead, the Knight swings off into the night stating that they will begin Gotham’s final night…and end it with a scream.

A story worthy of the “Annual” title, this tale is not something completely necessary but manages to highlight the true motivations of the Arkham Knight.

Almost self-contained within a nightmare, the story begins by showing the Arkham Knight taking down Firefly. It seems that Jason spent a lot of time getting the villains to gather at Scarecrow’s initial meeting in regards to battling Batman. Following this, the Knight returns to his hideout and gets gassed by Scarecrow.

The remainder of the story shows Jason battling against his “truths” and utterly eradicating these facts…becoming completely self consumed by his rage against Bruce. Within the dream, Jason first battles against the current Robin while being taunted by the Joker. We then see Jason battling against several different versions of Batman seen throughout the Multiverse. I have to say that these images we great to see, maybe because it was fun to identify the different Batmen…I personally saw Adam West, Batman Beyond and something that looked similar to the armored suit seen in the trailers for Batman v. Superman.

Overall this was quite an interesting story that showcased Jason’s true fears and sees him fighting back and getting ready to take on Bruce. Again, not a completely necessary story but it did allow for the final stages of setup that we would see in the Arkham Knight game.