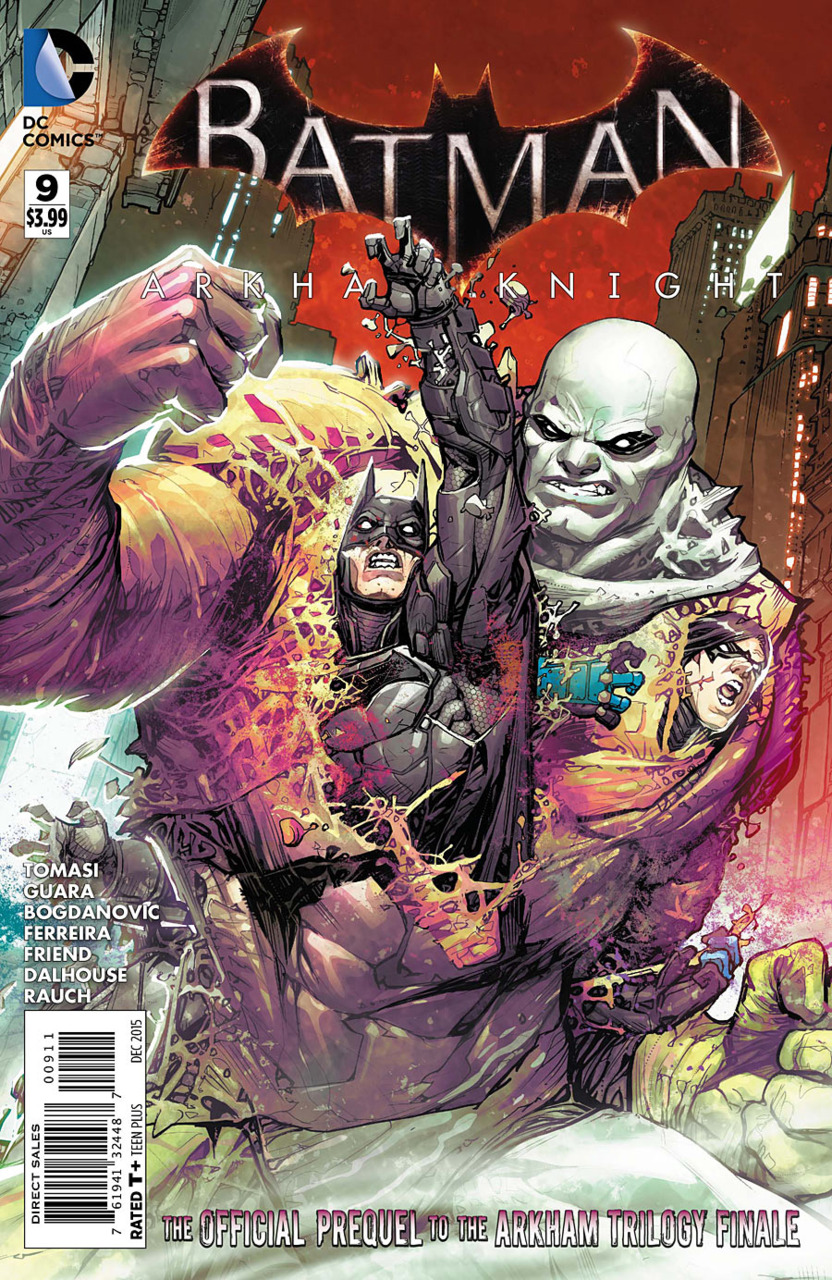 Plummeting to the ground, Batman lands on the concrete with the metamorph as Deadshot aims a massive gun left behind by the Stagg Enterprises employee. As the Dark Knight holds off his foe, a news helicopter containing Vicki Vale reports on the battle and gives a bit of back-story surrounding Stagg and his company. As the GCPD arrive on the scene, Gordon tells his officers to get the news helicopter out of the area…meanwhile Vicki updates her viewers (and the readers) of Gordon’s potential as a mayoral candidate.

As Deadshot readies his shot, he is hit from behind by Gordon as he attempts to arrest Lawton. Realizing his mistake, the two turn around to see the metamorph engulf Batman. Meanwhile, across the city, Nightwing reawakens after his fall and explains to the officers about his bike getting hit…mysteriously the bike itself is now missing. We then cut to the Arkham Knight who is seen riding the vehicle back to his hideout.

Back with Batman, the Metamorpho utters its first words “mmooorre…” as Batman pulls out his line launcher. As Gordon and Deadhshot begin firing on the creature, the metamorph reacts and knocks the two flying. Flying free, Batman throws a batarangs into the creature and covers Gordon and Lawton as a massive explosion engulfs the metamorph. With the threat over, Gordon returns to arrest Lawton as the latter tries to explain about Task Force X and working for Amanda Waller…however, Gordon quickly punches Deadshot out. The chapter then closes with Penguin and Harley Quinn looking on the news feed and realizing that they’ve been screwed over by the Suicide Squad for failing to acquire the metamorph.

We then cut the GCPD holding cells where Aaron Cash and Gordon are interrogating the captured Deadshot. However this is interrupted by Amanda Waller who storms in and demands Deadshot’s release. As Gordon heads to the roof for some air, Batman arrives with Bruce Wayne explaining that he had hid himself following the attack on his car. Arriving back in his office, Jim finds both Waller and Deadshot gone. Calling Alfred, the faithful butler arrives at GCPD to collect his employer…but not before thanking “Batman” for his rescue. Taking off the costume, Nightwing tells Alfred about his attacks and missing bike.

Cutting to the Arkham Knight’s headquarters, the Knight is busy downloading data from the captured vehicles and updating the software onto his cobra tanks. Taking a quick spin around the block, a new monologue begins talking about how long he has been waiting to take down the Batman…as “Suicide Blues” comes to an end, Calendar Man reveals himself and states that the Batman will finally die.

Kicking off a new story called “The Apprentice,” the new chapter opens with Robin fighting against several simulations in the batcave including Bane, Killer Croc and Clayface. Almost gaining the upper hand against his opponents, Robin takes a quick punch to the face by Croc and goes down. As Alfred ends the simulation, the butler comments that the program was designed make Batman and his allies better…not be there “final resting place.” He starts to mention the previous Robins, but Tim quickly cuts him off. Tim states that he only got the “job” because there was an opening and isn’t afraid to train hard to better himself. As he looks over to the display cases containing both Dick Grayson and Jason Todd’s Robin costumes, Tim says that he earned his right to be in the batcave…but not waste away inside the simulator or lug around equipment for Batman.

The following morning, Tim arrives at Robinson Academy where we discover that he is a teacher. In class he unveils a mysterious box which pertains to that day’s lesson…opening it, he shows off a vial of Titan formula and talks about how the chemical altered the Joker. Explaining that that day’s field trip will take them to Wayne Labs (who is experimenting with the compound), Tim offers to sample the Titan to witness its effects. Downing the liquid in front of his class, the students are horrified…however, Tim comments that science can be both beneficial and utterly terrifying, explaining that the liquid was actually grape soda.

Arriving at Wayne Labs, Mister Drake and his students meet with a lab representative who begins touring them around the facility and explaining how they have been trying to experiment with and understand the properties of the Titan formula. Near the end of the tour however, the group is quickly held hostage by three masked villains. Attacking the facility, the issue ends with Tim diving into a storage unit in hopes of quickly changing into Robin.

Another great issue by Peter Tomasi! Opening up with the continued battle against Metamorpho, Batman and Deadshot are able to take down their opponent with the help of Jim Gordon. I was a little concerned about the method in which he was destroyed…seemed awful violent for Batman. In addition, I thought that the aftermath of the battle was a little anti-climactic as Gordon seemed more concerned with arresting Deadshot that cleaning up the metamorph…don’t you think that should be taken care of????

However, Deadshot ends up arrested and Waller comes to his rescue…no big surprises here. I like that they continued to wrap up the initial story that involved the Squad attacking Bruce Wayne as we see Batman (really Nightwing) dropping off the billionaire at GCPD. Continuity is extremely important (in my opinion) and I like that Tomasi chose to wrap up the loose end of where Bruce Wayne mysteriously disappeared to in the previous stories.

As Suicide Blues ends, we get a tease for the upcoming villain…it seems that Calendar Man is set to take down the Dark Knight…however, I find it a little anti-climactic since we know that Julian will eventually fail as we get to see an Easter Egg in Arkham Knight that shows his plans were spoiled with the release of Scarecrow’s toxin on Halloween.

Lastly, we get to see the beginning of a new story that sheds some Arkham history on Tim Drake…not only is he still training as Robin, but we get to see Tim’s life outside of the costume. For some reason, I find it extremely fitting that he is a teacher…with his exceeding intellect and deductive reasoning it seems a perfect fit for him. And of course, who could not help but notice that the three thugs who take them hostage are wearing Killer Croc, Bane and Clayface masks…similar to the simulation he was fighting against at the beginning…very poetic.

Overall this was a good conclusion to the Suicide Squad story, I liked seeing Deadshot and Batman working together…however I think Metamorpho should have been taken down in a different way, and possibly captured rather than blow up. In addition, it was great to see the focus shift on Tim Drake as we have not gotten very much information on his character within the Arkham universe.