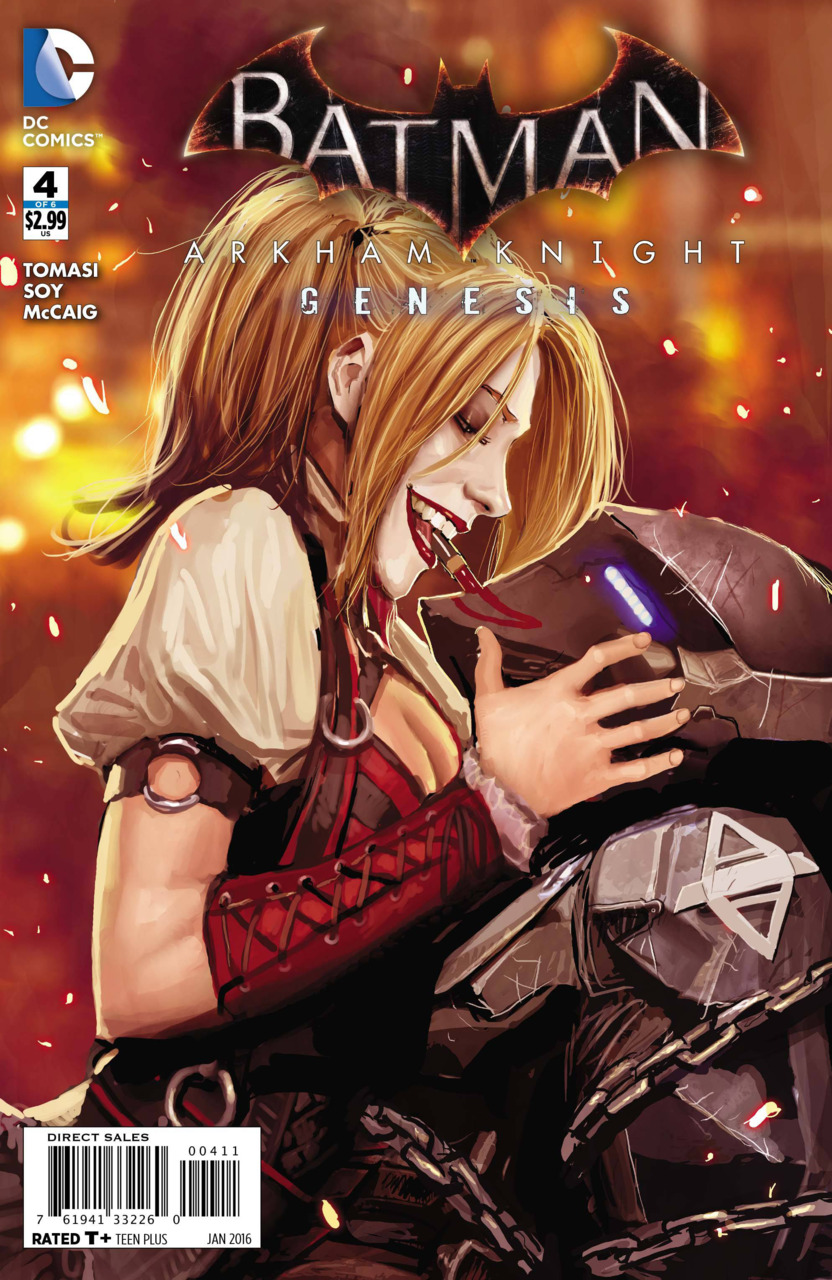 As the next issue opens, we pick up on the events of last issue when Joker shot the bound and tortured Jason Todd…seemingly killing him. We begin by seeing Joker and Harley Quinn threatening a doctor to save Jason’s life. The doctor ends up succeeding but it doesn’t bode well with his own chance of survival. Shooting the doctor dead, Joker places the still alive Jason Todd in the care of Nurse Harley Quinn.

Cutting back to the present, Harley Quinn is shown breaking into a vault by placing a bomb up against the door…the bound and gagged security doesn’t survive, as Harley laughs at her own joke. Summoning her henchmen, the goons begin loading bags of money onto a truck…however as the clowns depart, the truck is attacked by none other than the Arkham Knight.

Throwing Harley from the van, the Knight points his guns at her as Quinn demands to know who the Knight really is…as we flashback into the past, the Knight comments that she was the one who had originally named him. Deep beneath Arkham Asylum, Nurse Harley is shown torturing and brainwashing the still captured Jason Todd. Using electro shocks and some mind altering drugs, Quinn succeeds in warping Todd’s mind into believing Batman is responsible for all of the bad circumstances that have happened since his capture.

As the Joker arrives, he pulls Harley from the room and introduces her two large men standing next to him – Catman and Blockbuster. Dressing them both in Batman costumes, Joker is ready to test out his new and improved sidekick. Unleashing the two hulking brutes on Jason, Joker watches from a distance as he manages to break free and battle against the bat-dressed villains. Wishing to push the bar even further, Joker throws Jason a pair of guns (which will become his signature weapon), but Harley interrupts the scene. Shooting and killing Blockbuster herself, Harley goads Jason into killing Catman calling him “Arkham’s knight in shining armor.”

Cutting back to the present, the Knight removes his mask and speaks to Harley about the events from the past and how he has a plan to take down Batman and rule over Gotham City. Declaring that the stolen money is his now, the issue ends with the Arkham Knight swinging off into the night.

I have to say that I am REALLY enjoying this series. The way that Peter Tomasi is telling the back story of the Arkham Knight gels really well with the story that was developed and released by Rocksteady Studios.

I was extremely interested to see how Joker had managed to save Jason, and the obvious answer was the Robin suit that had protected him. (How did I not think of that?) Of course, the Joker still needs help in saving Jason’s life and the helping doctor doesn’t see the light of day afterwards. It was also interesting to see how involved Harley Quinn was in turning Jason into the Arkham Knight…to me, it seemed like she was almost MORE responsible for Jason’s change than Joker was. Not only does this alleviate Harley in my eyes, but we see that Jason also feels that she was great responsible for his change.

Another thing to note was how Harley was being treated by the Joker in this issue. Not only does the Clown Prince treat her like crap (nothing out of the ordinary), but he outright looks to replace her with Jason Todd once he has become the Arkham Knight. Kind of makes me feel bad for Harley…but only for a second.

Overall this series continues to be a highlight of my comic month and I look forward to seeing how the Arkham Knight will continue to manipulate the other villains, and to see his stunning origin come to a conclusion.