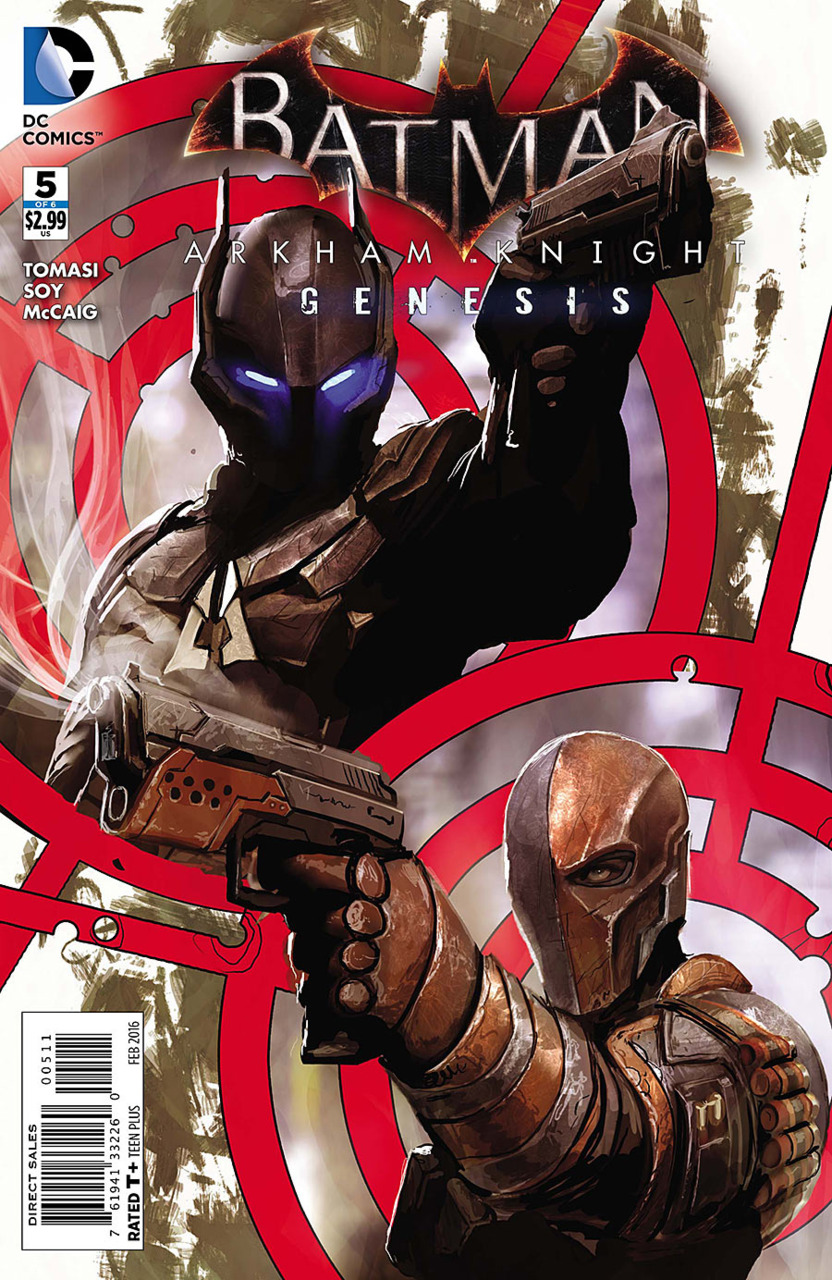 Opening upon a press conference, Jason Todd looks on as Bruce Wayne is hailed as the man spearheading the “Gotham Reborn” movement and is looking to help the city following the disastrous events at Arkham City. Leaving the area, Todd heads out into Gotham City…passing Pauli’s Diner along the way. Descending down into an abandoned subway station, Todd opens a secret panel and dons the suit of the Arkham Knight. A voice above him asks if he has come to die, and the Knight responds with “no…I’m gonna live forever!” Attacking with ferocity, Deathstroke drops down and the two fight for a brief period before Slade stops and comments that he wanted to be sure that some Gotham freak hadn’t stolen the Knight’s armor.

Moving off onto the subway platform, Deathstroke updates the Knight on his army’s progress and unveils one of the Cobra Tank drones. Showing off the tank’s artillery, the Knight flashes back to two years prior and the events of Joker’s takeover of Arkham Asylum. With the clown distracted, Jason is shown attempting to escape from Arkham but is quickly attacked by none other than Deathstroke. The assassin explains that he had been paid by Joker to kill Jason during the mass chaos of the Asylum attack. Offering Slade triple whatever the Joker was paying, Deathstroke stands down and the two men run to a waiting helicopter. Flying away from his former cage, Todd tells Deathstroke that he works for him now and that together they will bring down Batman and Gotham City.

Later that night, Jason (equipped with a Deathstroke mask to hide his identity) quickly enters Wayne Tower in an attempt to pay Slade what he is owed for the rescue. Breaking into Bruce’s office, Todd quickly transfers the needed money…and on the way out throws a computer screen through a portrait of Thomas and Martha. However, he is quickly surprised by the arrival of Robin (Tim Drake). Attacking his replacement with abandon, Jason slams Tim through a coffee table and quickly leaps free of the building. Believing Jason to be a Deathstroke sidekick, he grapples towards the helicopter only to be promptly dropped towards the ground by Todd.

Back in the present, Deathstroke informs the Knight that he is headed back to South America to oversee the next phase of militia training as the Arkham Knight grapples off into the night thinking of how those first stolen millions have led to his victory over the Batman.

More answers begin to trickle out as we see how Jason Todd escaped Arkham Asylum and teamed up with the deadly assassin known as Deathstroke. Using the Arkham Asylum riot as a means of escape was a good move by Tomasi…however I’m still curious as to how Jason managed to get himself free. He seemed pretty tied up and contained the last time we saw him, and I didn’t think it would have been that easy to escape from the Joker. Deathstroke’s arrival seemed a tad convenient for Todd as he escaped and Slade seems to agree to the change rather quickly…how does he think some random prisoner is going to get him triple the money promised by the Joker?

However, we soon see that Jason assaults Wayne Tower and steals the money from Bruce. I liked that we had a brief meeting between Jason and Tim, but would have liked the fight to last a little bit longer.

This issue seemed to fly by very quickly…almost to the point that I thought I was missing pages. Overall this is a very quick read that explains how Jason escaped Arkham and teamed up with Deathstroke. It almost feels like Tomasi is running out of unique ideas and is simply running towards the finish line…so I hope that he has some good story beats planned for the coming issues. The art is (as always) superbly done and I am enjoying Dexter Soy’s work on this book…maybe DC should get him on a monthly title?

Definitely pick this up if you’re an Arkham fan as this lays more groundwork for how the Arkham Knight initiated his plan to take over Gotham City.