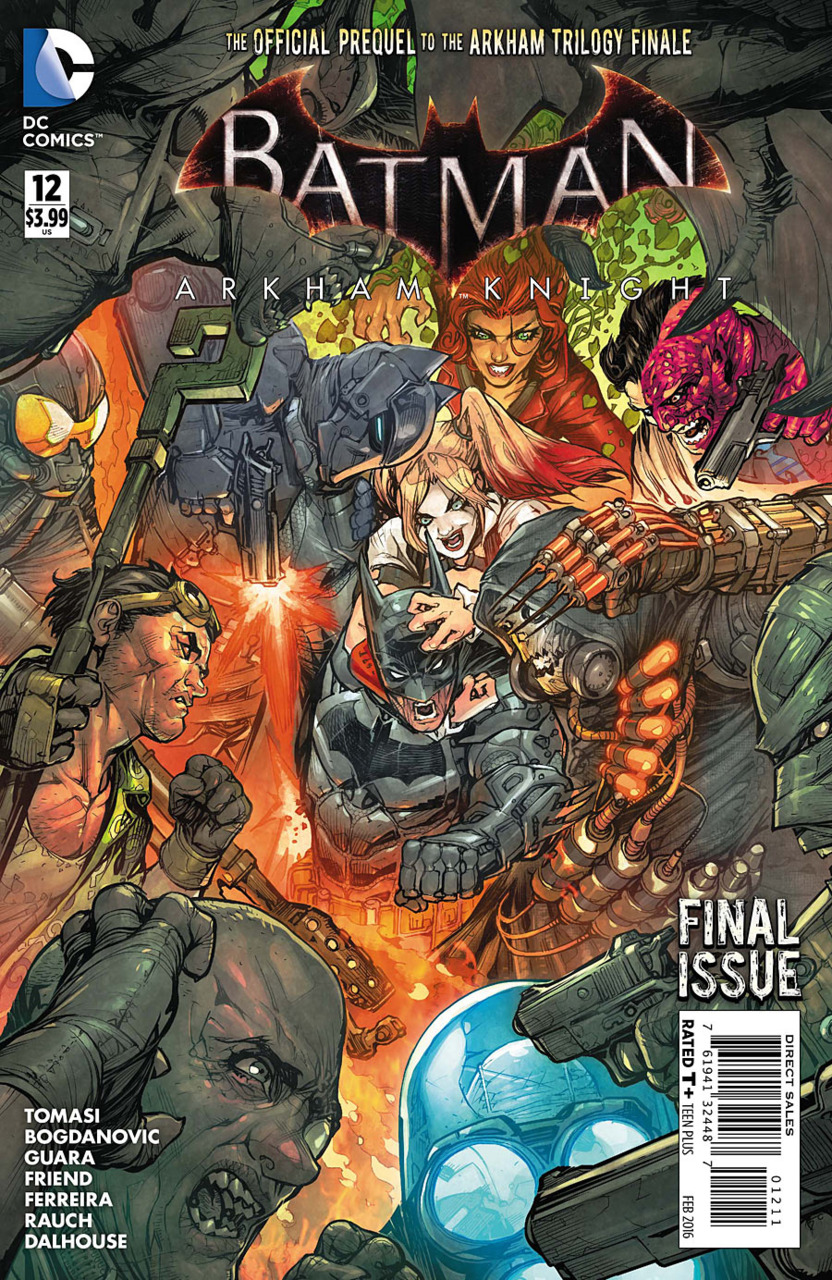 Editor’s Note: This is the final issue of the series. There is a one-shot planned for next month focusing on back-stories for some of the characters, but the series ends with this issue.

Held in the air above Wayne Tower, Batman is still within Bane’s grasp as the fear induced villain rambles about how Batman destroyed his home of Santa Prisca. Over in the Penguin’s lair, Harley has also gone nuts and is attacking the Penguin. The issue cuts between these two events as Batman attempts to escape from Bane’s clutches as Harley goes crazier than usual and eventually attacks herself with a baseball bat. Receiving a phone call from Scarecrow, Penguin informs him that he will send someone to pickup Poison Ivy from the Bludhaven police department. Back with Bane and Batman, the villain threatens the lives of Bruce’s family as the Dark Knight successfully escapes his grasp…only to realize that Bane has also (somehow) raided Batman’s supplies and grapples after the Dark Knight.

We then cut to Gotham’s sewers as we see Riddler busy setting up one of his many traps…however he is confronted by none other than Scarecrow who informs Nygma that he has someone he wants him to meet. Back with Batman, Bruce finally defeats Bane as he freezes him to the side of building.

Cutting to Chinatown, Two-Face arrives at a secret location and enters the building to meet the Scarecrow. Meanwhile, Bane breaks free and continues his attack on Batman. Cutting back Chinatown, the assembled villains watch the battle between Batman and Bane as Scarecrow and the Arkham Knight explain their plan. The villains however are a bit skeptical about the new arrival in the Knight.

Back in Midtown, Batman continues his battle against Bane as Gordon and the GCPD arrives on the scene. Cutting back to the Knight, he orders Deathstroke to shoot the location with a missile in order to prove himself to the villains who continue to doubt his credibility. However, they still doubt and Scarecrow tells the Knight to prove himself to them.

Throwing Batman into a squad car, Bane is suddenly grappled by a passing vehicle and dragged away. As the Knight leaps from the car, he engages the enraged villain. Proving that he is an extremely deadly foe, the Arkham Knight rips Bane’s throat out. Shooting him several times, Bane is thrown into a nearby Ace Chemicals truck which is shot by the Knight. Erupting in flames, Bane is barely alive. With a final shot to the head, the Arkham Knight kills Bane.

Back in Chinatown, the villains discuss Scarecrow’s plan and eventually are brought the corpse of the charred former villain Bane. Realizing the depths of insanity that the Knight is willing to go to the villains look on as he grapples away into the night.

As the final issue begins to close, Batman arrives on the rooftop of GCPD as Gordon shows him a plethora of bullet casings found at the murder scene of Bane. Gordon also introduces Batman to an officer name Owens as he believes a stronger connection with the GCPD is needed…in case Gordon becomes mayor. Owens brings Batman up to speed on some ongoing cases such as Penguin’s gun smuggling and random corpses piling up around the city.

Cutting to the sewers, the Arkham Knight and Deathstroke begin their final preparations for Gotham City’s assault. Launching into a standard villain monologue, the Knight talks about how Batman and the city will suffer as he is surrounded by a montage of villains that accost the Dark Knight throughout the events of “Arkham Knight.”

The issue closes with Batman arriving at Oracle’s Clocktower to follow up on Bane’s murder…with no new evidence, Batman continues his patrol. Meanwhile, Officer Owens arrives at Pauli’s Diner and is subjected to a new version of Scarecrow’s toxin. The series closes with a close up shot of the master of fear himself.

Sad to see this series end, but we had to get to the events of the videogame at some point….and what an action filled final story it was. Through the course of this tale, Batman battles against Bane who is tripped out on fear toxin. Believing the Dark Knight to be some demonic, fiery devil, Bane sees Batman’s death as his only hope to save his former home. Meanwhile, Scarecrow and the Knight assemble the villains Penguin, Two-Face, Riddler, Harley Quinn and Poison Ivy and reveals their daring plan to take over Gotham and bring down the Batman himself.

Finally, the Knight is forced to prove himself because…well, he’s the new guy. And what does he do? Kill Bane. Called it. Kind of had the sinking feeling way back at the beginning of this series that our beloved villain wasn’t going to make it out alive. And what a brutal fight it was…throat crushed (or ripped out), shot in the legs, exploded in fire, and then gunned down. Point proven Arkham Knight. So proven that Poison Ivy thinks it’s too much. Guess we know how she ends up captured by Scarecrow at the beginning of the game.

Lastly we see Gordon introducing Bats a new office named Owens. Obviously fans recognize this guy as the officer from the beginning of the game, so we know things aren’t going to end well for him. But I like that Gordon has the sensibility to think that if he becomes mayor, Batman is gonna need a stronger tie to the GCPD than just himself.

Overall I have to say this series was quite enjoyable. I’ve always been a sucker for videogame tie-ins and I have often praised the Arkham Universe. Well done Peter Tomasi, well done.