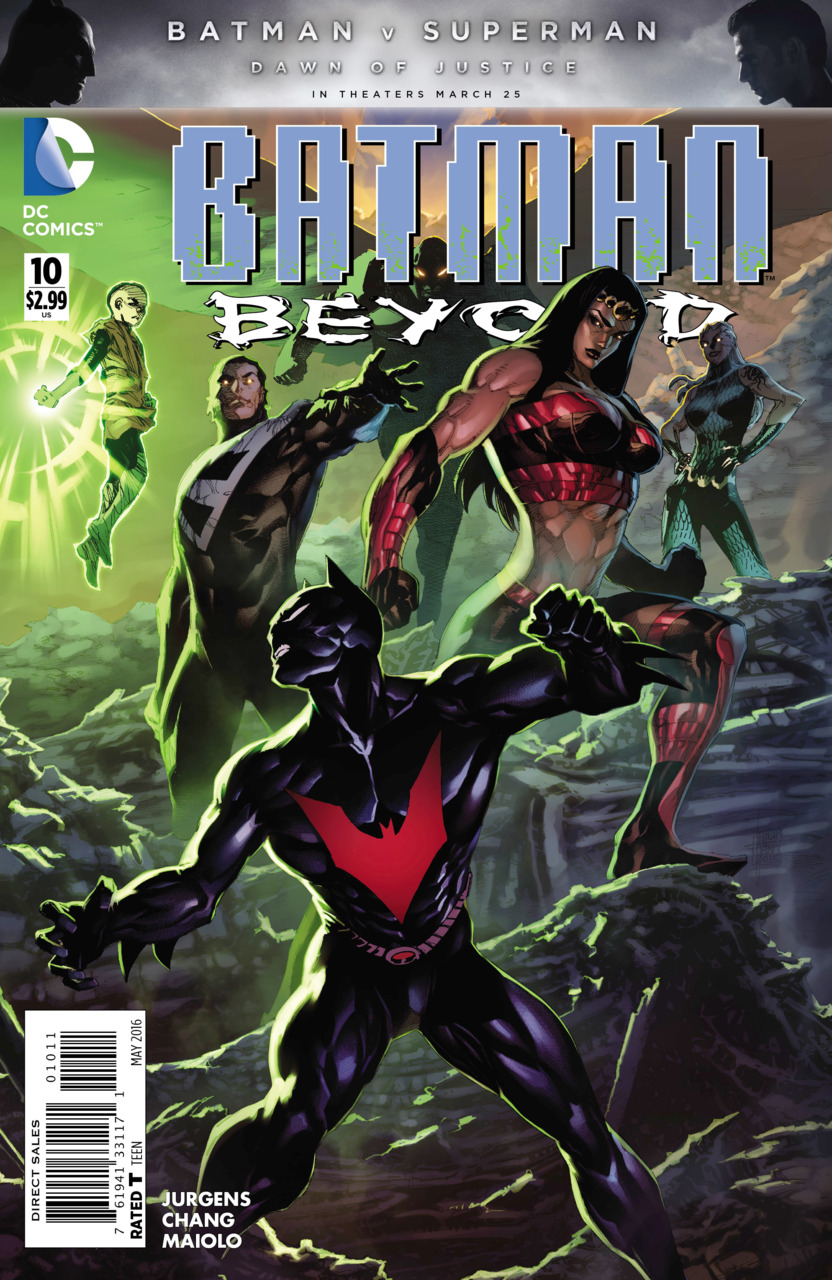 “City of Yesterday Part Three” continues the fight between Batman and the walking animals of Dr. Cuvier. While this fight is going on, Cuvier and other animals watch and comment on the fight. The animals defend the work Cuvier did on them claiming that they are better than the normal humans. The experimentation was done on them after Brother Eye came and the testing saved these creatures from the Eye. One of the creatures talking to Cuvier is identified as Tuftan. Cuvier does ask the combatants not to kill Batman as he has a surprise for him.

Inside the Watchtower, Matt follows the Green Lantern Ring to the pod holding Kai-Ro the Green Lantern. The ring breaks through the glass and reaches Ro’s finger. Kai-Ro instantly awakens and declares that the boy is not their captive. Matt identifies himself as Terry’s brother. Kai-Ro starts to free the others, Big Barda, WarHawk, and Aquagirl. As each member of the League is freed, each vow to kill the man that imprisoned them. Kai senses that the world has changed and he notices that Micron is not with them. As he says this a giant talking elephant attacks the League. He tells the League to look on the orb.

We shift locations to Gotham. The people are still camped outside the walls demanding to be let in because they need the food, water, and medicine that is housed inside the city walls. One father carries the lifeless body of his daughter to her mother and brother. He blames her death on the inhabitants of Gotham.

Inside the wall, Mayor Fox and Barbara await the relief shipment. Everything they requested did not come though. It is reported that Precinct Four refused to load the supplies. Gordon requests the officers at the wall to open the gate so they can deliver what they have to the refugees. One of the officers refuses and Gordon asks him to resign for not doing his sworn duty. Just then the wall explodes and Gotham is invaded by the refugees demanding access to Gotham’s supplies declaring that they belong to everyone.

Back in Metropolis, the fight outside the Watchtower continues. Batman is struck by and unknown foe. As Batman is hit, he recognizes the voice of his assailant. On the next page it is revealed to be Big Barda. She accuses Batman of doing the Eye’s work and she will kill him for it. Barda is not alone, she is also with WarHawk, Green Lantern and Aquagirl. All the Justice League members attack Batman who is confused about this attack. Why are the League accusing him of working with Brother Eye? From the art we see that the League believes that Batman is one of Brother Eye’s cyborgs. Batman shouts that Micron said the League was dead and Tuftan says that Cuvier said the same thing. Cuvier says that the Eye had them in stasis for future uses. Batman asks about the Justice League cyborgs he fought before including Superman, Wonder Woman and John Stewart. Cuvier says that they were artificial constructs created to demoralize the populace. Micron’s own memories were changed to shield the truth. Batman realizes that the League’s perception of him is being altered.

While this is going on, Matt watches. He realizes that Batman does not stand a chance unless…. His thought is cut short as the League continues their assault on Batman. Matt screams C-3 at Tim as Barda fires on him seemingly killing Batman. Next issue Man and Superman.

I liked this issue, it gave good character beats, backstory reveals and a ton of action.

As for the character beats, we see Barbara as being very altruistic. She wants to help the refugees even though some of her own officers do not. My question about this sequence is where is Micron. Tim left him in Gotham when he left to search for Matt.

As far as the backstory, we get a revision of Micron’s original story from a couple of issues ago. The League did survive but they were captured and placed in suspended animation for some reason that has not been revealed yet. My question is where is Superman? In last issue, we clearly see him in a pod with the rest of the League and we see him on the cover of this issue but Kai-Ro does not free him and we do not see him in the fight with Batman.

This issue is loaded with action. We get a continuation of the battle from last issue with the animal men. We even get some exposition that does not distract from the action we are seeing. The exposition becomes a commentary on what is going on and the benefits of Cuvier’s experimentation. We get the refugees storming Gotham. We get a no holds barred battle with the Justice League here. We end this issue with a definite cliff hanger even though it is obvious that Batman was not killed. We do get a hint of Superman in the next issue teaser.

This issue shows a marked improvement in this title and I am excited for the next issue this month.