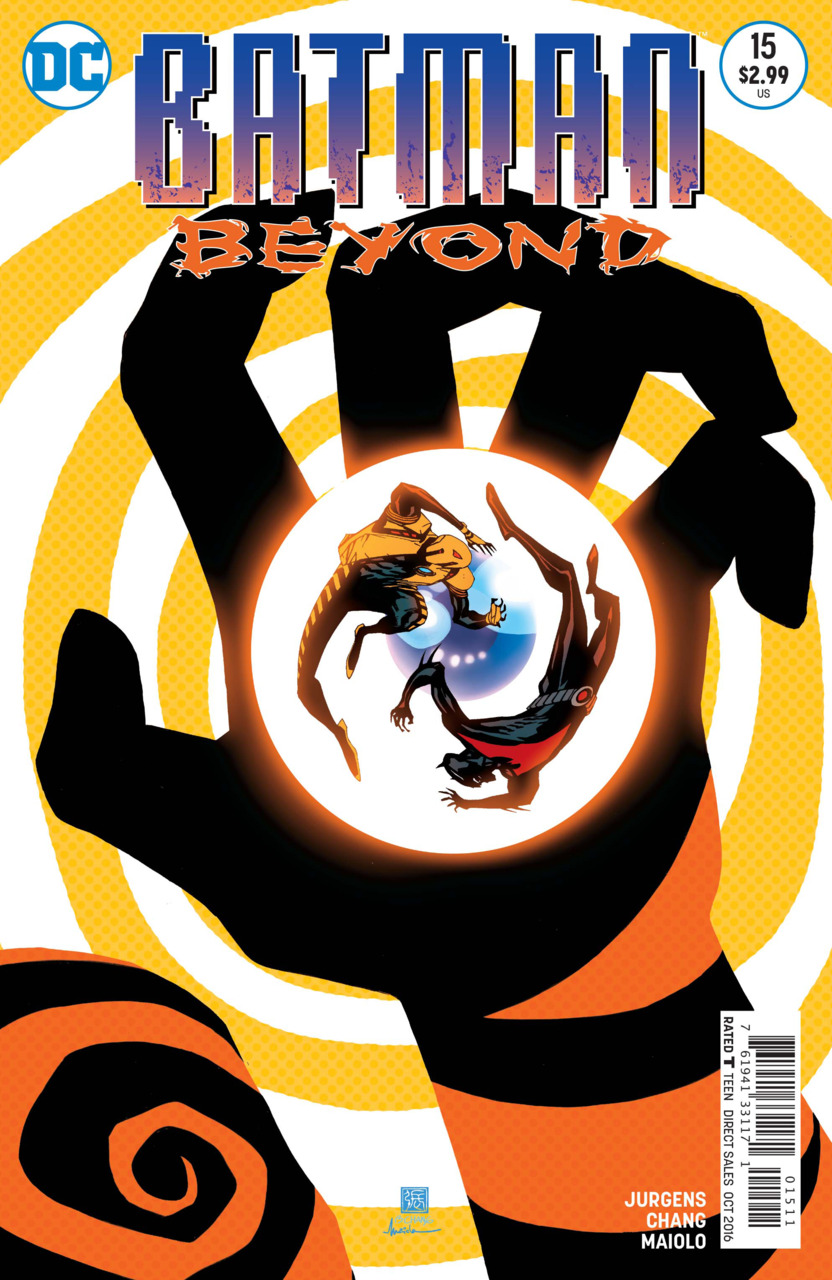 “Wired For Death” part 4 opens with Batman and Commissioner Barbara Gordon fighting a riot and looters. There has been a blackout in Gotham and the population has stared rioting at a pharmacy . Matt is in the Cave monitoring the situation with the computers. Matt reports a second blackout and Batman and Gordon move to the new area leaving the cops behind to wrap up at the pharmacy. We see that Spellbinder and Rewire are watching the action. Spellbinder keeps filling Rewire’s mind with the thought that Batman and Gordon wants him dead.

While on her way Gordon comes face to face with Rewire. He blasts her car which erupts into flames and wrecks. Barbara crawls out and reaches for her gun but Rewire blasts the gun out of her hand. She goes to hand to hand and manages to kick Rewire’s helmet off revealing that it is really Terry McGinnis. The old woman who is really Spellbinder comes up behind her and admits that he knows that this Rewire is not Davis but Terry instead, but this information will not help her. He then tells Barbara that he is really Mrs. Shelby and Rewire attacks Barbara.

Batman meanwhile is stopping a mugging and when the police arrive Matt reports that Gordon’s car was found crashed on the bridge with no sign of her. The evidence shows that the car was attacked by Rewire. The good news is that the power is back all over Gotham which means that the blackouts were caused by Rewire and Barbara is the bait to get to Batman. Batman is sure that Rewire will tell him where Barbara is being held. He sees what looks like a Red Robin signal over Blackgate Prison which Matt says was closed years ago making it abandoned now. Batman enters the prison as we get a comedic interlude when Matt realizes that the Batcave is filled with bats. Batman muses that the cave is not called the Butterfly Cave.

Suddenly Batman is attacked by a brainwashed Barbara Gordon who is saying that Batman must die. Batman overpowers her and says that he can bring her back to the Cave to fix this situation when he is blasted from behind by Rewire. Rewire destroys Batman’s munitions so Tim decides to go old school and factions a bow staff out of a pipe. While this is going on Matt who is monitoring the situation from the cave starts to think that he recognizes Rewire’s voice. Batman knocks Rewire’s helmet off revealing to himself and Matt that Rewire is Terry McGinnis.

Spellbinder recounts that he found a mortally wounded Batman after a fight with Brother Eye’s Borgs. Terry then started to serve him and when Brother Eye fell, Spellbinder and his associates started to fill the void revealing that he was behind the man beasts creation and the mind control of the Justice League in the previous arc.

Matt in the cave goes to the Batplane and finds that the AI ALFRED is the autopilot and reports that Matt’s voice is a 93.7% match with Terry’s. And he orders the plane to go to Blackgate.

Spellbinder continuing to hold Terry in his power saying that Batman’s costume is the only thing that will keep him alive. He told Terry that his heart is damaged and he needs an external power source to keep him alive, and the Batsuit can provide that power. Terry attacks Tim with the intent to kill him with Barbara and Spellbinder watching on. Next issue the end!.

This is a great issue. I thoroughly enjoy the pay off of this issue. We get a more accurate story from Spellbinder this time that the battle was not Rewire but Terry as Batman. The only explanation for Terry being alive is a change in the time line which has some logic to it in that Tim did tweak the timeline when Brother Eye was coming to power but I think there needs to be a little more thought about how this can affect the survival of Terry as well as how did Tim get the Bat suit.

It was interesting that the signal over Blackgate that lures Batman there looks like the Red Robin symbol. If I am wrong, please let me know.

The action here is terrific. It is engaging and the interplay with Matt and Tim is amusing, giving the reader some comic relief in an all action issue. I really want to find out what happens next as I know that in the end Terry will become Batman Beyond again, I am interested in where this will leave Tim Drake. The reveals are great, the action is great even though the explanation is a little weak.