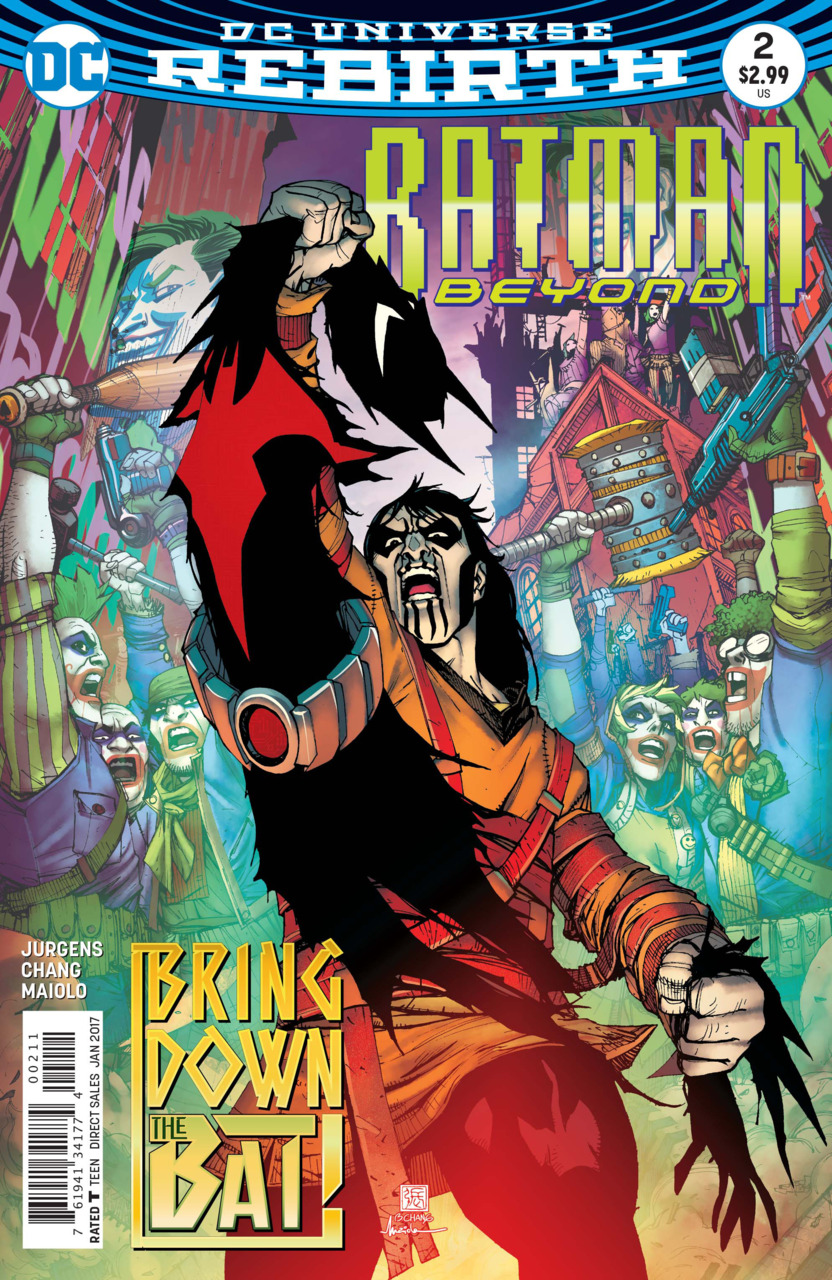 “Escaping the Grave: Undercover” continues the conversation of Terminal and the captive Dana. Terminal is working on reviving the dead Joker. Dana insists that reviving the long dead Joker is impossible while Terminal only recounts that it is possible since Superman died and returned from the grave. Dana insists that the body in the other room cannot be the real Joker, she heard the story. Terminal counters with his own version of the story of the death of the Joker.

Bruce Wayne is chained to the front of a snow plow in the middle of a blizzard. Joker had set a dirty bomb in Gotham and Batman was trying to stop it. Joker is behind the controls of the plow with the intent to crush Batman between it and an out of service bus. Batman intentionally breaks several bones in his hand to attempt an escape. Barbara Gordon arrives on the scene but she is not able to get a clear shot at the Joker. Batman yells at Barbara to move as the Joker plows into Barbara’s cruiser, but Batman is able to free himself and he tackles Barbara and pushes her out of the way. Batman fires his grapple at the plow while Joker attempts to shoot him. Batman eludes the shots and grabs the captive plow operator and throws him clear. Batman kicks Joker through the windshield. The struggle continues until the Joker is unconscious and Batman retrieves the detonator to the bomb. Batman pulls Joker back into the cab and escapes the vehicle as it approaches the giant spinning fan of a train’s snow blower. The plow hits and and the snowblower chews into the engine and cab leaving twisted metal and pieces of human remains making the world conclude that the Joker was dead. Dana insists that the tissue and blood left behind were tested as belonging to the Joker. Terminal retorts that the wounded and near dead Joker escaped the cab and was picked up by his crew without the knowledge of Batman. The gang was able to get Joker into a cryogenic chamber before we succumbed to his injuries until Terminal found him years later. The story and conversation is interrupted by a report that Batman is attacking.

The Jokerz open fire on the Batmobile. We see that Max and Matt are actually inside of the vehicle. Matt gets word that Terry is in position, Max who is at the controls turns the Batmobile back to the Jokerz. The Bane Jokerz from the previous issue grabs a couple of air conditioner units and hurls them at the approaching Batmobile. Max is able to evade the attack but just barely. The units damage the windshield. Terminal holds a gun to Dana and orders the Batmobile to leave. We hear a voice behind Terminal ask if he is just letting Batman go? We see that it is Terry in disguise and he is holding a bazooka. Terry targets the Batmobile and fires. Matt activates a fireworks package that makes it look like the shot hits the Batmobile. A second “package” which is a sphere is dropped making it look like the vehicle was shot down. Terminal says that it could not have been that easy. Batman may have bailed. Terry helps the hulking Jokerz up and identifies himself as a friend who wants to join the party. His back story is that he was in criminal modification therapy and now that he is out he wants to join the gang. Terry identifies himself as Trey Malone the son of Matches Malone. While this conversation is going on, Dana identifies Trey Malone as Terry McGinnis by his voice. She believed Terry to be dead. Next issue Revelations!

This issue has two goals. The first goal is to give the story of the death of the Joker and and the second goal is to push the story forward. I believe both is effectively done. The flashback is quick and to the point. We only get what exposition on what we need to know and the point of the flashback is shown in the art and dialog of the time. Terminal’s voice overs only give us quick exposition to understand what the public believed to be true and what actually happened and how he was able to get possession of the Joker’s body.

The second part is actually getting Terry inside the Jokerz gang. We see how quickly Max, Matt, and Terry are able to get the plan together and they are able to execute it perfectly and we get a mini cliff hanger that Dana recognizes Terry’s voice but by the look of her face, granted we only get a quarter shot, she does not look too happy about Terry’s return as she is gritting her teeth. Just by this panel, I want to see where this is going, and what really happened between Terry and Dana.

I liked the callback to Matches Malone when Terry identifies himself as his son Trey.