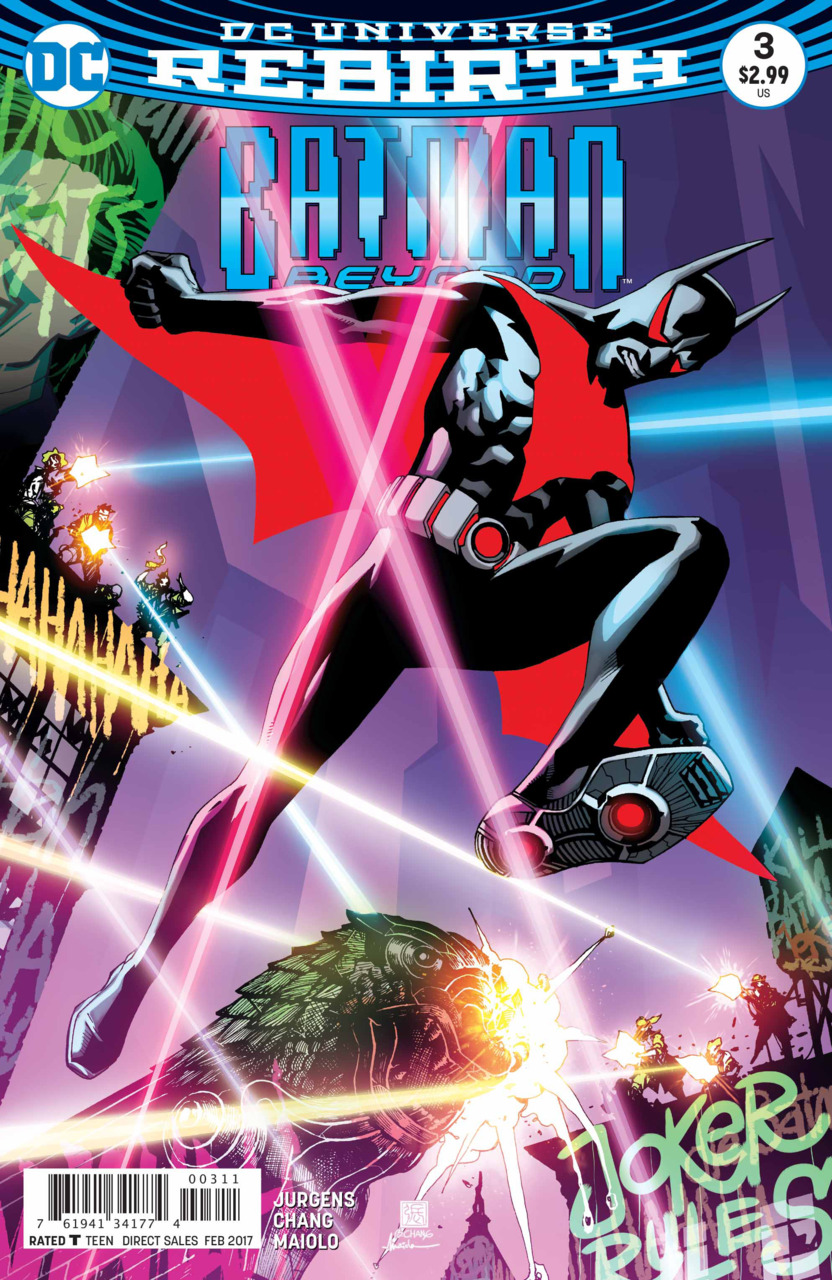 “Escaping the Grave: Revelations” opens in the Batcave. Matt and Max are exiting the damaged Batmobile. They are trying to establish a video link with Terry, but after all he does not have the Batsuit. The Batsuit however will not provide much help as it is shredded beyond Max’s ability to repair it. Matt suggests that they tap into the computer for a possible weapons log. Max sees something else that we do not see.

At the Jokerz layer, we get a voice over from Dana recapping the readers of the previous two issues including that she knows that Malone is really Terry McGinnis. While this is going on, Terry continues to try to persuade the Jokerz that he just wants to be one of them. Dana however does not know how Terry came back from the dead or even whose side he is on now. While the gang debates Terry’s fate, Dana sneaks away in hopes of escaping. The big Jokerz notices that Dana is missing and starts to follow when Terry says that he’s got this. Terminal sends all the Jokerz out into the street to hunt down Dana.

Terry quickly runs into Dana and she reveals that she knows who he is. Terry gets her to quiet down and play along so he can get them both out alive. The other Jokerz catch up and Terry throws Dana into them as they say that they need to kill her. Terry suggests that maybe they should check with Terminal first and they bring her back. Terminal tells Terry to take her upstairs and make sure that she cannot escape again. Terry takes her up and we get a panel of a Terminal looking like he suspects something.

Once upstairs the two talk more freely. He insists that he is not flying solo on this one and he will explain everything later.

Outside Jokerz Town, Max and Matt start hatching their plan. They have a package and Matt thinks that he can get in the easiest. Once Max goes in, the Jokerz will be all over her. The two hug and Matt goes over a roof while Max provides a distraction for the Jokerz on the street. Matt is right as soon as Max enters the Jokerz are all over her.

Back with Terry and Dana, Dana shows Terry the body of the “Joker” and tells him Terminal’s plan to resurrect him. Terminal and the other Jokerz arrive and Terminal reveals that he also knows that Malone is really Terry. Terminal however does not know what Terry is really up to. Terry says that he is the guy who is going to stop him. After a brief struggle, both Dana and Terry are grabbed and taken to the wall.

Meanwhile Max is in contact with Matt. He is trying to be quiet as he does not know who he will run into. A couple approach him and Matt uses a flash bang to get away. Matt soon gets to the wall and sees that Dana and Terry are strung up upside down and the Jokerz are down below with acid filled pebbles and rubber band shooters. They are shooting the pebbles at them and Terry does what he can to shield Dana. Matt has to get his backpack up to Terry or he is a goner.

Terminal goes in the chamber where the “Joker” is being kept. He puts a pad under “Joker’s” hand revealing that the body is neither dead or the Joker. The man is drugged out of his mind and he is unable to talk. While Terminal talks about supplying a painted up coma induced stand in for the Jokerz to worship as their guru, Terminal accesses banking accounts, transferring funds into his own account. It is revealed that Terminal really has Bruce Wayne and he knows that it is Bruce. Terminal is using Bruce to take the world. Next issue Death and Life.

This issue progresses the story nicely. Dana knows that Malone is Terry and she is not the only one. Terminal is depicted here not as an idiotic Jokerz gang member that we have seen in the past but instead with real intelligence and a plan. He recognizes Terry’s voice despite the fact that Dana notes Terry is trying to mask his voice.

My guess is that the package is the newly repaired Batsuit, I am just unsure how Max was able to repair it as she says that Bruce’s tech was beyond her abilities.

I like that Terry has a supporting cast that is not just the people he needs to rescue. As in the previous issue, we see them actively helping Terry and in this issue Terry is the one in trouble and in need of help from his friends.

The final reveal that the “Joker” that Terminal has is really Bruce Wayne and that he knows it is Bruce and is in essence stealing Bruce’s money was surprising for me. I like to know how this transpired..

Overall, there is not a lot of action, but the story does progress and that I think is a positive move.