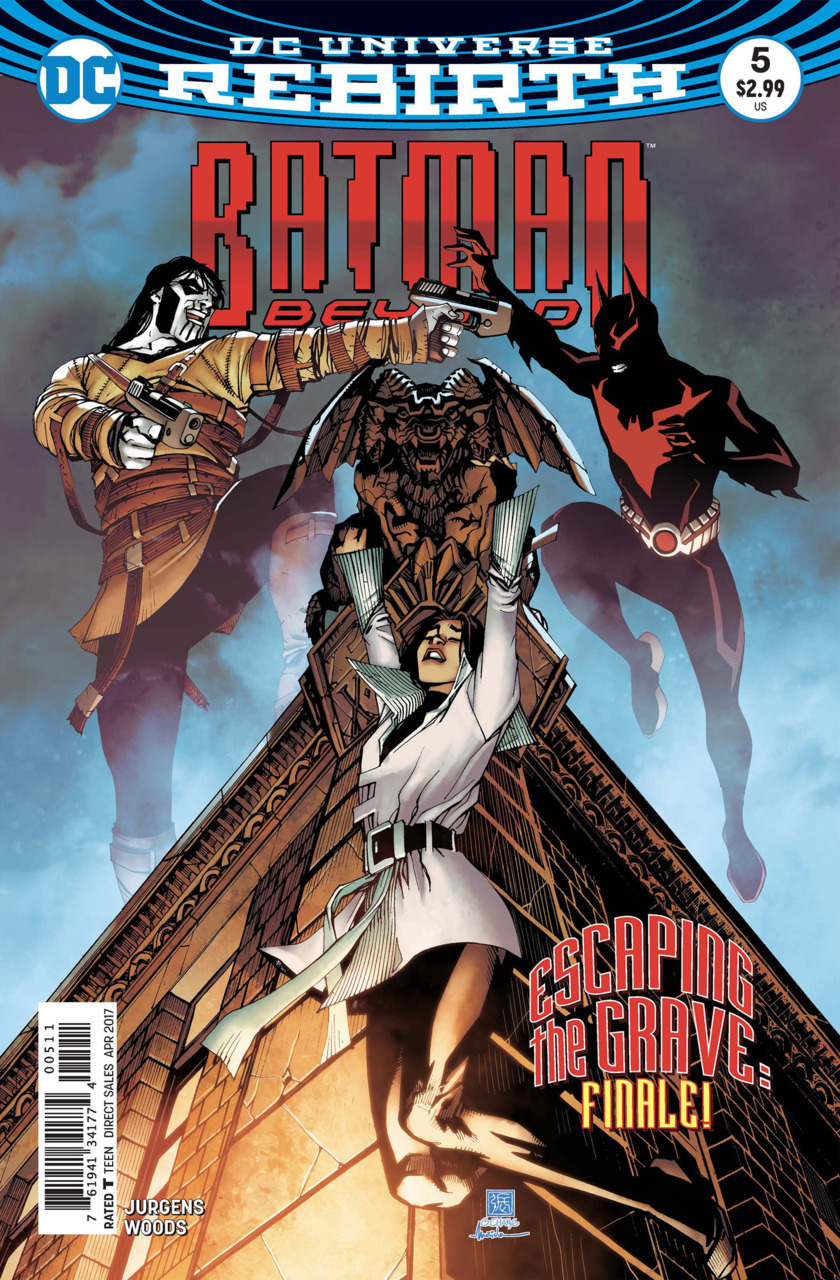 “Escaping the Grave: Moment of Truth” begins decades from now. Batman is flying over the skies of Gotham with the new realization that Bruce Wayne is alive after thinking he died in the Brother Eye attacks. We see a flashback of Bruce Wayne in a Wayne-Powers monitor installation. Batman meanwhile was fighting in the streets but as usual, he was in communication with Wayne. Brother Eye attacked the installation with Bruce Wayne still inside. Bruce realizing it was over for him tells Terry that he was the last hope for victory. The installation was destroyed. Batman arrived at the site to find nothing but incinerated rubble and the ID badge of Bruce Wayne. Wayne was presumed dead. A day or two days later, Spellbinder took Batman off the board and no one else made sure that the dead were really dead.

Max and Matt are on the roofs in communication with Batman. Max was able to tap into the flight tracker’s log of everything flying over Gotham and she found a small transport that left “No Laughing Matter” seventeen minutes earlier. That transport went strait to the Wayne-Powers building. Batman believing that Bruce is with Terminal arrives at the building. He surmises that Terminal is after Keystone but nobody is supposed to know about it. Batman activates the security access from the roof. We hear from Terry’s voice over that Keystone is the world’s ultimate intel gathering device. It is Terminal’s knowledge of Keystone that is keeping Bruce alive and why they are at the Wayne-Powers building.

Inside, Terminal and the janitor take Bruce still made up as the Joker out. Terminal explains that they are on the cusp of a more rewarding goal than the resurrection of the Joker. Terminal berates the janitor accusing him of being a simpleton and describes Keystone as his true intention. Terminal further explains that their patient is the ticket to Keystone. With Keystone, the world is at his fingertips. Terminal now reveals that the patient is not the Joker but is instead Bruce Wayne and he used the lie that he was working to resurrect the Joker as the pretense to get Terminal to convince the Jokerz to get everything he needed to keep Wayne alive. Terminal admits that he had no intention of bring the Joker back to life, the world is far better without him.

Terminal recounts the initial Brother Eye attacks. Triage tents were erected to handle the casualties. Everything was so fast that there was no time to take names. Bruce Wayne was in one of these tents and nobody recognized him so they passed him by. Terminal however did recognize him and spirited him away. Keeping the man alive required substantial resources so Terminal concocted the story that he had the Joker and was trying to bring him back so the Jokerz gang willingly supplied all the resources Terminal needed to keep Bruce Wayne alive.

Terminal uses a voice modulator to mimic Bruce Wayne’s voice. With the voice, Bruce’s handprint and retina scan, he gains access to the room housing Keystone. Instead Terminal and the janitor are now face to face with Batman. He attacks but Terminal uses electrical belts to temporarily stun him. With Batman out he pulls the respirator from Bruce and wakes him up saying that he wants him to see what is happening. Terminal now lunges for Keystone but is stopped by a now recovered Batman, calling Terminal inhuman for keeping Bruce drugged and alive. The janitor makes a peculiar comment about the real Batman knowing a good joke, calling Terry a cheap imposter. This confuses Terry who sees the janitor with Bruce’s hover chair. He is going to push him out of the hanger door. Bruce meanwhile is starting to recognize the janitor’s voice but Bruce is pushed over the edge. Batman jumps out to save Wayne. This distraction allows Terminal and the janitor to return to the transport and take off as Batman grabs Bruce’s chair. Bruce tells Terry to leave him and as usual one of Bruce Wayne’s allies refuse to listen to him.

Max and Matt get a bead on the transport and fire a bazooka to stop them. Matt hits the target, the transport stays airborne but as Max says not for long. Batman gets Bruce back inside the building and asks if he is okay. Bruce says that physically he is fine and tells Batman to go after Terminal. Terry removes his mask and tells Wayne that Terminal can wait, now he needs to take care of Bruce. Bruce tries to tell Terry something.

This was a good, but not great issue. The final reveal of the Joker was extremely satisfying for this fan who does not consider the Joker his favorite villain. It was great to see Terminal berate and demean the man he thought was only his janitor. That makes the reveal that he was with the living Joker all the more satisfying.

With that said this issue proved to be an exposition issue with very little action. We get the Batman flashback of the supposed death of Bruce Wayne and the Terminal flashback of his finding the gravely injured Bruce Wayne. We get exposition on Keystone and I am not sure if we will ever really know what it is and why Terminal wanted it so badly. The current action was minimal and the Batman fights were rushed and abbreviated.

I like character development but my ideal comic has action and character development. Cool down issues between arcs are welcome to me sometimes if we focus on characters as a time to cool down from the heavy action and take a breather with characters. To have this type of issue as the end of an arc I find very unsatisfying. I want to see action where the heroes finally can get the upper hand and this ending was rushed in favor of developing the idea that the janitor was the Joker all along, a character that I only noticed in the last issue and with so few appearances of him all of the clues to his true identity I only see in this issue.

It was a satisfying issue story wise, but it was not so much fun for a comic book. It was good, but disappointingly, it was not a wow overall.