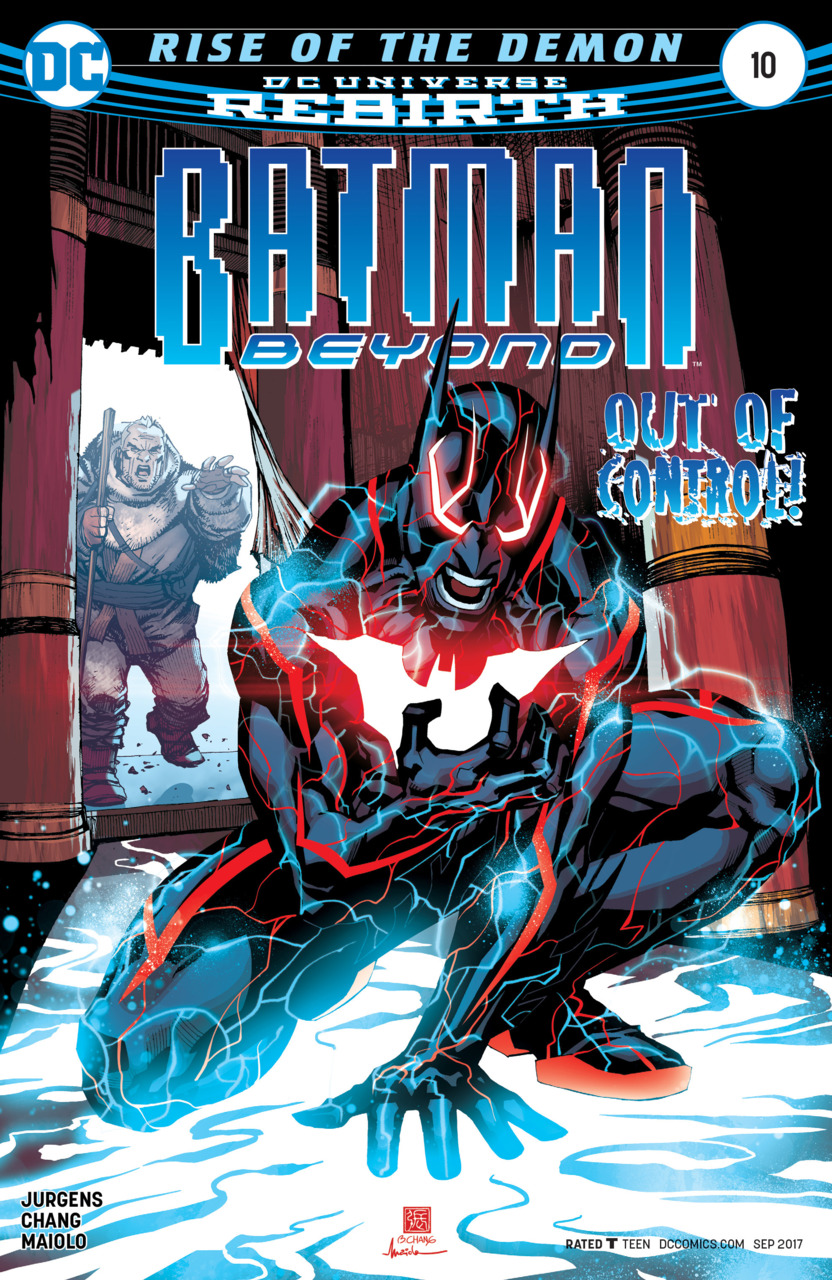 (Spoilers ahead) The issue opens with Bruce’s memories of his son, Damian. He remembers his first meeting with the boy, His affair with Talia, Damian’s mother, and his upbringing under his grandfather, Ra’s Al Ghul. Bruce recounts Damian becoming Robin and him trying out the prototype bat suit, and his disappearance after that.

In the present, Damian stands over the fallen Terry McGinnis with his sword in his hand. Bruce shouts at Damian and the sword is thrust into the snow next to Terry’s head. Damian tells Bruce that he would never kill a compromised and weak opponent. Bruce does not know that Damian would not kill. Bruce feels that he barely knows his son at all. Damian appears to be wounded that Bruce never came looking for him, but he did come for the “pretender” as he puts it. Bruce reminds Damian that he was held captive by Terminal, but Damian had knowledge of Bruce’s accounts. As long as money stayed in his accounts, Damian knew that Bruce was still alive. We see the Demon’s soldiers step up out of the snow drifts and Batman starts to stir. The suit reboots his system to filter the sonic interference. Terry tackles Damian from behind pushing both into a snow drift. Bruce muses that the only way for Terry to win is if Damian makes a mistake which is very unlikely.

Terry and Damian restart their fight with Damian blocking Terry’s batarangs with his sword. Damian hits Terry’s belt compromising his power conduits. Meanwhile the Demon soldiers grab Bruce while the fight with Terry and Damian continues. Bruce notices that Damian has gotten better than the last time he saw him. In fact Damian has surpassed Bruce when he was at his best. Bruce also notices the suits A.I. starting to take over. Damian notices that Terry has completely given over to the suit and calls for his old friend. Goliath, Damian’s were-bat attacks Terry from behind. Goliath grabs Terry by his head and smashes him into the snow. Bruce asks why Damian orchestrated this situation.

Bruce and Damian start their conversation. Damian tells Bruce that the suit did not make him leave, he wanted to leave on his own. Damian did return, but saw Bruce with Terry and he believed that Bruce replaced him. Damian accuses Bruce of giving up looking for him. Damian however started to see the vision of Ra’s . Ra’s asked Damian to join him. He needed an heir because he could no longer use the Lazarus pits to regenerate himself. Ra’s for his part noticed Brother Eye and knew that it would lead to destruction. To combat Brother Eye, the League of Assassins needed to prepare. Damian prepared by converting Ra’s’s enclave into one reflecting the modern world. He outfitted it base with the most advanced tech available. The League hid and waited. During this period of hiding, Ra’s Al Ghul passed for the final time. During the funeral, Brother Eye invaded Earth with its hoards of cyborgs. Damian watched knowing that Earth was dying, he began to believe that reconfiguration was the only answer and showed Bruce his silos of missiles. Bruce breaks free and grabs Damian. Goliath steps between them and pushes Bruce back.

Batman is able to climb on top of Goliath and strangles him to death with a heavy chain. Batman with a maniacal smile on his face says that it is Damian Wayne’s turn.

We get the exposition of why Damian turned on Bruce in this issue. He claims that it was not the suit that changed him but he realized the truth in his Grandfather’s beliefs.

The story itself was so so at best. The exposition just dragged on and I wanted to see more action. I am beginning to believe that comics these days are better written for the trade format. This might not have dragged mixed in to the action from last issue and what I assume to be the action in next issue.

The art I feel was effective. I particularly liked the change in the art using warmer colors to denote the flashback scenes to the crisp colors if the real time action. I thought that the look on Batman’s face at the end really shows that the suit may have taken Terry completely over.

Overall, it was okay. The story was slow, but the art was pleasing to look at.