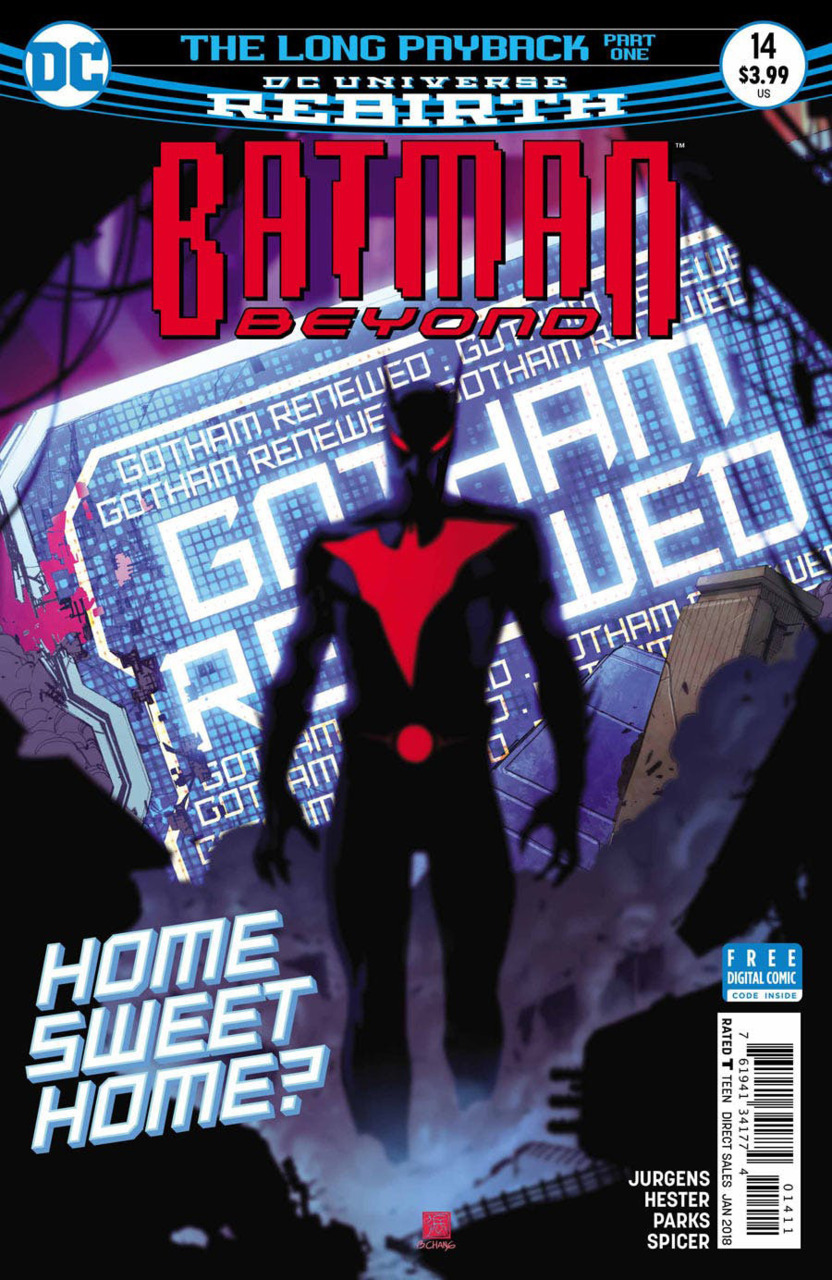 Overview: After returning from their adventures outside the country, Terry adjusts to life back in Neo Gotham. His triumphant return as both Terry and Batman comes to a halt when the Royal Flush Gang seemingly break his back.

Synopsis (spoilers ahead): Opening in Neo-Gotham, a mysterious hooded figure addresses the Royal Flush Gang. It appears that he has enlisted their help in drawing Batman out into the open. Despite some insults from their mystery benefactor, the gang agrees to continue working to get Batman.

Back at Wayne Manor, Terry and Bruce are dropped off by an ambulance following their mission against the League of Assassins. They are accompanied by Terry’s brother Matt and, much to Bruce’s frustration, they inform him that they will be assisting him in his recovery. Wayne begrudgingly agrees and even tells the brothers that they can stay in the manor. Getting down to business once in the cave, Terry tells Bruce that he is committed to staying Batman. Bruce tells Terry that he made some modifications to the suit, namely removing the dangerous A.I. system. Terry tells Bruce he has to go see someone before patrolling.

At the gym, Dana is finishing a workout when Terry shows up to make amends. He confesses to her that he will remain being Batman, but that he still wants her in his life. She agrees to try if he is willing to try.

Back in the cave, Bruce is teleconferencing with Barbara Gordon and she admits that she’s happy he is confined to a wheelchair temporarily so that he might take it easy. She warns him that this life can always lead to this outcome. Bruce brushes her advice off and finishes his modifications to the bat suit and then sends it to Terry so he can go fight the Royal Flush Gang.

Despite having a romantic evening stalled by Bruce’s drone, Terry suits up and takes on the Royal Flush Gang. The fight ends poorly as the muscle of the gang, Ace, gets a hold of Terry and seemingly breaks his back as Bruce and Matt watch.

Analysis: After the last two disappointing issues, it feels like the title is headed back in the right direction. Jurgens introduces the set up to a futuristic Knightfall storyline. It does not feel as earned as the original did, given the fact that Terry just does not have the years under his belt to merit this “shocking” defeat. That being said, this arc will undoubtedly help grow Terry’s character if he has to fight to regain his strength and become Batman once again after a major defeat. For Bruce, this arc could potentially help him confront the issue that Barbara hints at with putting too many people down the dangerous path that he has tried to follow all his life.

One of the main negatives with this issue was the artwork. I found myself surprised at how nondescript the faces were on the characters. It was hard to distinguish characters from one another unless they were men or women. Hopefully, Hester can elevate his line work to bring more detail to the panels of future issues. I will say it was good to see the original design of the Batman Beyond suit in this issue with the white eye lenses.

Final Thoughts: Overall, this first issue shows promise of a potentially great character development story for Terry rebuilding himself into a far more seasoned Batman as well as Bruce confronting some of his inner demons and potential regrets. Despite the twist not feeling earned and the less than satisfactory artwork, I am looking forward to seeing what the creative team brings next.