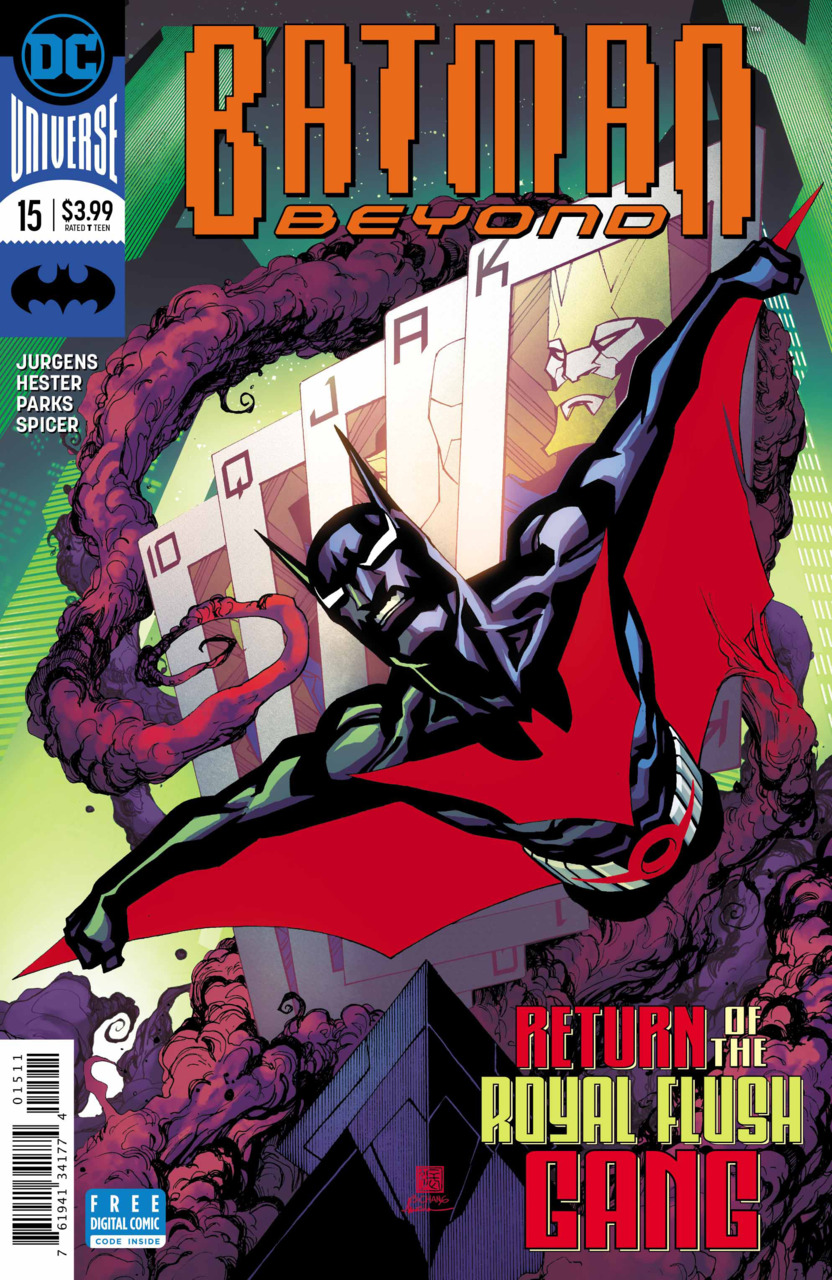 Overview: After defeating the Royal Flush Gang, Terry tries to have a quiet night with Dana when another villain from his past, Stalker, returns at the request of a mysterious figure to defeat Batman.

Synopsis (spoilers ahead): Just after Ace seemingly “breaks” Terry’s back, Terry reveals that his suit was able to take the impact. Bruce informs Barb as he is watching that he learned from the mistakes of his past with Bane. Terry is able to make quick work of the rest of the Royal Flush Gang without their heavy hitter, Ace, after Terry destroys the android. As the police pick up the gang, Terry makes a joke to Bruce and heads out to continue patrolling the city.

Meanwhile overlooking the crime scene, two hooded figures discuss the one’s use of the Royal Flush Gang as an ineffectual use of resources. The main stranger admits that he knew the gang would fail but their purpose to show Batman’s potential improvements and flaws. The hired hooded figure turns out to be an older villain-turned-freedom fighter Stalker. It appears that he is the final solution to take down Batman for the hooded figure.

Back at Wayne Manor, Terry’s brother Matt is watching old training videos of Bruce and Damian. In Terry’s room, however, a masked intruder searches the room until she finds a photo of Terry. She recognizes him immediately. Bruce and Matt see the intruder alert and Matt attempts to catch her but she is able to sneak by him.

In Gotham, Terry visits Dana in full uniform. He asks her out on a date which she accepts as long as he takes off the uniform. The date is cut short, however, when Stalker attacks Batman. The issue ends with Batman and Dana in a free fall after Stalker is forced to release her over the rooftops of Gotham.

Analysis: After ending last issue on a cliffhanger and the potential breaking of Terry’s back, it appears that it was all pretty pointless with a causal mention from Bruce that he never planned for the mistake he made with Bane to happen again. It was very disappointing to me to find out that the tension built up in the last few issues of a more arrogant Terry being brought down a few pegs is not happening. I have been wanting to see Terry becoming more mature as he was in the Future’s End storyline. This arc does not seem to be doing that so I only hope that they will eventually tackle a bigger issue in this title than just the occasional recurring villain from Terry’s past.

The artwork in the issue was nothing vastly different than what we have seen prior in the title. Phil Hester’s pencil work captures the action well enough, but doesn’t really go deeper than that. Between Michael Spicer’s colors and Phil Hester’s pencil work, the most interesting panels were in the first two pages with Bruce seeing his own memory of Bane breaking his back meld into Terry with Ace. Seeing it all through the reflection of Bruce’s eye was very insightful and an intriguing look.

Final Thoughts: Overall, the issue did not carry any tension through from the previous one. Dialogue and artwork aren’t enough to balance out the issue to make the story engaging going forward. Hopefully, the creative team will take Stalker and make him a compelling villain in service to a greater threat. The hidden figure could prove to be an interesting plot twist if handled correctly but, thus far, I do not find myself caring much for who it could be at this point in the story.