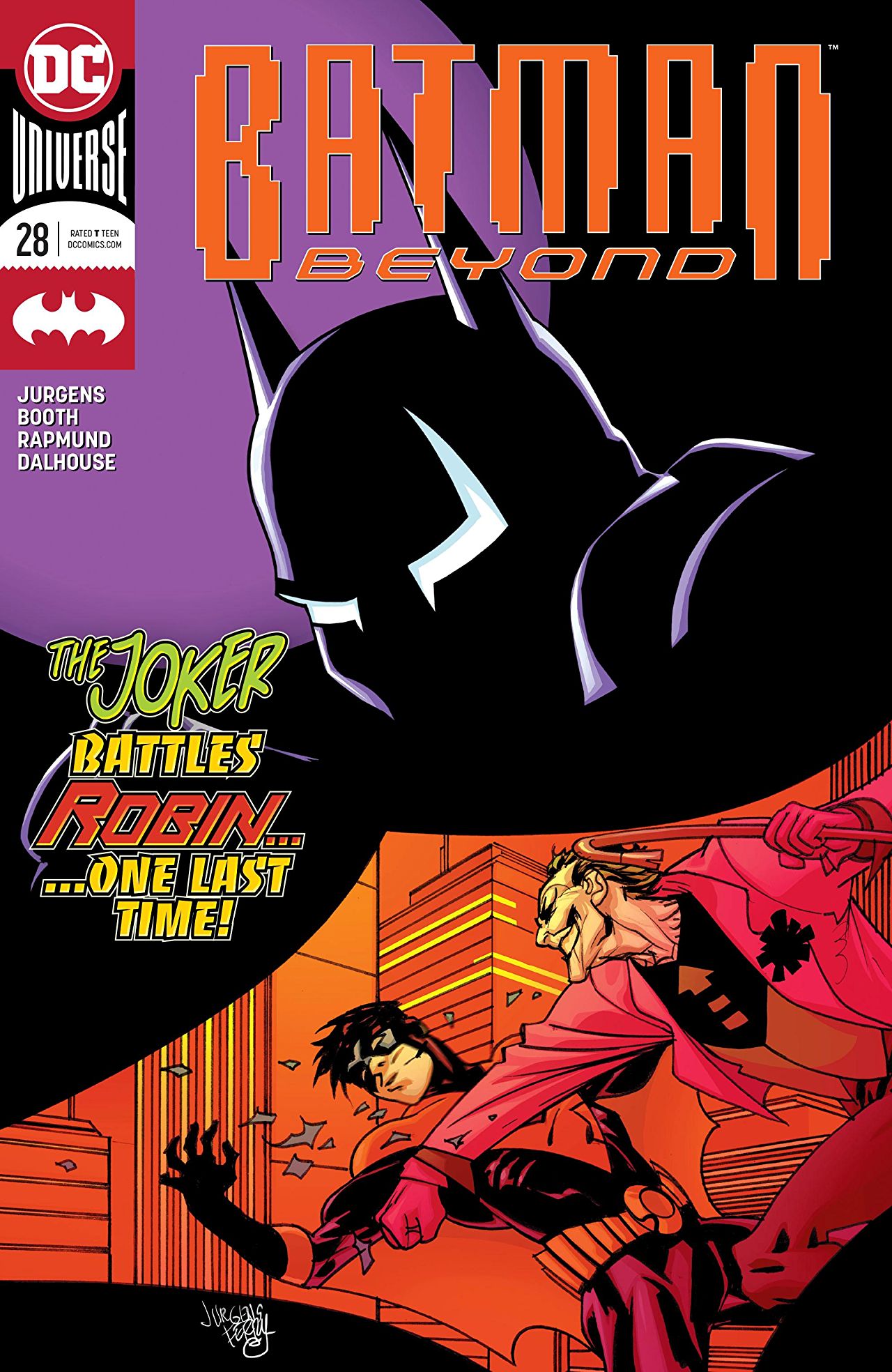 Overview: While Batman continues to fight the Joker Cyborg, Robin is captured by the real Joker.

Synopsis (spoilers ahead): Picking up after the Joker’s cyborg reveal, Batman and Robin become entrenched in a fight with the mechanical monstrosity fused with a dead joker gang member. Even with direct communication with Bruce and Grayson, the new dynamic duo are struggling to combat this futuristic monster. After numerous attempts trying out different levels of explosives, the pair is split up when Robin gets hit by an energy blast from the cyborg. Terry is unable to get to him being attached himself by the cyborg.

Back in the Batcave, Dick argues that he was right about Matt not being ready to be Robin. Falling from the sky, Matt is able to maneuver in such a way as to save himself in the fall. The victory is short lived as the real Joker is there to take Robin prisoner.

Meanwhile, Terry pulls out a few moves to try and incapacitate the “Joker Beyond” but is still falling short of defeating it completely. However, he is aided by Grayson in the Batmobile. On the screen, Joker asks if Batman actually feels like he is winning. Terry feels that he has but Joker reveals that he is going to detonate bombs across Gotham. He explains that the people of Gotham’s lower level have been needing him to return so as to bring some equality to the city. He states that he also will not be killing Robin until he finds out more about the man named “Bruce” he overheard the team talking to during the battle.

Analysis: Yet another issue goes by and it still feels like the car is accelerating at top speed. Pretty much every issue of this arc has been over the course of a day or so with nonstop action. The action certainly has its place and it is being done well here by the art team, led by Brett Booth. That being said, we still have unanswered questions without any attempt at trying to answer them.

It would be nicer if we could slow things down to have the Bat-Family do some detective work to try and work out who this Joker is and if he is the real one. The fact that we have a Joker who does not know who Bruce is seems to point to the fact this is not the real Joker as the one from New 52 continuity knows about Batman’s identity currently. This could be interesting as they could be utilizing a different Joker altogether or its an imposter who has found some way to become like the Joker almost perfectly.

With the next issue presumably showing Terry needing to find Matt, it’s possible the team has to do some work to uncover this Joker and find out where he might be hiding This could also open the possibility of a slower issue to discuss the motives of the Joker to bring everyone in Gotham down to the same level (critique of social classes) which could make for some interesting perspective points both within the Bat-Family and even with the Joker.

Final Thoughts: Overall, the issue was not bad but we are at a point where I hope the story takes a breath and tries to dive into some deeper themes of the arc that have been hinted at. Whether its the upper class needing to be in better touch with the rest of Gotham’s society or the Bruce/Dick argument over the role of Robin in the Bat-Family, the next issue will hopefully take a moment to explore them.