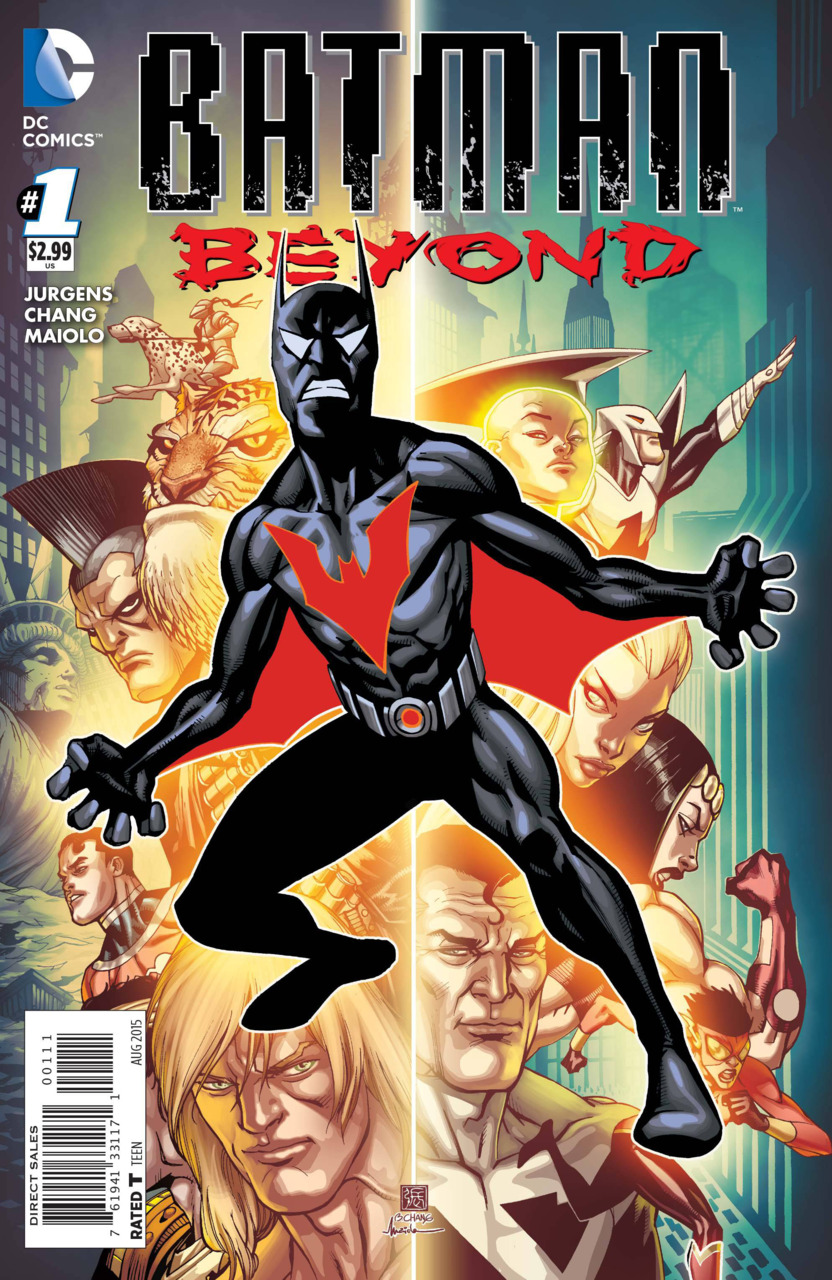 Editor’s Note: Please note that in addition to Issue #1 this reviewer also talks about the 8-Page Preview of “Batman Beyond” seen in the “Convergence” titles during the month of May

We open the sneak peak issue, “Beyond Recognition” with Batman Beyond flying through the sky of Neo Gotham. Batman and his AI, A.L.F.R.E.D. are tracking something. It is revealed that they are tracking a giant robotic monster. Batman moves in to attack the monster as it attacks civilians in the area. As Batman fights we hear Brother Eye and the civilians both realizing that the attacker is Batman. Batman defeats the creature and we hear a voice say “Way to go Terry” A.L.FR.E.D. analyzes the voice and discovers that it is Matt McGinnis, Terry’s younger brother. Tim reveals that he is not Terry and has to tell Matt that Terry is dead. Tim says that Terry gave him the suit before he died. All Tim says afterwards is that he is far from home, not revealing that he is really from the past. Nora, who is with Matt, tells Tim that there are pockets of humanity being held captive including Max a friend of Terry’s. Tim vows to find those captives revealing Tim Drake’s mission here in this series.

“Brave New Worlds Part 1” opens with Batman attacking the Jokerz gang at the Wayne-Powers Complex for Deterrence. A.L.F.R.E.D. gives a quick explanation as to what the Jokerz gang is in Neo Gotham. The Jokerz are here to destroy the Veil Technology housed in the complex. This technology is allowing Gotham to be cloaked from Brother Eye. It also has the capability to scramble Brother Eye’s data and detection systems so it appears that the location of Gotham is constantly changing. A female member of the Jokerz gang wants to destroy the veil. Her family was killed in New York and Gotham should not be privileged. Batman takes her out and retrieves the Veil and reactivates it. A.L.F.R.E.D. is trying to determine what has changed from its previous time line. Batman decides to track down some people to find out what the current condition of the world is.

Batman is on his way to talk to Nora Boxer and Matt McGinnis from the sneak peak issue. Nora worked at the Global Peace Agency where she met Matt while he was on a class field trip. The attacks started and Matt who already lost his father lost his mother when she went missing during the attacks. Nora took Matt in and watched him when Terry was not around. Nora says that Max Gibson, Terry’s friend along with others are being held in a place called The Lodge. It is a P.O.W. camp set behind a toxic region that cannot be reached unprotected. Tim believes that his suit can provide the protection he needs to get in. Eye is holding them to try to understand the mind of men. Nora says that the Justice League is either dead or has been turned. Batman is all that is left. Batman leaves to follow up on the lead by heading to New York. As Tim leaves, Matt says that the suit should be his.

A.L.F.R.E.D. reports that the timeline he originally left had more widespread damage and Gotham was virtually destroyed. Terry’s presence in the past altered that timeline to what we are seeing now.

Tim arrives at New York which has been destroyed. Batman finds what he believes is The Lodge. He detects something and is immediately attacked by the Superman Borg. Superman pins Batman to the ground and produces a drill to bore into his head. A.L.F.R.E.D. sets up an electrical feedback at maximum charge that disrupts the Superman’s robotic systems but in the process the A.I. shut down and Tim’s suit also shorts out and disappears. Tim decides to hide in plain sight and enter the compound. Tim finds Maxine Gibson inside but she is not alone.   Tim Drake finds himself face to face with Barbara Gordon who recognizes him as Red Robin. Next issue the Happy Place.

I really do not have a lot of thoughts about this issue since it is the first issue in this new series.

I want to start with the art. Overall I liked the art in this issue however there are several panels that have a monochromatic color scheme and I really do not know why this is done. I have seen this used in other books such as the final run of Green Lantern Corp prior to Convergence. I can find this style distracting at times and I just have to get used to it here.

Story wise, I am happy to see the story move along. I am surprised that we have found Max Gibson so quickly and I am interested in Barbara’s back story in this time as well. I am curious about Matt, I know he has to be grieving for his older brother, Terry, but I wander if he cares more for the suit and the Batman legacy than he does his own brother.

It was fun to see the Jokerz and I would like to see more exploration of this time, but I am buckled in for this ride.