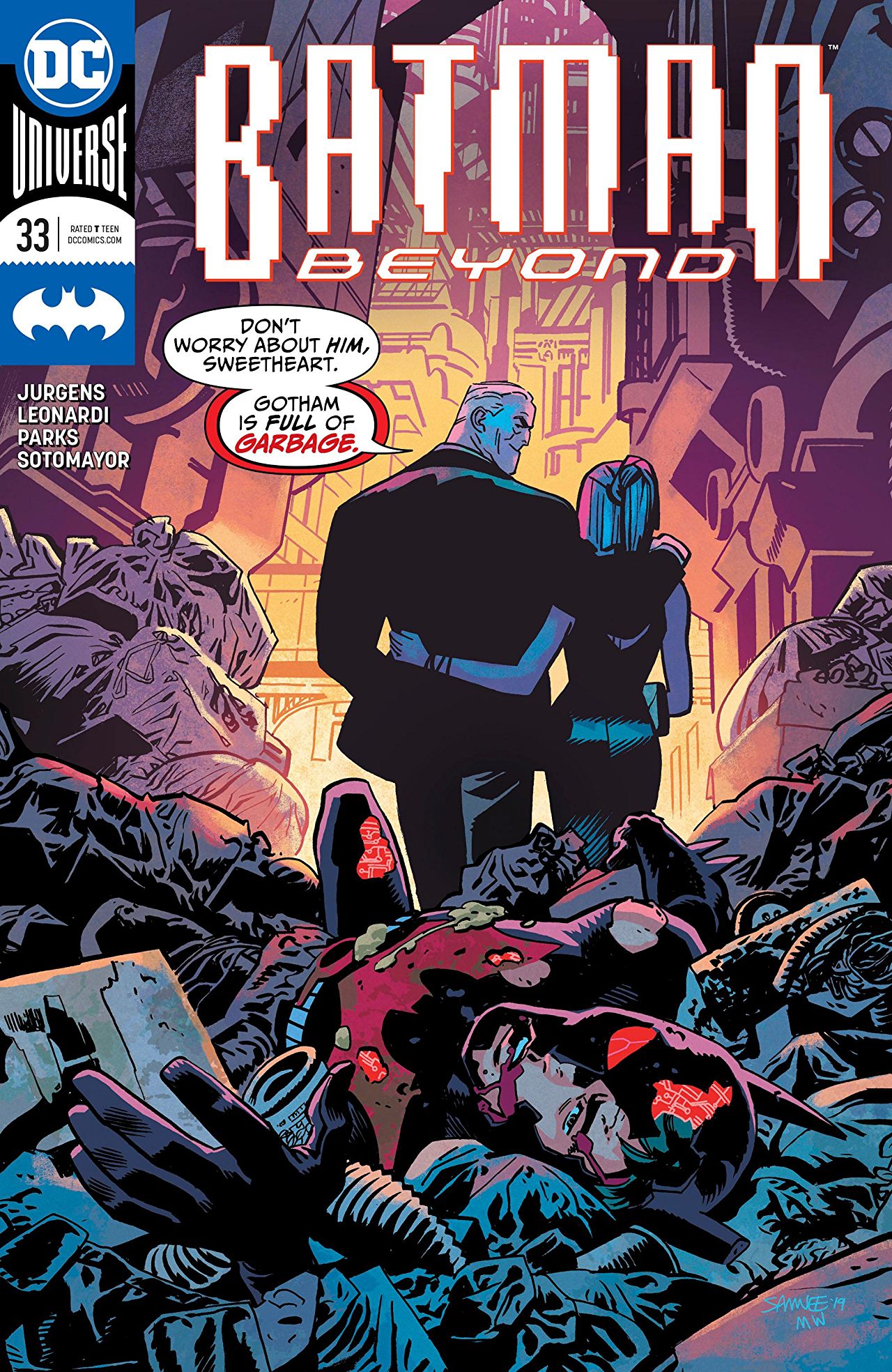 Overview: As Terry finally questions Bruce about his odd behavior, Melanie goes to Arkham to seek out her own answers.

Synopsis (spoilers ahead):  As Splitt is searching for more items to steal, Terry comes face to face with them as they are stealing a Matrix unit.  Caden hits Batman with a couple of hundred blows in a matter of seconds. Adam tells Caden to stop hitting Batman as he already has the Matrix key that they’re looking for.  In an attempt to stop Splitt, Terry throws multiple explosives, but Splitt immediately throws them back at Terry. He blocks the explosions from hitting him with his cape/wings as Splitt escapes.

Terry then asks Matt and Melanie if Bruce has any tips on how to handle Splitt.  Matt and Melanie have been watching Bruce on the Batcave computers, and they reluctantly tell Terry that Bruce is gambling at a casino.

At the casino, Bruce has proceeded to win seven million dollars and leaves with a woman.  He asks if she’d like a tour of Wayne Manor. As Melanie and Matt watch on the computers in the Batcave, they say that Bruce is acting strangely and still doesn’t see himself. Bruce also asks the girl if she’d like a tour of the “garage” which Melanie and Matt realize is the Batcave.

Bruce tells Alfred to notify the McGinnis’ to move out of Wayne Manor, and to change security codes.  As Alfred notifies Matt and Melanie the news to vacate, Melanie decides a trip to Arkham Asylum is in order to investigate if something happened there that lead to Bruce’s odd behavior.

Terry hears the news to move out and asks where Bruce is.  He then tracks down Bruce’s limo and confronts him on top of a building.  As Terry questions Bruce about his behavior, Bruce tells Alfred to block video/audio transmissions to the Batcave, so Matt can’t see or listen in. Bruce then proceeds to shoot Terry in the chest with a neural shock gun.

At Arkham, Dr. Sheehan tells Melanie that Bruce was fine when he left Arkham and proceeds to show her security camera video of his visit. The video did, however, show a brief power outage when Bruce was in front of the “guest room”. Dr. Sheehan tells Melanie that they don’t know who the person in the “guest room” is, but that he’s a killer, who’s been restrained with a straight jacket and “promethium” helmet, to inhibit his powers. Melanie decides she wants to talk to him and foolishly opens the door. The “guest” bursts out but is eventually subdued.

Terry arrives back at the Batcave  and tells Matt that Bruce shot him. He also overrides the lockout commands and they check in on Melanie. She proceeds to take the helmet off the “guest” revealing that the REAL Bruce has been locked up in Arkham and during the power outage the prisoner “False Face” assumed Bruce’s identity. She also says that when identities are switched the person whose identity was taken loses all faculties and don’t know who they are.

In one of the bad parts of town, Terry wakes up in a dark alley in street clothes not knowing who he is.

Analysis: Unfortunately, this is a prime example of “writing for the trade”.  While the issue does move some storylines forward, the constant barrage of Bruce not acting like himself or oddly is draining.

Splitt was introduced as a villain issues ago, but we still don’t know what he’s stealing parts for.  He was barely in the issue at all.

The concept of a “false face” villain that can switch identities is a neat concept, but the fact that Melanie was able to walk into Arkham Asylum and open his cell door, releasing a killer is absurd.  There’s really no way to explain how a guest would be able to release a killer. None.

The art is really good, but the size of the Bat emblem on Terry’s suit seems to vary quite a bit.

This book really is at a crossroads.  With Batman Beyond showing up soon in a Bendis book and possibly joining main DC continuity, this run is treading water.  Will it be canceled and relaunched, or just do a one-eighty and go a different direction? I guess we’ll find out in the coming months.

Final Thoughts: While the Splitt story goes almost nowhere, we do get some advancement on the Bruce/switched identity story.