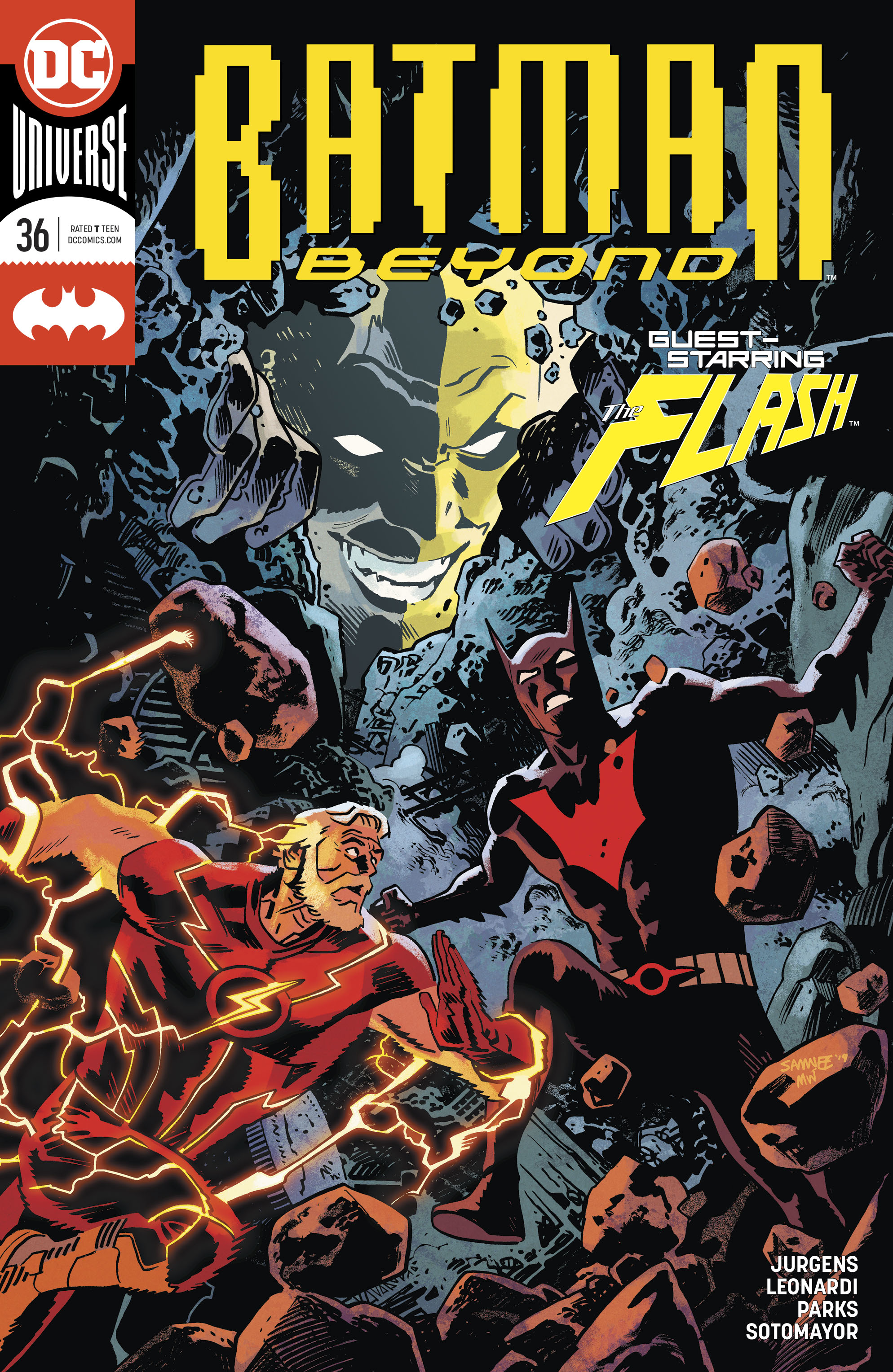 Overview: It’s the final confrontation, but not everything is resolved.

Synopsis (spoilers ahead): Decades from now, Melanie (dressed as her Royal Flush persona Ten) brings Barry Allen (the Flash) up to speed with the current situation as Splitt and False Face, who still garbed as Batman, look on. As Caden and Adam split apart to take on the two heroes, Flash directs Melanie to take out False Face while he takes on both speedsters.

We first follow the fight of the Flash and Splitt. While Barry’s age is showing in the fact that he’s not as fast as he used to be, his experience with crimefighting and the Speed Force keeps him ahead of the younger villains. But the Flash isn’t the only one slowing down; Splitt’s powers are draining the brothers’ life force, and soon they are unable to fight any longer. They explain to Barry that they are dying, and the Flash deduces that this is why they’ve been stealing power sources. After being told that they have a machine on their boat that can save them, Barry runs off carrying the weakened Splitt on his back, assured by Bruce back at the Batcave that Melanie is capable of handling False Face on her own.

And he’s right: Ten shows her own experience with fighting and the Batsuit by easily telegraphing False Face’s moves and countering him handily. The fight is interrupted, however, when False Face realizes that his allies (and future power source) are being taken away by the Flash and gives chase.

Having reached the boat, Caden and Adam explain their origin and their urgency to Barry, who explains to them that while this machine might save their lives and allow them to permanently live independent of each other, they may very well lose their speed. Caden pleads with Barry that, should only one of them be able to make it through alive, that he makes sure it’s the good one: Adam. The Flash assures them that it won’t come to that and connects the power source.

With thirty seconds left, False Face crashes in and sets to work destroying the machine. Outside, Melanie gives chase to False Face but arrives too late as the boat explodes. Hoping for survivors, she dives from her hover-card and into the waters, where she follows the signal of the Batsuit to find a roughed-up False Face unconscious and unresponsive. She pulls the body onto a nearby dock where the Flash, showing no sign of injury himself, comes to her aid and attempts to resuscitate False Face. But it’s too late. Barry declares him dead. Melanie pulls back the cowl to find that False Face still bears Terry’s face. It seems the amorphous villain truly has no face of his own.

Barry explains that he searched for Splitt, but there seems to be no trace of either Adam or Caden while, nearby and unbeknownst to our heroes, a small patch of water bubbles over.

Back at the cave, Matt wonders aloud that, with False Face dead, Terry’s memories should return. But Bruce informs him that with what he knows of False Face’s powers, as long as the villain assumes the identity of his victim, that victim will remain unaware of who he or she is. And with False Face dying as Matt’s brother, then Terry may be lost to them for good.

Later, Commissioner Barbara Gordon, assisted by the GCPD, recanvas the sea but is equally unable to find Caden or Adam. She explains to Ten and the Flash that she’s also worried about Terry, who is now not only lost in the city as well as to himself, but is also a murder suspect. Without his memories and a moral anchor, the empty vessel that is now Terry McGuiness can be capable of anything. Not too far off, a foreboding scene takes place as a phosphorescent hand emerges menacingly from the unnoticed patch of water.

Elsewhere in Gotham, a homeless man who we might recognize as Terry McGuiness is confronted by a homeless woman, protective of her ‘turf’ of a nearby restaurant’s dumpster. Unfazed, Terry uses muscle memory to leap inside and snatch some food and, in just a few seconds, slips back out with a sandwich for each of them. With the backdrop of a missing Batman, the homeless woman walks off with her new sidekick, a promising endeavor.

Hours later, the Batcave is abandoned for the night. A hooded figure enters, relieved that Bruce Wayne is finally asleep. The figure stands in front of the display case of the Batman suit, deliberates that neo-Gotham is unprotected as long as there is no Batman, then opens the case and dons the suit before heading out.

Analysis: Our story of false faces and split personalities ends as explosively metaphorically for us as it does quite literally for the villains of the book, and every loose end we expected to be tied up has instead become frayed. False Face is dead, but did he lose? With the revelation that he died wearing the stolen psyche of his latest victim, the real Terry McGuiness seems doomed to wander around with permanent amnesia, and his team has no way to contact him, let alone help him. It now seems we will have a new person in the Batsuit, but without Bruce’s permission and know-how, is the city really protected?

We don’t get any closure on the story of Caden and Adam, the brothers who literally can’t live without each other. We know better than to assume anyone is dead if there are no bodies found, so what’s left for us to wonder is if the two were able to successfully split for good, or if the interrupted experiment ended with them somehow worse.

And from the depths of these murky waters, has Derek Powers returned to be a Blight to the city and the Batman?

Jurgens continues his use of contrasted symmetry in this issue and shows us that he knows where he’s going with this throughline. Melanie, the hero in villain’s garb, takes on False Face, the villain dressed as a hero. The Flash, though mellowed with age, uses his singular focus to not only combat the two desperate and dying brothers, but also to know the difference between crimefighting and saving lives.

This final issue has the feel of a noir movie to me. It seems no one’s really any better at the end than they were at the beginning. The Flash tried to save the young speedsters. Bruce and Mel tried to recover Batman. They didn’t really succeed at either attempt. Neo Gotham may have been saved, but there is little to celebrate as a tense cloud of unease blankets the victory.

Final Thoughts: It’s an unsatisfying ending, but it seems clear that it’s supposed to be that way. The creative team is setting up the next story and allowing themselves more room to expand upon several of these unresolved issues. I really appreciate the storytelling I’ve been getting out of these last few issues and the styles that are developing.