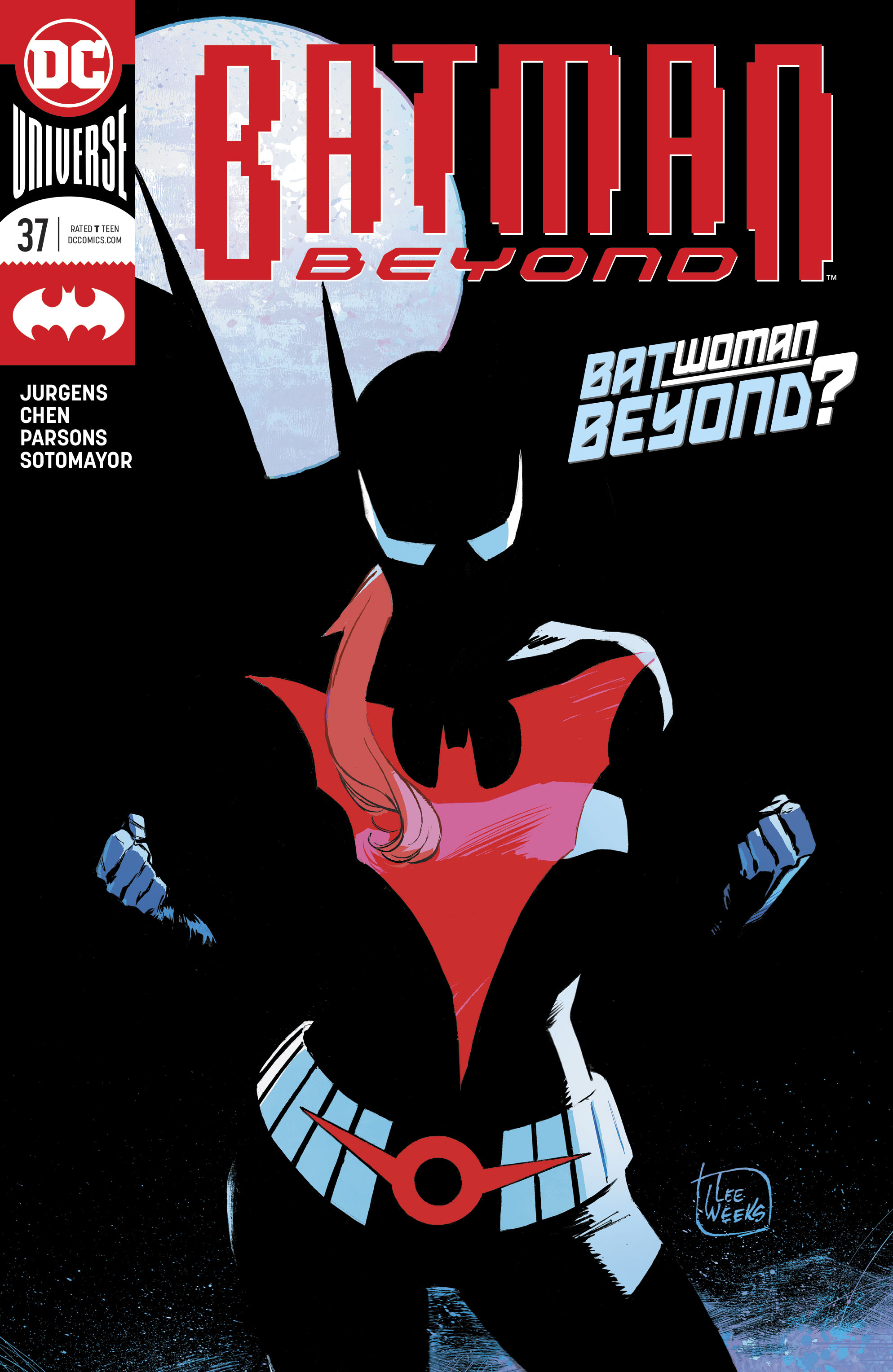 Synopsis (spoilers ahead): Decades from now, Matt McGinnis descends into the Batcave, unable to sleep over worry for his still-missing brother Terry. The voice of the Batcave, ALFRED, relates that while every monitoring system available is on the lookout, there has been not the slightest trace of the missing hero. However, Matt gets excited once he realizes that the Batsuit is missing. That can only mean one thing; Terry is back!

Elsewhere, in Old Gotham, a pharmacy employee is locking up for the night. Until that is, she is held up by two crooks demanding her to let them in so they can get a substance called ‘the mix’. No sooner have they made their intentions clear than the nearby streetlight shatters, enveloping them all in darkness. In a matter of seconds, the thugs are taken out as the stunned victim picks up a Batarang.

In Neo-Gotham, Jack Ryder hosts a news broadcast, detailing the rumors that Batman had been replaced by False Face and that Batman has not been seen in several days. The veteran reporter is interrupted by the woman who was threatened previously, saying that Batman has in fact returned, and shows him the Batarang as proof. While still skeptical, when his camera-bot alerts him to a nearby crime, he takes off towards it in the hopes of seeing Batman himself.

At the scene of the crime, an officer is being assaulted by a criminal group calling themselves the Slamjackers. As one of the villains prepares his deathshot, he is quickly disarmed and taken down, as well. The other two Slamjackers, thinking their partner too slow, go in for the kill themselves when they, too are handily beaten. Jack Ryder shows up a moment too late, but the evidence is clear that Batman is back.

In the heart of the city, an amnesiatic Terry and his partner flee from the police after robbing a convenience store for food. After sucker-punching an officer, the two runaways introduce themselves to each other. Well, Terry doesn’t. He doesn’t know who he is. But we discover that his new partner, Constance Gustinov, had been jailed for her experiments as the head of research at Powers. Lacking ample time for chitchat, Terry and Constance hotwire a delivery car and speed away.

Back at the Batcave, Bruce and Matt watch Jack Ryder’s broadcast. While Matt is convinced his brother has come back, Bruce is full of doubt.

In a park Boffo, the last free member of the Jokerz, holds hostages in demand for the rest of his gang’s release, as well as the whereabouts of the real Joker, whose body had disappeared from the morgue. As he makes his demands for the cameras, however, the hostages had been rescued one-by-one until there was one man left. Boffo aims to kill the remaining hostage before he is given an uppercut by the still-unseen Bat. With a final effort, Boffo tosses a grenade to kill the Bat in revenge. The Batsuit protects both its wearer and the hostage, however. Jack Ryder arrives on the scene and makes his way through the crowd as the smoke clears and instead of seeing Batman he sees a Batwoman. The smoke clears, but the air of confusion remains on the citizens as Batwoman takes off.

In the cave, Matt and Bruce deliberate. The suit’s tech adapts to its wearer, so gauging an identity is problematic. Matt believes Batwoman to be Melanie Walker (the former criminal member of the Royal Flush Gang known as Ten), while Bruce believes it to be Barbara Gordon (formerly Batgirl and currently the commissioner).

In a Powers Research Facility multiple guards have been attacked as we find Blight (Derek Powers reborn again) who overhears the Ryder broadcast and, while fitting himself into a mech suit, vows that the Bat will be his next victim, after he disposes of Bruce Wayne.

Analysis: The first issue of this arc starts off pretty strong, giving us a high-action pace while teasing us by keeping the Batsuit away from our field of vision. It was reminiscent of the ’89 Batman movie with the shadow of the Bat enveloping the criminals, along with tones of the original Teenage Mutant Ninja Turtles like the lampost shattering, the victim finding a weapon left behind after the fight is over. I also love the nod to classic Batman art with Batwoman’s reveal, pitted against a brick building and in full view of a spotlight, tying this at least in part to canon.

The amnesiac hero is quite a tired and ancient trope by now; something we just have to roll our eyes and live with at times. But Jurgens, in my opinion, handles it well and actually I find myself caring far less with what happens to Terry McGinnis, our Batman since the 90s cartoon, than with the story that is being told now.

There is a great layering done in this issue that is worth mentioning. We have our nods to ‘classic’ scenes from earlier times meshed with the futuristic tech of the times. We have two separate but similar crimes shown; one in Neo Gotham involving some armor-tech-clad villains attacking a futuristic officer, and a more familiar scene in Old Gotham showing a mugging by some simple street thugs. You’d think that, in the ‘future’, hotwiring wouldn’t be a thing, but I guess the more things change, the more they stay the same. Perhaps that is where Jurgens is going with his storytelling. We can pretty-up our ideas of what the future holds and make everything so idealistic and exotic, but we will always have the shadows of the past, our Jokers return, to remain a Blight in our wishes.

Another layering includes Matt assuming that Batwoman is Melanie, which I thought was obvious myself. But Batwoman’s ‘hair’ is red, throwing us off a little, and perhaps leading to Bruce’s guess that it’s Barbara. I think this Mystery of the Batwoman will drag on for another issue or two, but I’m puzzled by Bruce’s guess. While the red hair is a throwback to Batgirl, it’s far longer than our Commissioner’s shoulder-length ‘do. Also, Babs is not only getting long in the tooth like Bruce himself, but has time and again shunned the idea of suits in this series, only tolerating them as inevitable. But, still, a fun idea.

Final Thoughts: This issue is very much filled with world-building, and quite frankly I love it. Just as the stories seem to grow a little stale, Jurgens shows he is not afraid to reinvent the universe and inject a bit more color into it. It feels fresh and promising.