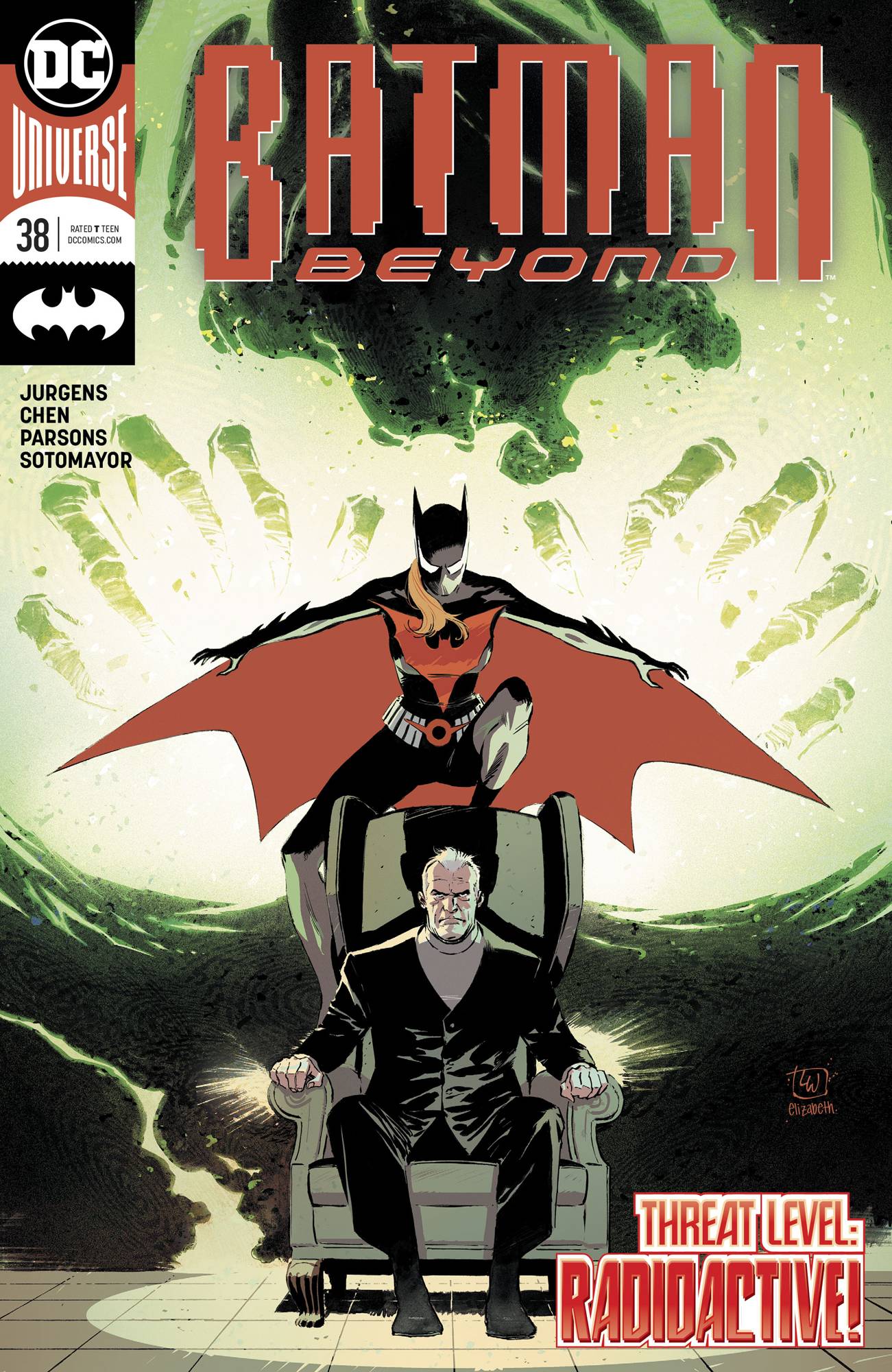 Overview: As the mystery of the Batwoman deepens, Terry runs further from the truth about his identity, and an old villain rises again.

Synopsis (spoilers ahead): Decades from now, a tech-suited figure stealthily invades the Global Defense Center at night with the intent to steal, and then auction off, the Hover Gunner X. Before he can allow himself the hope of victory, however, the criminal is surprised and quickly dispatched by the Batwoman.

Bruce Wayne studies the footage through a viewing screen aboard his hover-car as he approaches the rooftop of the GCPD building, awaited by Commissioner Barbara Gordon. When asked what was so important that it couldn’t wait for a more convenient time, Bruce confronts her, convinced that the Commissioner, formerly Batgirl many years ago, is the woman behind the mask. Gordon ridicules the idea, stating that not only does she not have time to be both commissioner AND costumed vigilante, but is convinced that her police force is more than capable of handling crime in Neo Gotham without assistance from Wayne or his suits. Bruce, then, makes the only other logical conclusion: that Matt McGinnis was right in his deduction.

Elsewhere Melanie Walker, formerly the villain known as Ten of the Royal Flush Gang, sleepily opens her door as Matthew McGinnis bursts into her apartment and confronts her on his suspicions that she, herself, is the new Batwoman. Melanie laughs, saying that there would be no way that she’d risk crossing Bruce Wayne’s wishes. Matt, dejected, confides to her that he had wished she was Batwoman, hoping she’d be able to find Terry, who is still missing following False Face’s mental wipe.

In the streets of Neo Gotham, Terry and his friend/accomplice Constance, looking very much like the homeless beggars that they are, approach a food vendor and order food, using an identification card as payment. The card being unable to confirm Constance’s lifted identity, her retinal is scanned and with her experience at Powers industry, manages to fool the system into ‘recognizing’ her as the stolen identity and the couple is able to get a nice, warm meal. They are surprised, however, when the commissioner calls out to them, using Terry’s name. The GCPD was able to find them after identifying the truck they’d stolen not long ago. Gordon tries to plead with Terry to come with her and to get his head back together, but Constance persuades him that it’s a trick, and the duo make their escape by jumping from the bridge and towards certain death below….if it weren’t for the turbo boots they both had confiscated from the truck they had stolen.

Safe from the police, they land on a roof, and Constance reveals to Terry that the reason that she herself is a criminal is that she fell in love with Derek Powers. As the head researcher for his biomechanical engineering program, she had also been his right hand from the very beginning of the Wayne merger to his transformation into Blight. Eventually her devotion to Powers landed her in jail.

At Wayne Enterprises Research, a couple of henchmen dressed as security guards discuss the surprising return of their boss Derek Powers, or Blight, who himself has infiltrated the building. The two are surprised as Batwoman appears and disarms them before crashing through a window and into the building herself.

An intrusion at the facility alerts Bruce and Matt in the Batcave through Alfred, the Batcomputer. Alfred informs them of an abnormally high radioactive presence as a live feed shows Batwoman creeping through the premises. As a voice familiar to Bruce cuts through the darkness of the building, an explosion knocks Batwoman to the ground, and Blight appears on the screen and lifts her into the air single-handedly, preparing to kill the stand-in.

Analysis: This is another pretty straightforward issue, utilizing action and pace to move the story forward at this time. Jurgens wants to keep us guessing at the identity of the Batwoman by further confusing us with the notion that she is the overburdened commissioner or the underdeveloped Melanie Walker. Terry, at the idea of finding out his name, instead elects to flee with Constance, which provides us a look at her origin story. We get nearly nothing on the supposed villain of the arc but an appearance at the end, which signals to me that the story has little to do with Blight but to use him as a means to identifying our new Batwoman and her motives.

Final Thoughts: While overall not a stunning issue, it serves to progress the story pretty well and to keep it on a definite track.