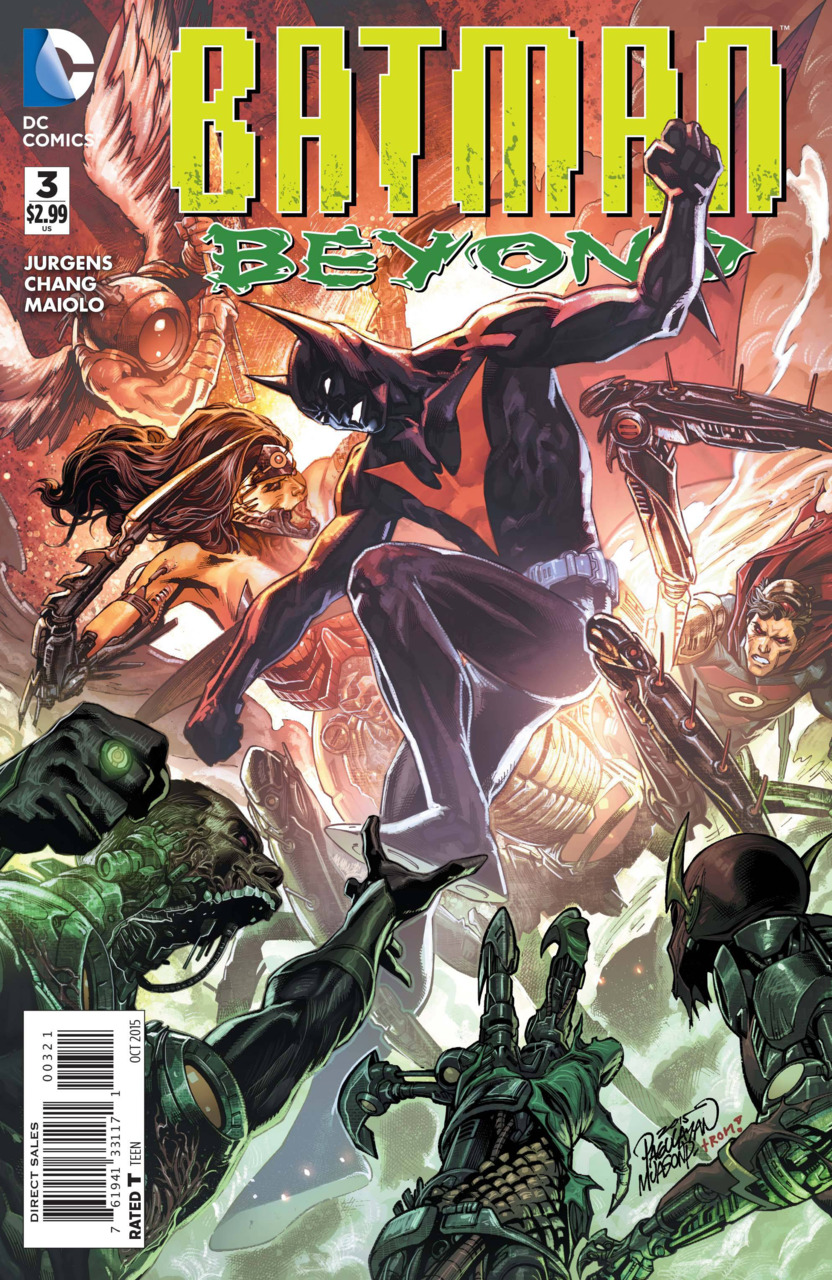 Brave New Worlds Part 3 opens at Neo Gotham. Nora and Matt are discussing the lack of news from Tim about the rescue of Max. Matt says that he knew Tim would fail and that Terry would have succeeded by now. Nora tries to get Matt to see that Terry had a reason to give the suit to Tim and he just needs faith.

Back at the Lodge, Brother Eye is interrogating Tim Drake by probing his memories from when he discovered that Bruce Wayne was Batman to his time as Robin and his leadership of the Teen Titans, to his retirement after the death of the Titans, his meeting with the future Batman, Terry McGinnis, and his own taking of the mantle of Batman Beyond. We see that Tim is strapped to the chair and is undergoing the same processing Max went through in the previous issue. We see Inque standing with a smiling Max and a captive Barbara. We see a vision of the cyborg Justice League and Barbara makes a reference to Barda and War Hawk. She is not sure that Brother Eye took out all of the Justice League. We learn that after Tim is processed, Barbara is next. Barbara questions why Inque is involved; all Inque says is that she is a survivor. Throughout all these exchanges we hear that A.L.F.R.E.D. is communicating with Tim with difficulty. Tim finally tells the AI to shock him in order to snap him out of the processing. It succeeds and the suit is reactivating covering his face. Batman attacks Inque. While Batman and Inque fight, Brother Eye moves to process Barbara. We cut to a position above the Earth. We see a woman and an entity. The entity has its back to the woman and is talking as Brother Eye. The woman sneaks away and we see that Eye was expecting her to leave. The woman makes contact with Inque while there is a lull in her fight with Batman. We learn that the woman is named Deanna and she is being held captive on the moon. Batman hears this and we also learn that Deanna is Inque’s daughter. Batman offers to help her rescue her daughter. Barbara fights the processing and Batman attacks the cyborg holding Barbara down. Inque gets away and Batman takes off with Barbara and Max as the Lodge is destroyed.

Back in Neo Gotham, Matt and Nora are rushing into a hospital room. They find Batman, Barbara, and Max. Max is being treated to flush the Eye’s influence from her. She is expected to make a full recovery. Matt and Tim have a discussion where Tim extends his hand to Matt in friendship. Just then A.L.F.R.E.D. detects something, and needs to be cleaned out but we soon learn that the veil is gone and so is the AI. Brother Eye has replaced it. During the processing, Brother Eye used a needle but it was not intended to inject Drake, instead it injected the suit basically making the suit into a Trojan horse. Brother Eye just hitched a ride into Neo Gotham. We close with Tim face to face with Micron from the Justice League Beyond and he is not a cyborg.

The majority of this issue was a fight but I found it very entertaining. We learned a little more about Inque’s motivation and why she was helping Brother Eye. We also get a glimpse of what could be allies for Tim in this world. Barbara drops the names of War Hawk and Barda both characters that make up the Justice League of the Batman Beyond universe. We also get a glimpse of Micron a character I first remember seeing in the Justice League Beyond comics a few years ago. It is good to see that Tim may not be alone after all.

I liked the twist in the end that Brother Eye hitched a ride in Tim’s suit to find Neo Gotham. This book keeps me wanting more and that is a good thing.

It is good to see Barbara as a fighter here, I really like seeing Barbara Gordon the fighter, it is easy to see that she was Batgirl and the commissioner of the Gotham Police Department. I am also happy to see that Max will be making a full recovery as well, if she is like her animated counterpart, she along with Barbara will be able to provide the tech assistance Tim needs badly, now they just have to get Brother Eye out of the suit.

This title continues to draw me in and I cannot wait for next month.