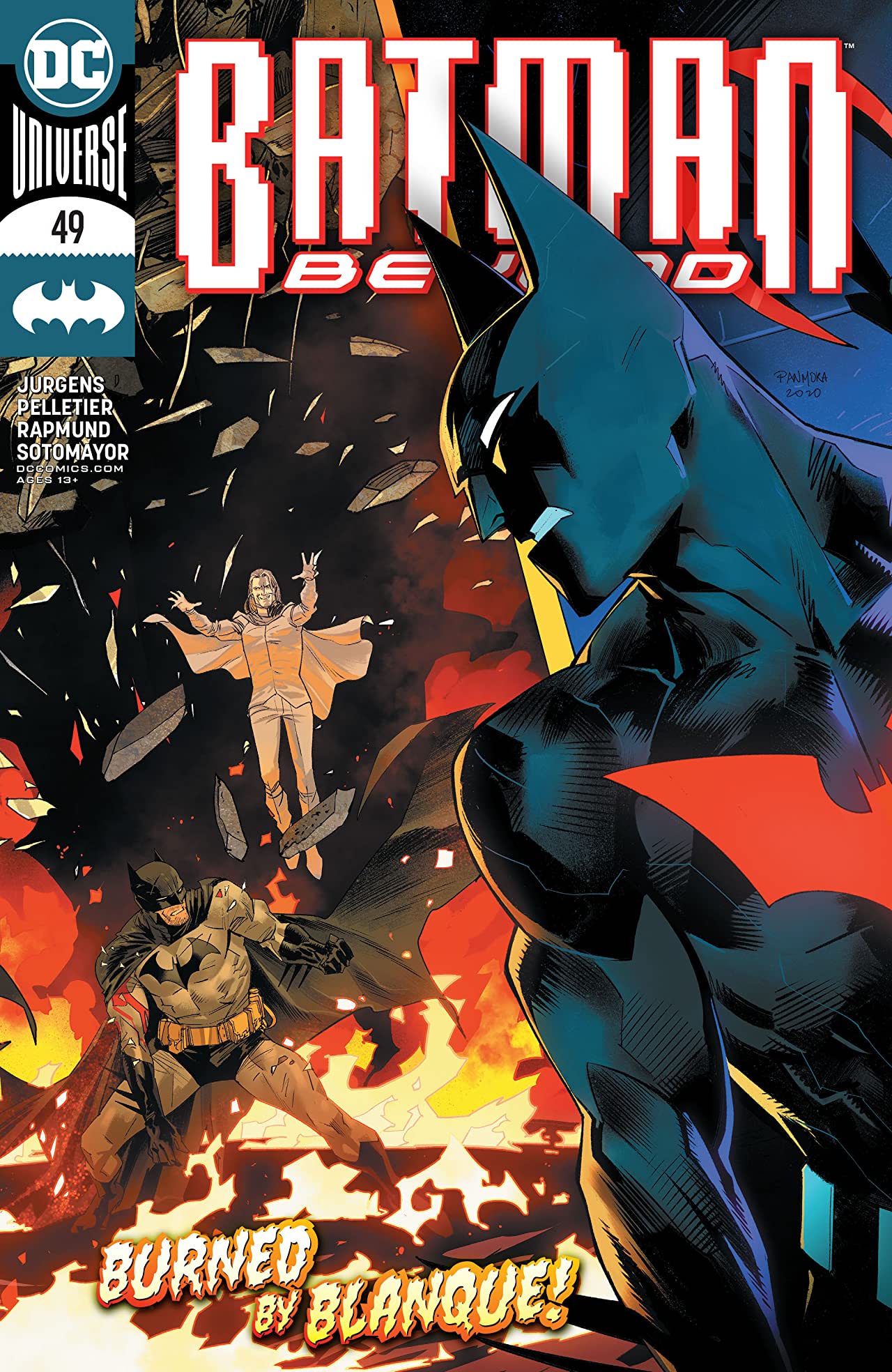 Overview: Batman fights Booster Gold in the DC Universe’s present with the help of Booster Gold and the unknown help of a Batman from the future.

Synopsis (spoilers ahead): “Cancelled by Yesterday Part Two” begins with future Batman and Warren McGinnis, the future father of Terry in the middle of a firestorm.  We get a recap on the first page with Terry telling us that Bruce in the future went crazy and murdered his younger brother Matt, thinking he and Terry were assassins.  Running into Booster Gold who told him that a thought bomb had been placed in Bruce’s head in the past which detonated.  Then he took Batman Beyond back in time to prevent that from happening.  Now he is face to face with his father as a child.

We get a recap of Terry’s life and his eventually taking on the mantle of Batman after the death of his father.  Now Batman and young Warren are trapped in a firestorm caused by the villain Blanque who is believed to be the villain who originally implanted the thought bomb in Bruce Wayne’s head.  If Warren dies here, there will be no Terry McGinnis to become the next Batman.  The situation is more complicated than that.  Outside the firewall is this era’s Batman, Bruce Wayne himself, and he thinks that the man with the boy is going to hurt Warren.  Booster Gold shows up and says that the guy on the other side is his friend and he is here to protect the kid.  Batman assumes that this must involve time travel since Booster is here.  Booster says that it does not, and Skeets corroborates Booster saying that they just think Batman will need help in subduing Blanque.  Afterward, Skeets calls Batman, sir to Booster’s surprise.  Batman has not heard of Blanque, but Skeets reports that he has fought Superman and has telepathic and telekinetic powers.  Batman turns to go after Blanque while Booster chides Skeets for calling Batman sir and not him.

Batman, Booster, and Skeets arrive to engage Blanque who throws a bus at them.  Booster deflects the bus with his shield.  Meanwhile, Batman Beyond flies Warren out of the firestorm to safety.  He cannot stay with the boy, he has to help Batman and Booster Gold.  Warren is scared and does not want him to go, Terry tells him that he has to as it is the right thing to do and Skeets flies over to time his report to Terry.  Batman Beyond leaves Warren with Skeets.  Warren comments on Batman’s new costume and Skeets tells him that it is only developmental and will require more work before he uses it again.

The fight does not go well for Batman and Booster.  Blanque is using his powers to throw them around.  Blanque tries to read Bruce’s mind, but he is finding it difficult while he is still conscious so he makes him unconscious.  Booster tries to jump in but Blanque is able to control his muscles and aims his blasters at Batman.  This is broken up by Batman Beyond who punches him in the face.  Blanque uses Booster to blast Terry.  Blanque realizes that this is the Batman of the future and he wants to know all of his secrets.

Back with Warren, Skeets monitors that the fight is not going well.  He has to leave before it is too late.  Warren realizes that it is the right thing to do and Skeets flies off.  Warren learns that there is a time when everyone is faced with the choice to do the right thing.

Batman Beyond and Booster are both being soundly defeated by Blanque.  Blanque even attempts to force Booster to blast himself but Skeets intervenes.  He flies into his face breaking his nose freeing Booster to blast him and giving Batman Beyond the chance he needs to level the knockout blow.  Skeets scans all aspects of this event and there is no effect.  Blanque will not plant the suggestion.  Booster tells Terry he better go before Bruce wakes up.  As Terry flies off Booster makes an interesting comment saying that McGinnis actually bought all of it.  Bruce wakes up and questions that Booster could take out Blanque by himself.  He then offers his services as a new sidekick.  Batman declines and Booster flies off with Skeets.

Terry checks on Warren.  Terry finds him okay and tells him he is going to have a great life.  As Terry flies off, Warren promises not to mention the new suit.

Back in the future Terry arrives at the Bat Suite and finds Matt alive and Bruce okay.  Terry asks if Bruce flipped out and he said no.  Terry declares that it worked Booster helped him change time.  Bruce questions the presence of Booster Gold.  Terry recounts his adventure with Booster and he and Matt goes off to get the pizza leaving Bruce Wayne alone.

Bruce says that they are gone and he can come out.  It is revealed that an older Booster Gold was there and Terry thinks he changed time but they know better.  Matt will keep the stunt secret and that him turning on them was an act.  Bruce discovered Warren McGinnis’s journal and reviewed it.  It recounts being inspired by Batman’s heroism to do the right thing which included reporting Derek Powers to the authorities.  The complication was that Batman was flying with red wings and the command to keep it secret.  The only explanation was that Terry traveled back in time and met his father as a boy.  Bruce needed a facilitator to make that happen.  The younger Booster Gold was the perfect person to carry it out.  If it wasn’t for this “story” there would be no Batman in the future.

Analysis: I liked this story until the end.  I will get into that a bit.  The overall concept is interesting but often used the cliché of traveling back in time to fix an event of the future.  Admittedly this story does have a twist in the end which further complicates the character of Bruce Wayne.

The storyline here was good.  The action was clearly depicted in the art and the dialogue made sense and at times was amusing.  For example, the part where Skeets calls Batman “sir” is humorous.  It grates on Booster Gold’s personality and needs to be the center of attention and it really makes it look like Skeets has a personality and knows how to get under Booster’s skin.

The use of the vernacular “Schway” was also used interestingly.  It is shown that the son of Warren McGinnis himself told his own father what it meant and then seeing it become a normal part of Warren’s vocabulary is funny.

The art here is good.  With the use of the fires and debris in the background it ups the ante of the fight.  It looks like someone can die here and increases the danger level.  That along with Blanque’s power set makes it look like the villain is capable of winning this contest which will have ramifications for the future.

My chief complaint with the art is the panel that shows Batman running.  It really has no realistic look to it.  It almost gives me the impression that Batman is out of shape physically.  That could be an unfortunate consequence of seeing it head-on.

The ending is teased by Booster not believing that Terry bought the entire affair.  When I read it, I was not sure what was going on.  The characterization of Booster Gold has always in my opinion been a little dishonest.  Batman himself even eludes to Booster stealing tech from the museum so he could go back in time and become a “hero”. He, after all, did throw a football game and that is what led him to become a guard at the museum.  Using Booster’s desire to become Batman’s sidekick was quickly used to change the subject.

This book for me hinges on the last pages.  It is the fact that the whole scenario was a façade from the beginning that is troubling.  Bruce Wayne in essence decided to make sure that history would be fulfilled by creating this scenario where Terry McGinnis as Batman would go back in time and meet his own father to inspire him to basically set himself up for his own murder.  In essence, Bruce Wayne could be considered an accomplice of the crime that led to Terry becoming Batman out of tragedy.  My question is why did this story have to be told.  It is obvious that Batman exists in the future.  Booster himself arrived at the conclusion of the League of Assassin’s attempt to change the climate of the world to kill off the population.  That plan was thwarted by not only a Batman but a Batwoman and the Grandson of the Demon himself Damian Wayne.

Final Thoughts: The story is fun but again the character of Bruce Wayne has been tarnished even now that he is no longer Batman. After finishing the issue, I was just left with the question of why.