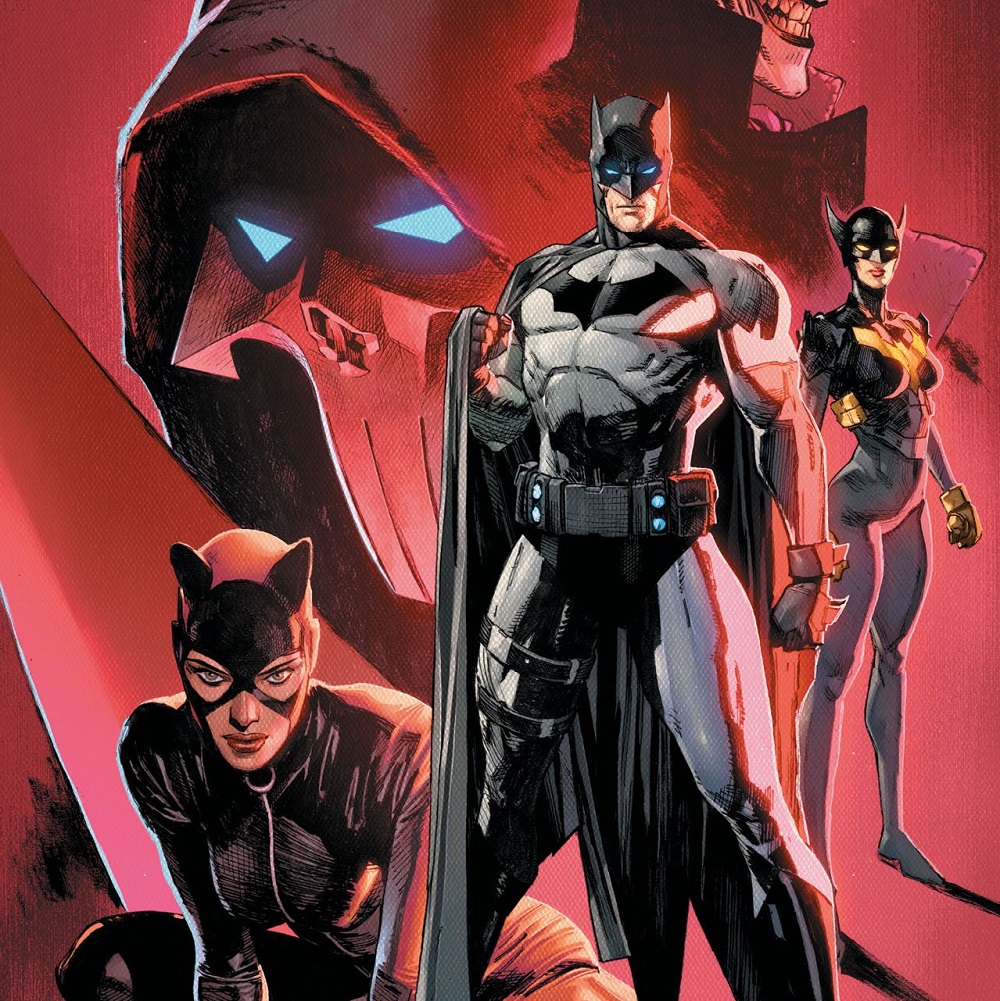 Overview: In Batman/Catwoman #5, the Phantasm takes Catwoman to pay a visit to one of Joker’s recruiters. Meanwhile, an elderly Harley Quinn seeks revenge on an elderly Selina Kyle for murdering the Joker.

Synopsis (spoilers ahead): Batman/Catwoman #5 begins in the future, with an elderly Selina Kyle sitting in Wayne Manor reading a book while “Jingle Bells” plays. She hears a crash, then looks out the window. Much to Selina’s surprise, Harley Quinn has crashed a car just outside of Wayne Manor.

Harley screams that she knows what Selina did to Mr. J, threatening to kill Selina for it.

In the past, an intoxicated Selina Kyle tells a barkeep that she’s not going to pay for all the alcohol she just drank. She tells the bartender that she’s going to steal it, and she does so by knocking the man unconscious with an empty bottle of booze. Selina starts singing “Jingle Bells, Batman Smells” on her way out of the bar.

In the present, Selina Kyle, still held captive by the Phantasm, gets dressed in her Catwoman suit. The Phantasm tells a bewildered Catwoman that they can still fight, but there’s something that Catwoman needs to see first.

In the future, Selina greets a pissed-off Harley with a fist. Harley is here to kill Catwoman for murdering the Joker, something she was always told by Joker would happen someday. During their fight, Harley reveals that Joker had a soft spot for Catwoman, that he’d speak of Catwoman’s awful past with tears in his eyes.

Catwoman subdues Harley while Harley screams about Selina murdering Joker before Harley got the chance to.

In the past, Selina drunkenly stumbles down an alley with another bottle of booze in her hand. She wants to steal something, and she playfully consults with an alleycat over what she should steal. Before Selina decides on what she wants to steal, the cat walks away, and Selina screams at it for abandoning her like her mother, father, and Batman did.

In the present, the Phantasm has taken Catwoman to a captured man named Sal Neismann. Sal hangs from chains, and Phantasm tells Catwoman that this man, this Joker fanboy, works as a recruiter for the Joker. Sal finds other Joker fans and brings them to Mr. J, who returns their love by testing Joker toxin on them.

Phantasm tells Catwoman that this is the moment where the two can fight, if Catwoman would choose to. Then, Phantasm tells Sal that his angel of death awaits.

In the future, Harley and Selina continue to fight. During the fight, Selina tells Harley that she’s very much like Batman, which is why she couldn’t kill Joker. Both Harley and Batman are too good to be bad, whereas Catwoman always has been too bad to be good.

In the past, Selina falls through the roof of a museum exhibit and lands atop a skeleton of a dinosaur. Batman arrives and carries her unconscious body back to the Batmobile.

Back at the Phantasm’s base, which is also the same World’s Fair exhibit Joker used as a hideout in Batman: Mask of the Phantasm, Andrea Beaumont and Selina talk. Andrea is taken aback by how different Selina is. She assumed Selina would be consumed by Bruce. Selina responds by saying Andrea is the broken, psychotic killer that Selina always assumed.

In the future, Helena Wayne marches into Wayne Manor to find a subdued Harley lying before a resting Selina, who is enjoying a glass of wine and comfort from her cat. Helena asks Selina what happened.

Analysis: As always, the art in this series is phenomenal. Clay Mann and Tomeu Morey make an incredible team, and together, they’ve created one of the most beautiful books in DC Comics right now. Of particular note, the Phantasm design is incredible, especially in Batman/Catwoman #5.

Readers get a much better, full look at Andrea Beaumont inside and out of her Phantasm suit, including one incredible full-page panel of her suiting up. The costume is fantastic. It’s both armored and tactical, yet carries enough of a spectral motif to feel ghostly and haunting. It’s really neat, and the eyes on the Phantasm mask are wonderfully iced blue, which matches the running theme of the holidays and winter in this series.

The story, however, is a bit sparse in Batman/Catwoman #5. Each of the three time periods focuses on Selina Kyle. In the future, Selina battles a revenge-seeking Harley Quinn for the murder of Joker. This thread runs throughout the issue, and its point seems to emphasize how Catwoman is different from both hero and common rogue. She relates Harley to Batman, suggesting that Harley was once a good person before becoming Joker’s number one henchwoman, much like Batman always was a good person at his heart. It’s why neither can murder the Joker.

This idea carries into the other story threads found in Batman/Catwoman #5, one wherein the Phantasm takes a captive Catwoman to watch her butcher one of Joker’s recruiters, to which Catwoman does nothing to prevent the murder. The other thread takes place in the past where Selina finds herself drunk, assaulting a bartender, and failing to steal something valuable from a museum. In this subplot, Batman saves her and takes her back to the cave, which seems to disprove the idea that everyone always abandons her.

Together, these three storylines center around the idea that Catwoman has always been a bad person who has entertained fleeting moments of doing good. The story is positioning Catwoman to more closely align with the Joker in how rotten she is at her core as a way to further explain Catwoman and Joker’s close relationship that’s been shown throughout previous issues of this run.

It’s an interesting take, and the idea is just enticing enough to keep readers following where writer Tom King and artist Clay Mann are taking this story. For this standalone issue, however, there’s really nothing here that advances any sort of plot. This issue is a character study issue, and it ignores the overarching stories of Helena Wayne investigating the Joker’s murder or Batman investigating the death of Andrea Beaumont’s son. It’s a diversion, and in a way, it almost feels a bit unnecessary.

From previous issues, we know Catwoman is almost a foil to Batman. We’ve been made well aware that Catwoman’s duality is that she has qualities that can be Batman-like, as well as qualities that are very much in line with the Joker. Previously, we’ve been introduced to the idea that Catwoman struggled with her identity. In Batman/Catwoman #5, she’s fully embraced her darker side, seemingly content with who she is in her old age. This could be hinting at the idea that for a while at least, Batman either influenced (“consumed” as Andrea called it) her or saved her, but that also seems like a vague and moot idea to tease if that’s the case, especially since this flies in the face of what we’ve seen in past issues.

Regardless, this issue retreads on who Selina is at her core and forsakes any sort of momentum in the plot in doing so.

Batman Catwoman #5 is yet another beautiful issue where not a lot happens. We dive deeper into who Catwoman is as this story reaches Hamlet levels of psychoanalyzing.