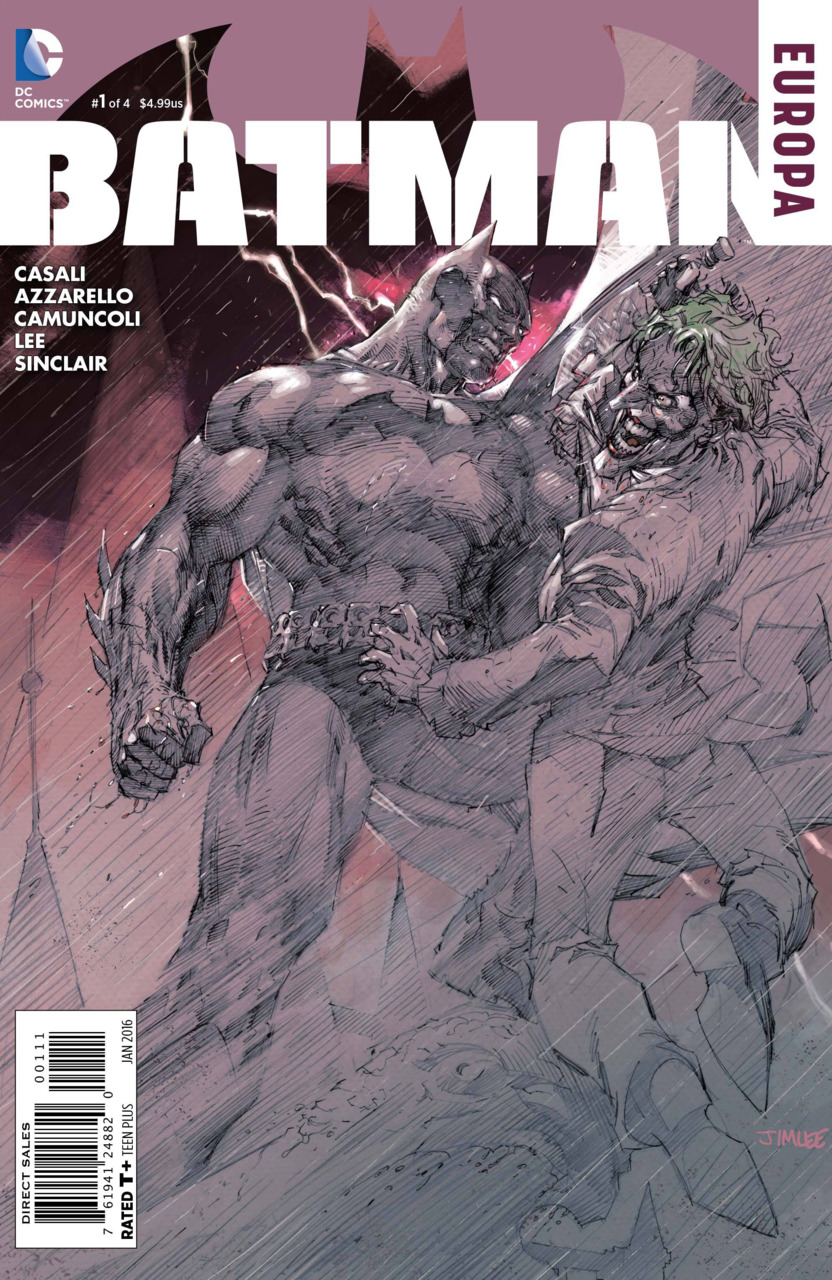 Batman: Europa has finally dropped and now onto the review. This comic series was first announced 2004 and finally has come into fruition. This first installment of the four part series gets all the bells and whistles of a book DC hopes sells very well. It’s going to be an expansive journey across Europe and as a virus unites Batman and the Joker on a mission to find a cure. Let’s all jump aboard onto our flight in Gotham International for a quick jump across the pond.

This book promises us a straightforward story and doesn’t have to pander to the continuity issues DC Comics struggles with at times. The story starts with a cold open of Batman and Joker bleeding heavily and both looking exhausted. Batman and the Joker appear to be near death and running out time. We are left to wonder what happens next as the story back tracks to seven days earlier. Batman: Europa left me aching for more and hopefully peaks your interest.

Berlin is the first installment of this four part miniseries as we see Batman is going at it with Killer Croc, which takes me back to Hush when Jim Lee’s Batman jumps out from the pages. Batman is having an internal dialogue that Croc is beating him in hand-to-hand combat and his punches and attacks are not slowing Croc down. Batman finally is able to string together an attack to take down Killer Croc, but it leaves him exhausted and bewildered. Something is obviously wrong with Batman and Alfred has some unpleasant news for Bruce. Alfred informs Batman there is a situation developing back at the Batcave.

The Bat Computer is infected with a computer virus called Colossus that informs Batman that he’s infected with an actual virus that will kill in seven days. Batman takes off his gauntlets, lifts his hand and stares at his red fingertips. Alfred figures out where the hack originated and Bruce books his own private flight on Batwing to Berlin.

Batman arrives in Deutschland and starts to follow a known criminal as he’s working a score. The crook runs away in terror screaming “Mord”, which is murder auf Deutsch. Batman enters and sees the classic evidence that Joker has been here earlier; dead bodies with big smiles. Batman blitzkrieg’s the German underground in in his effort to find the Joker. Batman catches up with the Clown Prince of Crime as he is threatening a German hacker. She is terrified and his dialogue with her is some of the best lines I’ve ever read. I don’t usually get the feels when read comics, but his threats gave me chills and sent them down my spine. It appears the Joker is on the same trail as Batman. Before the Joker can harm the female hacker Batman makes his entrance and beats Joker into submission. Joker holds up a red hand revealing he has the same virus as Batman, thus they share a common foe. The hacker reveals that somebody did reach out to her and paid a large sum of money to hack certain sites. She shares that she didn’t know who hired her, but that the money and Trojan Horse she delivered originated from Prague. Batman and the Joker reach a tentative semi-verbal agreement that they are going to need each other. Why Batman decides to bring the Joker along is anybody’s guess, but it hopefully will provide some fun back and forth between Batman and the Joker. The installment will take us back to the Soviet Bloc when Batman and Joker visit Prague.

This was a really fun story and the combination of Giuseppe Camuncoli and Jim Lee art helped create a truly engaging story. I’m curious how this will hold when Lee departs Batman Europa. The script and story are in safe hands with Matteo Casali and Brian Azzarello. The dialogue is memorable and is a solid original story. My only issue with Batman Europa is this glaring hole in the plot. They haven’t created a meaningful reason why Batman and the Joker need to do find the cure together. Hopefully they create a meaning connection between them and makes us believe they need to together.