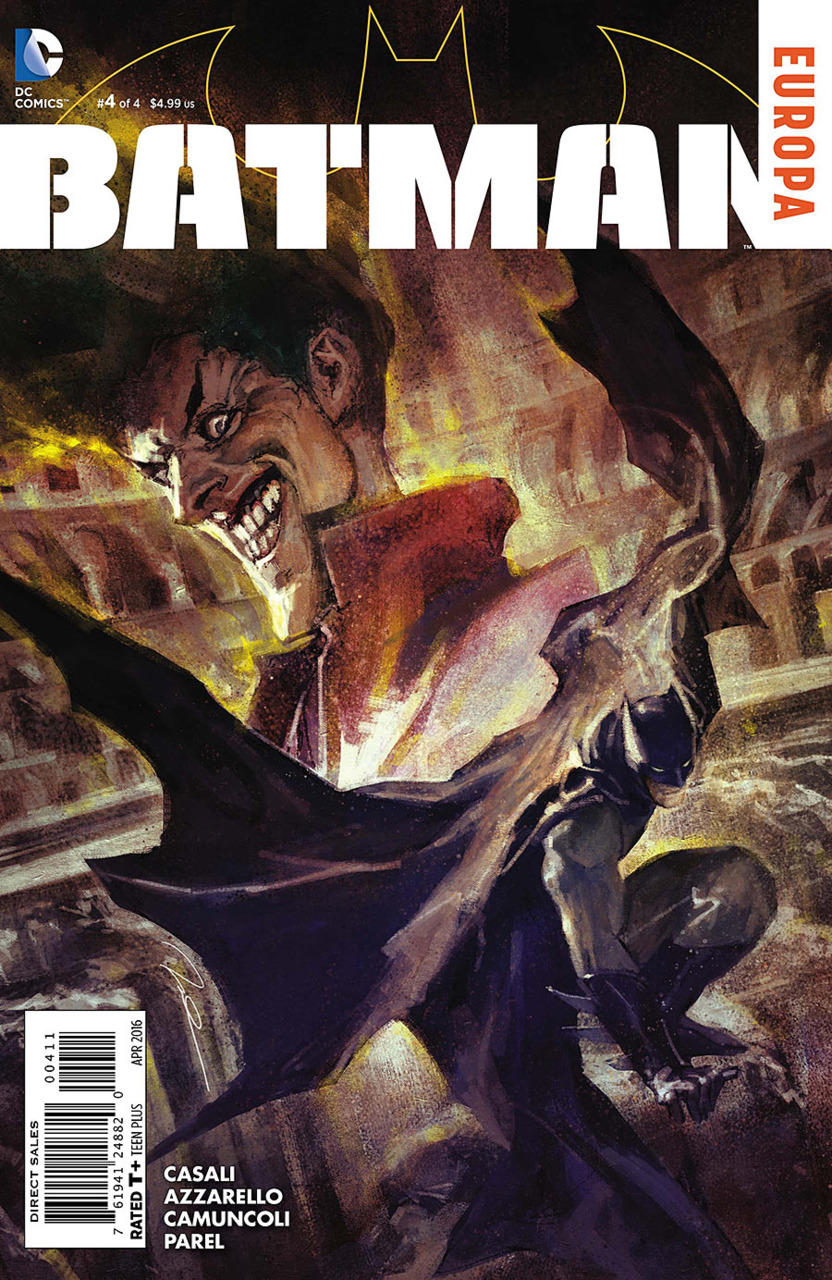 So the end is here and I was excited to find out who the creepy clown like devil who was playing games with Batman and Joker. I’ll get to this later on in the review, but it proved to be underwhelming. Batman: Europa #4 benefits from solid art by Gerald Parel who worked with the layouts by Giuseppe Camuncoli, which helped comic have a European feels. I feel my excitement for this comic was delayed and probably helped with the underwhelming ending. Matteo Casali and Brian Azzarello provide two very different portrayal of Batman and Joker and I was a fan of this development.

This was an important change out for the two protagonists as they are facing certain death due to the virus. Batman becomes a reckless/apathetic and Joker desperate and worried. Batman throws his concern for his mortality and Joker becomes anxious about living. Some of the back and forth between Batman and Joker provide some good chuckles. Joker is loving the team up as Batman’s patience begins to wear thin.

Rome provides the perfect backdrop for a final showdown for our heroes versus our mystery villain. I’ll take some time to give my thoughts on the reveal of the final villain. In Batman: Europa #3 when we first see the villain over the dead body of Nina I was enthralled. He was truly scary and gave me the chills. His devil like appearance gave the perfect foreboding that Rome would provide a nice mix of heaven and hell.  For anyone who has been to Rome and/or the Vatican, you know that it has a very gothic feel and the mixture of dogma and politics mixes like dangerous lovers.

Eventually we see a handsome man talking to Batman and Joker and explaining some of the finer points of the virus that is causing our heroes to quickly decompose.  Our villain takes off his oversized trench coat and puts on his mask and poof, Bane. It is revealed that Bane is the master mind behind the virus. Why he dragged them around Europe is anyone’s guess. I was really hoping for a compelling reason the story took place in Berlin, Prague, Paris and Rome. There is a fun three way fight between Batman, Joker and Bane. Joker becomes even more desperate and doesn’t care who dies if he lives. Through the fight Batman learned the antidote is in each other blood.  They’re already bloodied up and swap blood. They’re pretty much instantly cured, but Batman is still a bit on the psychotic side. It eludes he beats Joker within an inch of his life and bam, the story ends.

Over all this story was okay. I’m curious to why they were motivated to publish this book. The story ends and really accomplished nothing. The art was the high point.