Batman in The New DCU #6 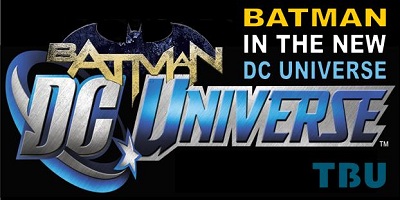 Though some of the newness may have worn off, DC Comics — The New 52 continues into its second month as I continue to chronicle all that we can learn from each week's books about Batman and his new history. I expect that these articles may become shorter as the issues focus less on establishing where we are and more on moving forward with new stories. But this week brought us Detective Comics #2, Justice League International #2 and several cameo appearances, so I'll be looking at those issues here.

Detective Comics #2 begins with a return of a familiar face and the introduction of a new one. Lucius Fox is still around, presumedly continuing to run the day-to-day operations of Wayne Enterprises, though we see little more from him this issue than receptionist-like duties. We also meet Hugh Marder, who will be working with Bruce to start up a new large business venture in Gotham. He notes that Wayne was in competition with Q-Core for the bid, which is a nod to the new Green Arrow series, and Bruce makes another reference to his philanthropic attitude toward building Gotham, which will lead to the organized rebuilding project we saw introduced in Batman #1.

We also get to meet the frazzled Charlotte Rivers of last issue. She and Bruce are definitely involved in a sexual relationship that doesn't seem to be based on the most solid of foundations, but who am I to judge the love choices of a man who dresses up like a bat?

We see Harvey Bullock have a conversation with Jim Gordon, who then fakes a cigarette break to get away from Bullock and see Batman. But we saw in Batman #1 that Batman also has a working relationship with Bullock. Maybe there's nothing here, but is it possible Gordon doesn't know that Bullock also talks to the Man in Bat? I dunno.

The villain of the story, Dollmaker, may or may not be Wesley Mathis, a cannibalistic serial killer from Gordon's first year with the GCPD. I don't think Mathis is the Dollmaker, personally, but Mathis is the only remaining lead by the end of the story. The Dollmaker does continue to work with several accomplices who seem to have familial relationships to one another, and none of whom seem to have their original faces intact. Matilda and Orifice are siblings, and she calls the Dollmaker her father. So this appears to be one big homicidal family.

The story ends with Gordon looking all sliced up and stitched like the faces of the Dollmaker's people, but I'm sure we can file this away under Misleading Cliffhangers since Gordon is alive and well in the other series we've been reading. And cuz he's Jim Gordon.

In Justice League International #2, Batman's presence on the team is learned by Andre Briggs, the U.N. representative in charge of the team. Briggs is not happy, but there doesn't appear to be much he can do about it. Batman continues to support Booster Gold in his leadership role, coaching and reassuring him on his team decisions and facing down opposition when it gets a little out of hand.

Batwing #2 gives us more information on that character's history with Batman. We saw Batman in the first issue helping Batwing with a drug bust and the investigation of the dead man who turned out to be Earth Strike, formerly of The Kingdom. That was six weeks ago. This issue shows us a Batman of eight months ago, setting Batwing up with his armor. We already learned that Dick Grayson was Batman for much of the last year. It would seem, though, that Bruce's return from "away" was more than eight months ago.

Penguin: Pain and Prejudice #1 spins a tale of the dark and unfortunate origins of the Penguin, while also painting a portrait of the world with which he surrounds himself. After the story builds this field of menacing confidence and security felt by Oswald Cobblepot in his world, Batman crashes through on the final page, completely knocking the Penguin off his feet. Is this a current-day encounter, or the first time the two met X years ago? This remains unclear for now, but future issues should illuminate. My first inclination is to read this as an early days story, but obviously I can't be sure.

In the rest of The New DCU, Stormwatch has warped the media in order to make it appear that the lunar attack on the Earth is being orchestrated by z-list villain the Fox. The Justice League responds, and Batman is among them: we see his boot. That's in Stormwatch #2. And over in Italy, it is clear that the Huntress has some knowledge of Batman. It's unclear yet exactly who she is and how she fits into the Batman branch of The New DCU, but in The Huntress #1, she ruminates on whether Batman is a better planner than she, or just luckier. Interestingly, we are teased in this week's All Access column about the character's Earth-2 connections in her original version. Could it be that there is a hidden connection in the actual story, and that her mention of "Batman" is actually the Batman of Earth-2?

Next month: Detective Comics #2: The fate of James Gordon